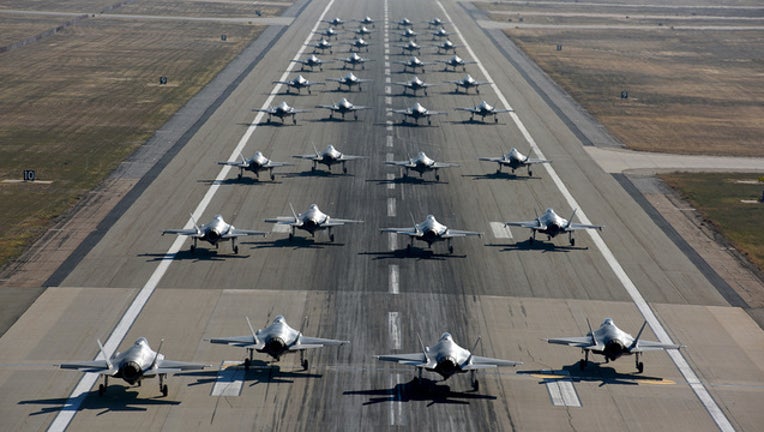 The Panhandle military base, a major economic engine in the region, was severely damaged by Hurricane Michael in October.

"We have recommended that the best path forward to increase readiness and use money wisely is to consolidate the operational F-22s formerly at Tyndall in Alaska, Hawaii and Virginia, and make the decision now to put the next three squadrons of F-35s beyond those for which we have already made decisions at Tyndall," Air Force Secretary Heather Wilson said in a statement.

Hurricane Michael on Oct. 10 damaged 95 percent of the buildings at Tyndall --- including aircraft hangars and flight operations structures --- leading to fears that the base, where pilots have trained to fly F-22s, would be downsized or shuttered permanently.

“These squadrons of F-35s are the future of the Air Force and will strengthen our national security, while reinforcing the role of our airmen at Tyndall Air Force Base,” Dunn said. “It’s clear the Air Force recognizes the importance of investing in Tyndall as a part of our defense strategy and we are working to get the base back to mission ready capability as soon as possible.”

The base has employed about 11,000 military and civilian personnel. A Pentagon study in 2017 put a $3.4 billion value on the facilities and projected the base’s annual economic impact --- combining payroll, expenditures and jobs created --- is $596 million.

When the Air Force announced a resumption of operations in November, the F-22 stealth fighters and related personnel that had trained at the facility east of Panama City were being spread across the country, from Eglin Air Force Base outside Fort Walton Beach to Virginia, Hawaii and Alaska.

“While Tyndall has a long road to full recovery, I am proud of what the base leadership, Air Force personnel and their families have been able to accomplish in the weeks since the storm destroyed most of the base,” Rubio said.

Gov. Rick Scott, who was elected to the U.S. Senate last month and whose term begins Jan. 8, called the funding request “great news.”

“@TeamTyndall will be the future home of 3 squadrons of F-35s,” Scott tweeted on Friday. “I spoke to @SecAFOfficial last night & she assured me that the Air Force is committed to rebuilding Tyndall AFB. We’ve been working for months & will continue to work until Tyndall gets fully rebuilt.”