The only lab that was able to process and report critical testing results such as for COVID-19 was partly destroyed during continued airstrikes in Gaza City, according to multiple reports.

The airstrike "sent shrapnel and debris flying across the street, damaging the lab and the administrative offices of the Hamas-run Health Ministry," the New York Times reported.

Some medical personnel were injured critically during the strikes, the Hamas-run enclave’s deputy health minister Yousef Abu al-Rish told The Times of Israel. 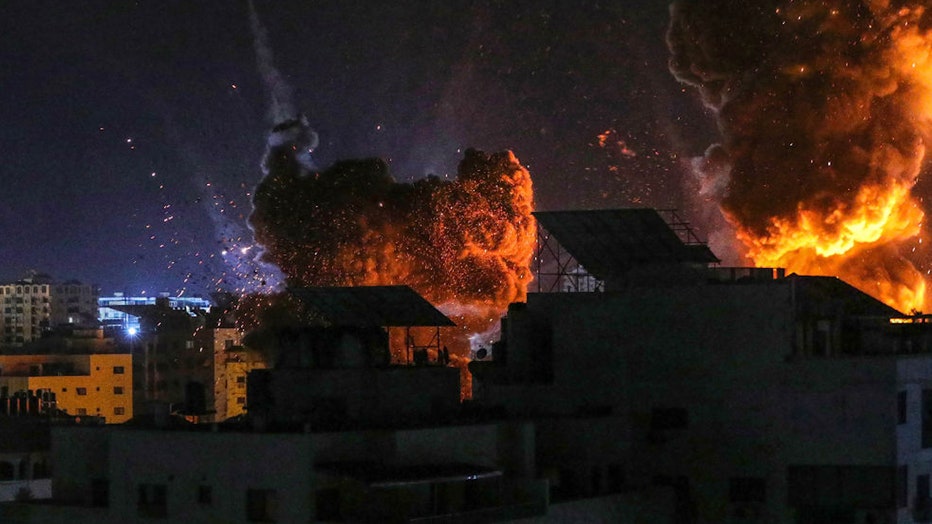 FILE - Fire and smoke rise above buildings in Gaza City as Israeli warplanes target a governmental building, early on May 18, 2021 in Gaza City, Gaza.

Not only will COVID-19 test results be postponed, but the lab will also temporarily have to delay test results related to HIV, hepatitis C and other conditions, the New York Times reported.

Last month, Gaza’s daily coronavirus cases and deaths hit record highs, fueled by the spread of a variant that first appeared in Britain, relaxation of movement restrictions during Ramadan, and deepening public apathy.

In the bomb-scarred territory, the need for personal survival often trumps the pleas of public health experts. Testing for the virus was already limited and the outbreak has infected more than 105,700 people, according to health authorities, and killed 976.

Medical supplies, fuel and water are running low in Gaza, which is home to more than 2 million Palestinians and under an Israeli-Egyptian blockade since Hamas seized power from rival Palestinian forces in 2007. Nearly 47,000 Palestinians have fled their homes.

Israeli attacks have damaged at least 18 hospitals and clinics and destroyed one health facility, the World Health Organization said. Nearly half of all essential drugs in the territory have run out.

The WHO said the bombing of key roads, including those leading to the main Shifa Hospital, has hindered ambulances and supply vehicles in Gaza, which was already struggling to cope with a coronavirus outbreak.

Israeli Prime Minister Benjamin Netanyahu alleged that Hamas military intelligence was operating in the building. U.S. Secretary of State Antony Blinken said Tuesday in Iceland that Israel had given the U.S. information about the bombing. Blinken declined to characterize the material, and Israel has not publicly provided evidence of its claim.

The fighting began May 10 when Hamas fired long-range rockets toward Jerusalem in support of Palestinian protests against Israel’s heavy-handed policing of the Al-Aqsa Mosque compound, a flashpoint site sacred to Jews and Muslims, and the threatened eviction of dozens of Palestinian families by Jewish settlers.

At least 217 Palestinians have been killed in airstrikes, including 63 children, with more than 1,500 people wounded, according to the Gaza Health Ministry, which does not break the numbers down into fighters and civilians. Hamas and Islamic Jihad say at least 20 of their fighters have been killed, while Israel says the number is at least 130.

RELATED: US 'working tirelessly' to help stop the violence as calls mount for Gaza-Israel cease-fire

Israeli airstrikes into Gaza demolished a six-story building housing bookstores and educational centers used by the Islamic University and other colleges. Desks, office chairs, books and wires could be seen in the debris. Israel warned its occupants beforehand, sending them fleeing before dawn. There were no reports of casualties.

The Israeli military has launched hundreds of airstrikes it says are targeting Hamas’ militant infrastructure, while Palestinian militants have fired more than 3,400 rockets from civilian areas in Gaza at civilian targets in Israel.