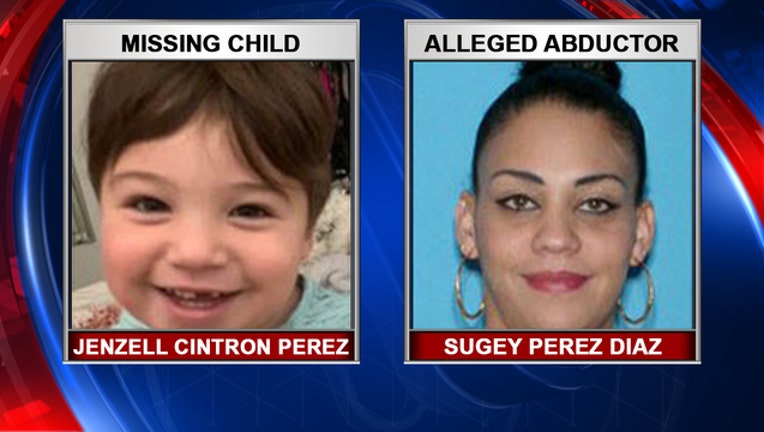 ORLANDO, Fla. - UPDATE: Jenzell has been found safe and in good health, according to Orlando police. His mother has been arrested under the warrant for armed burglary and aggravated assault.

The Volusia County Sheriff's Office said that the DeLand Police Department and U.S. Marshals made the arrest.

A Florida Amber Alert has been issued for a 2-year-old boy last seen in Orlando.

State law enforcement officials issued the alert early Wednesday morning for Jenzell Cintron Perez. They said he was last seen in the 1000 block of South Conway Road, and may have been abducted by 33-year-old Sugey Perez Diaz, his biological mother, according to Orlando police.

Police said before midnight Tuesday, Sugey and an unknown male wearing dark clothing kicked opened the door to an apartment on Conway Road, and took the 2-year-old. They were armed with a gun. They said the child's stepmother was home, but the child's father was not.

Officials did not say if there was a child-custody issue, but have issued an arrest warrant for Sugey. They could be traveling in a 2015, silver Lexus Rx350, with the Florida tag, IVTJ11.

Jenzell is described as 3 feet tall, weighs 45 pounds and has brown hair and hazel eyes. He was last seen wearing a diaper.

Sugey is described as 5 feet, 4 inches tall, weighs 120 pounds, and has brown hair and brown eyes.

Police said they have since identified a person of interest as 23-year-old Angelica Melendez. She is described as a Hispanic female with black hair and brown eyes.

If located, officials ask that you do not approach Jenzell or Sugey. Instead, they ask that you call the Orlando Police Department at 321-235-5300 or dial 911.