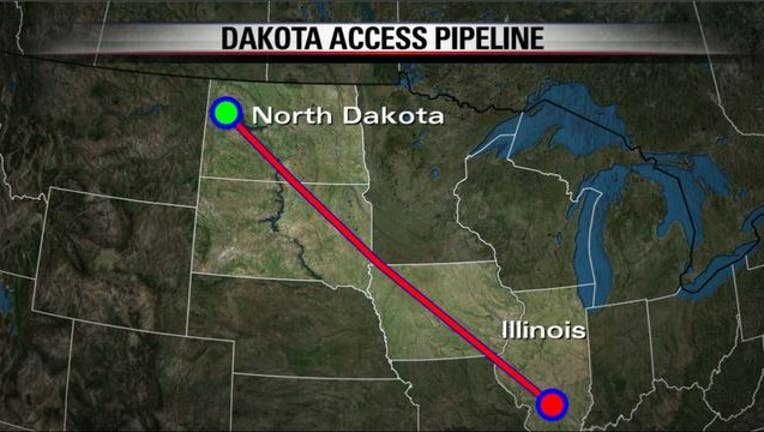 (KMSP) - The U.S. Army has cleared the way for the completion of the Dakota Access Pipeline, telling members of Congress on Tuesday that it will allow the oil pipeline to cross under Lake Oahe.

The Army intends to allow the construction under the reservoir early as Wednesday, according to court documents filed by the Justice Department. The $3.8 billion, 4-state pipeline is more than 90 percent complete.

The Army Corps of Engineers, under the Obama Administration, ordered an additional environmental review in December, after months of protests led by the Standing Rock Sioux Tribe and environmental groups. But on Jan.24, President Donald Trump signed a series of executive orders relating to energy and infrastructure in a push to complete the Dakota Access Pipeline and revive the Keystone XL pipeline.

“That can't be reversed by an executive order,” said Alexandra Klass, Distinguished McKnight University Professor at the University of Minnesota Law School. “What the executive order does is direct the new head or soon to be head of the Army Corps of Engineers to move very quickly to grant all necessary permits and easements.”

The portion of the DAPL under Lake Oahe is the missing piece of the 1,200-mile pipeline that would carry crude from North Dakota through Iowa to Illinois. The site is about a half-mile from the Standing Rock Reservation. The tribe and its allies say the pipeline threatens sacred sites and they fear a leak could contaminate their drinking water.

Standing Rock Sioux attorney Jan Hasselman vowed to file a lawsuit, saying the government "will be held accountable in court."

Last week, 76 pipeline protesters were arrested by law enforcement officials at their encampment in North Dakota. The group, which has been protesting the pipeline’s route through land near the Standing Rock Reservation for months, was told by Morton County sheriff’s deputies that they were trespassing on private property and needed to leave immediately. The protesters were reportedly given a period of time to start dismantling the camp, but refused to leave. Since August, 696 arrests have been made at the camp.