TAMPA, Fla. - The most precious piece of silver in sports is bringing gold to Tampa Bay businesses. As the Stanley Cup Final kicks off with the Lightning playing at Amalie Arena, money is pouring into businesses that have had their toughest year in memory.

Yeoman's Cask and Ale, which is a stone's throw from Amalie Arena, says business will be up by more than 70%.

"It is a lot of fun and a lot of money," said Ashley Miller, who works there as a bartender.

Lightning fans excited to be back in stands

Paying for school out of pocket will be a bit easier this month, as the Yeoman's bartender cashes in on their biggest week since early 2020.

"It is great, we get to buy some new stuff, we got big-screen TVs for the playoffs," said general manager George Equizi.

They're among the many bars and businesses that were deprived of much of the take from last year's Stanley Cup run, given the Lightning played all their games in Canada.

Cigar City bartender Dan DiEva is a Marine veteran and single dad who just paid his way through school and is thrilled to be slinging drinks to those thirsty for a Stanley Cup.

"I rent a house here in Tampa," said DiEva. "It goes to that and to bills."

Cigar City has hosted watch parties for all the home and away games, making tonight's bash number 19 of this run. They're preparing to serve 2,500 people, and have ten on staff tonight. 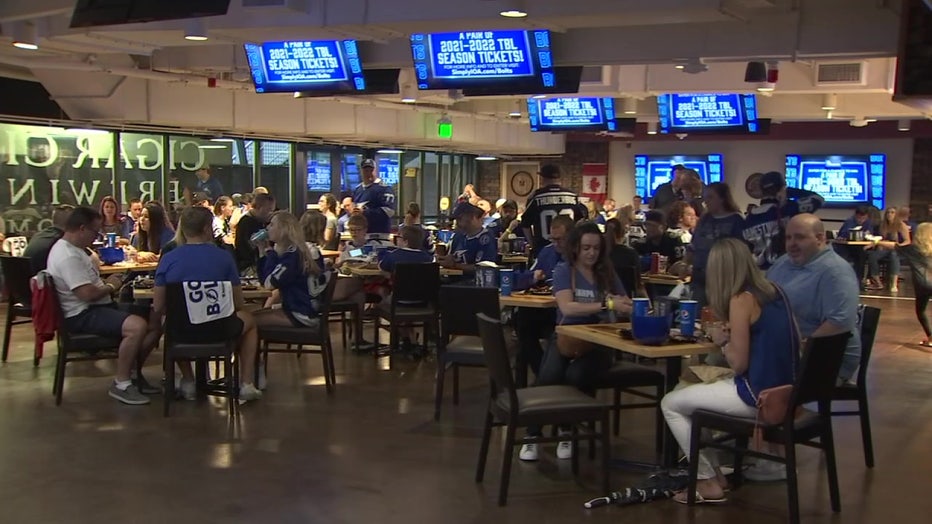 "It is enough to get by," said DiEva.

Part-time workers at Amalie Arena are also basking in the glow.

Just over a thousand are working their tenth home game of this playoff run, with the nights of work they didn't have last year coming into their bank account.

For game one of the Final, Jerry Rodriguez is working to keep Thunder Alley as organized as possible.

"It is great, it is a little bit of extra income and we appreciate it," said Rodriguez. "And also fun."