FOX 13 anchor Mark Wilson interviews his two brothers who are both actors - Paul and Patrick Wilson ahead of the release of ‘The Conjuring 3: The Devil Made Me Do It’ (which opens in theaters June 4) and even the Tampa Bay Lightning get a shout-out.

ST. PETERSBURG, Fla. - The pandemic kept a lot of people out of theaters, and it also delayed a long list of movie releases, including the third installment of "The Conjuring" franchise, which stars Patrick Wilson, brother of FOX 13's Mark Wilson, and a few other familiar faces who hail from the Bay Area.

If you're a fan of movies that keep you gasping, maybe even shielding your eyes, this is it. But what makes "The Conjuring: The Devil Made Me Do It" even more chilling is that it's based on a real story.

"When you're dealing with an actual homicide, you want to pay respects to the family and the victims," said Patrick Wilson, who plays the role of Ed Warren.

The third film in The Conjuring series leaves the haunted house and chronicles the 1981 case of Arne Johnson, the first time in U.S. history that a murder suspect claimed "demonic possession" as a defense.

"The court accepts the existence of God every time a witness swears to tell the truth," the character Ed Warren says in the movie. "I think it's about time they accept the existence of the devil."

Wilson, a St. Petersburg native, and Vera Farmiga once again play real-life paranormal investigators, Ed and Lorraine Warren. The intensity explodes from the first scene as they help to perform an exorcism. The demon leaves the body of a child but ends up inside Arne Johnson, who goes on to kill his landlord.

This film has been touted as the darkest of "The Conjuring" franchise. 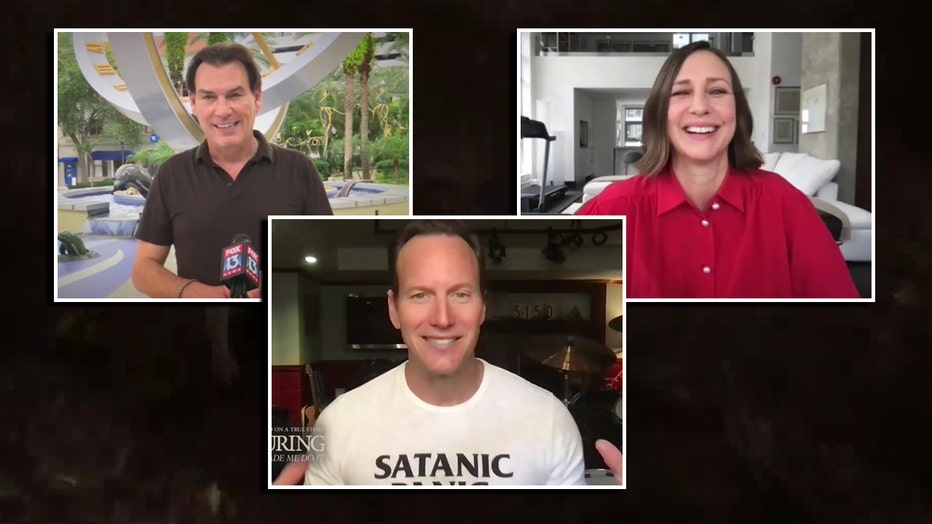 Patrick Wilson is not the only familiar face folks in the Bay Area will recognize. St. Pete's Eugenie Bondurant plays the Occultist while Patrick's brother, Paul Wilson, takes on the role of Carl Glatzel.

"It was awesome," Patrick Wilson said about getting to film with his brother. "He stayed with me at my place in Atlanta when we were shooting it, so, it was just a blast and a real dream come true."

"Paul's got some great moments and Eugenie is really unbelievable. She's fantastic in the film," he said.

It's not all scares and demons. There's even a love story as the Warrens put their careers and faith on the line.

"Relationships don't last because of the good times, right, they last because the hard times were handled with love and care," Farmiga said. "And boy, this couple has seen some hard demonic times."

Following a year that, for many, felt a bit like a real-life horror movie, what makes now the right time to bring it to theaters?

"It's been really stressful for so many people, and you know, I think that it's a very valid question - why watch a horror movie now?" said director Michael Chaves. "Honestly, I think that scary movies, horror movies are always so great in both capturing our fear but also giving us resolution and giving us catharsis."

"The Conjuring: The Devil Made Me Do It" opens June 4 in theaters and on HBO Max.

"There's quite a Tampa Bay presence in this film so if you need any other reason to go, now you've got it," Wilson said.