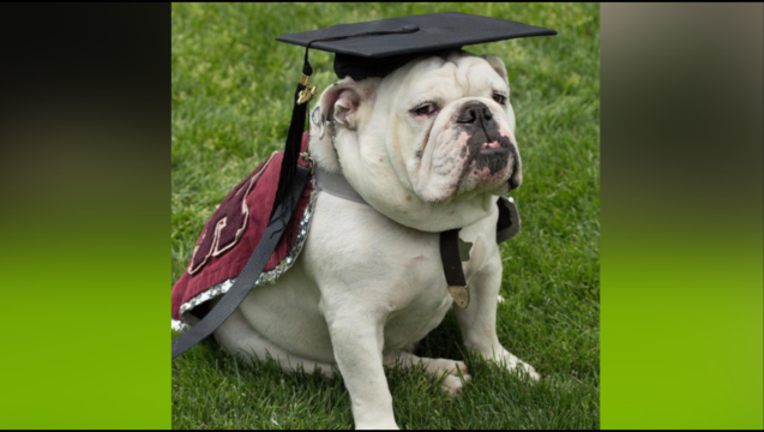 REDLANDS, Calif. (FOX 11) - The beloved bulldog mascot for the University of Redlands received his own graduation ceremony following a cancer diagnosis.

The ceremony for Thurber, who has been the mascot since 2010, was held Monday at the Alumni Greek Theatre on campus with attendants wearing the school's colors of maroon and grey in honor of the dog.

Thurber received a diploma representing his degrees in math and psychology and minors in theater and human-animal studies.

Video posted by Kristina Hernandez shows the pup being wheeled across stage to receive his diploma.

Thurber's handler, Professor Beth Doolittle, shared the news of the dog's cancer diagnosis on Facebook earlier this month, saying a vet confirmed the dog has two aggressive cancerous tumors on his spleen and a mass on his heart. She says after consulting with an oncologist they decided further treatment did not make sense and his comfort and peace of mind were the most important thing.

She also wrote, "I will be with him, monitoring his situation and enjoying the last of our time together at home in Redlands."

A local paper says Thurber will retire following commencement in April of 2018, but the ceremony Monday was held in case his condition worsens before then.