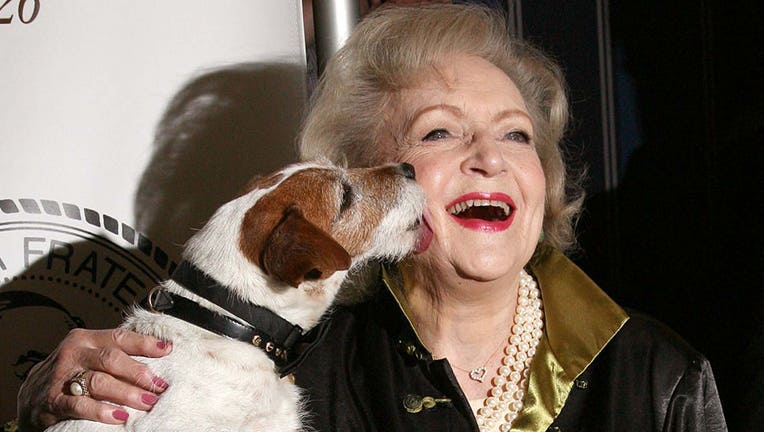 Weeks after her tragic passing, Betty White had one last message to share with her fans around the world on what would have been her 100th birthday.

In the video, White is seen sitting in a chair wearing a bright green patterned blazer and matching blouse thanking her fans for their love and support.

"I just want to thank you all for your love and support over the years. Thank you so much and stick around," White said.

Kiersten Mikelas, White’s assistant, is still operating the late Golden Girl’s Instagram account and shared the video, which was meant to be published on Jan. 17 but was shared on Jan. 21, with fans to show her appreciation for the outpouring of support sent to humane societies across the country through the #BettyWhiteChallenge.

"Good morning! As we continue to see numbers coming in from all over the world — it’s just absolutely amazing how much money all of you raised for the animals through #thebettywhitechallenge," the Instagram post read.

"She could never have imagined such an outpouring of love and would have be so grateful to everyone. When we recorded her special message to fans who attended the movie, we also recorded one that we had planned to put on social media on her birthday. She was using the occasion of her 100th birthday to celebrate YOU - her fans. She knew how lucky she was; she felt the love, and she never took it for granted. I think it’s appropriate to post today as a thank from Betty and the animals," the post concluded.

The #BettyWhiteChallenge asked fans to pick a human society, local rescue or animal shelter in White’s memory and donate $5 in her name on Jan. 17 - her birthday.

The "Golden Girls" star wrote in her 2012 book, "Betty & Friends: My Life at the Zoo," that she fell in love with animals at a young age after tagging along with her parents to zoos.

"I am a confirmed zoophile, and I particularly appreciate the positive changes that have taken place in the whole zoo community over the past few decades, and the critical role they play today in perpetuating endangered species," White wrote.

White started working with the Society for the Prevention of Cruelty to Animals Los Angeles as early as the 1940s, when she was in her 20s and continued to be an animal rights advocate until her death. White was involved with the Morris Animal Foundation for 50 years, serving in various roles as a trustee, board president, and spokesperson.

Since the start of the challenge, animal shelters such as the Best Friends Animal Society and the ASPCA have raised hundreds and thousands of dollars.

"Reflecting Betty White’s lifelong commitment to helping vulnerable animals, the #BettyWhiteChallenge is making an enormous difference for shelters and rescue groups serving their communities while navigating ongoing challenges posed by the COVID-19 pandemic. We are working with Uber to distribute $50,000 in critical grant funding to local animal welfare organizations and encourage people to support their community shelters and rescues through donations, fostering, and adoption. These acts of compassion not only honor Betty’s legacy but extend it to help even more vulnerable dogs and cats find safe and loving homes," according to an ASPCA statement.

The Best Friends Animal Society raised $340,000 since the start of the challenge, according to a spokesperson.

"Overall we have seen an amazing outpouring of support from Betty White’s fans – they are truly honoring her legacy. Since Betty’s passing on Dec. 31, we currently have received, in total, more than $230,000 in donations from almost 6,000 new donors. We still have gifts coming in as many wanted to mail in their gifts, so that number is growing," the spokesperson added.

Additionally, country singer Trisha Yearwood and others felt it was an appropriate way to honor White following her death.

The singer, author and wife of Garth Brooks hosted a fundraiser on TalkShopLive on Jan. 17.

When the roughly 18-minute live broadcast was said and done, Yearwood revealed on Twitter that about $30,000 was raised for the pet rescue organization Dottie’s Yard.

FOX News and Stephanie Weaver contributed to this report.