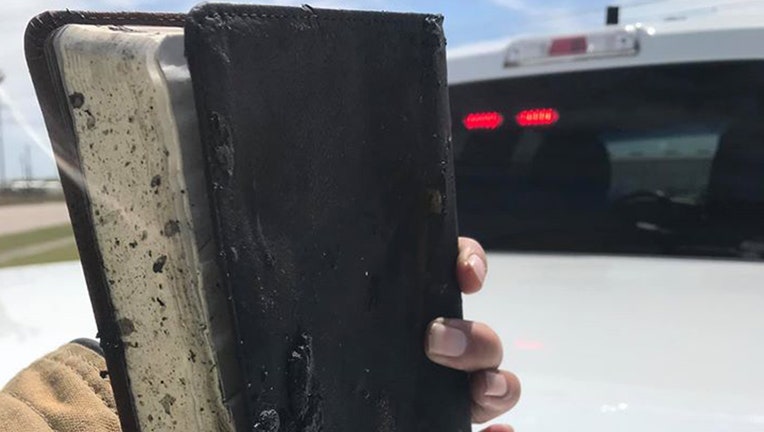 DEER PARK, Texas - A Texas woman’s truck was engulfed in flames Sunday in Deer Park, but she credits some divine intervention – and a little help from the Deer Park Fire Department – for minimizing the damage preventing any injuries to herself and saving her Bible, a report said Monday.

Trina Carr said she was driving her truck when God told her to pull over because something was wrong, ABC 13 reported. As she pulled over, she noticed the truck began to smoke and quickly exited the vehicle.

PAUL BATURA: IF GOD OFFERED, WHAT WOULD YOU ASK HIM TO DO FOR YOU?

The fire was quickly extinguished with aid from the Deer Park Fire Department, the Houston Chronicle reported.

Once the fire was put out, a search of the truck revealed that the fire melted the dashboard, the engine compartment and passenger compartment. But the Bible and a notebook belonging to Carr were saved. The Bible’s back cover sustained some damage and a little water on the pages, a Facebook post by the fire department reported.

”Many thanks to my brothers In DPFD for extinguishing my truck. They arrived quickly and had it out in no time. Thanks be to God my wife was able to pull over and get out in time," Trina Carr’s husband, Mike, said in a separate Facebook post. CLICK HERE TO GET THE FOX NEWS APP

“That is amazing that the Bible in the truck didn't burn at all. God Bless," his post said.