President Joe Biden urged Americans to not "slow down now" as he spoke in Pittsburgh, Pennsylvania to tout his $1 trillion infrastructure law.

PITTSBURGH - President Joe Biden on Friday visited Pennsylvania in an effort to "go out and talk to the public" about his White House achievements so far, including the passage of a bipartisan infrastructure package intended to help the nation’s crumbling roads and bridges, as part of a broader campaign ahead of the 2022 midterm elections.

Biden traveled to Pittsburgh to specifically promote the benefits of the new $1 trillion infrastructure law that includes bridge maintenance. He visited the site of an early-morning bridge collapse, which left 10 people with "minor" injuries and underscored his frequent calls to do more for the country’s crumbling infrastructure.

The president spoke to first responders and surveyed the empty space the bridge spanned before falling to pieces.

"Our team remains in touch with state and local officials on the ground on updates and any additional assistance we can provide," she said.

Pittsburgh's mayor and fire chief were among those who spoke to reporters on Jan. 28, 2022, to provide an update on a bridge collapse near the city's Frick Park.

The bridge collapse — which caused no fatalities but prompted rescuers to form a human chain to retrieve people from a precariously perched bus — offered Biden a striking example of what he has declared an urgent need for investments in the country's infrastructure.

The steel span was built in 1970, and a 2019 inspection revealed the deck and superstructure to be in poor condition, according to the U.S. Department of Transportation’s National Bridge Inventory.

The infrastructure law signed by Biden has earmarked about $1.6 billion for Pennsylvania bridge maintenance, with tens of billions more for public transit, highway maintenance and broadband internet expansion in the state.

Speaking later at a manufacturing research and development center, Biden promised that money from the infrastructure law would help rebuild the collapsed Pittsburgh bridge and "thousands of other bridges across the country," but he also expressed urgency to get the funding distributed.

"We’ve got to move," he said. "We don’t need headlines that say someone was killed when the next bridge collapses."

During his remarks, Biden touted strong job growth, particularly in manufacturing, during his first year in office, and spoke further about how his infrastructure law invests in replacing lead pipes, repairing bridges and expanding broadband access, which he said would create jobs for Americans "so nobody's left behind."

Biden also announced during his speech that Union Pacific, one of the nation’s largest railroads, will make the largest-ever purchase of battery-powered locomotives when it adds 20 of them to its fleet.

The president, a Pennsylvania native, is visiting one of the key battlegrounds in this year’s midterm congressional elections and the trip was intended to help promote White House achievements. The battle to replace Republican Sen. Pat Toomey, who is not seeking reelection, is expected to be one of the most competitive Senate races.

In addition, the president’s poll numbers have been sinking in recent weeks in the midst of an unrelenting pandemic and high inflation. Biden aims to highlight to the public what he’s accomplished so far as commander-in-chief and why Congress needs to get behind the rest of his domestic agenda. 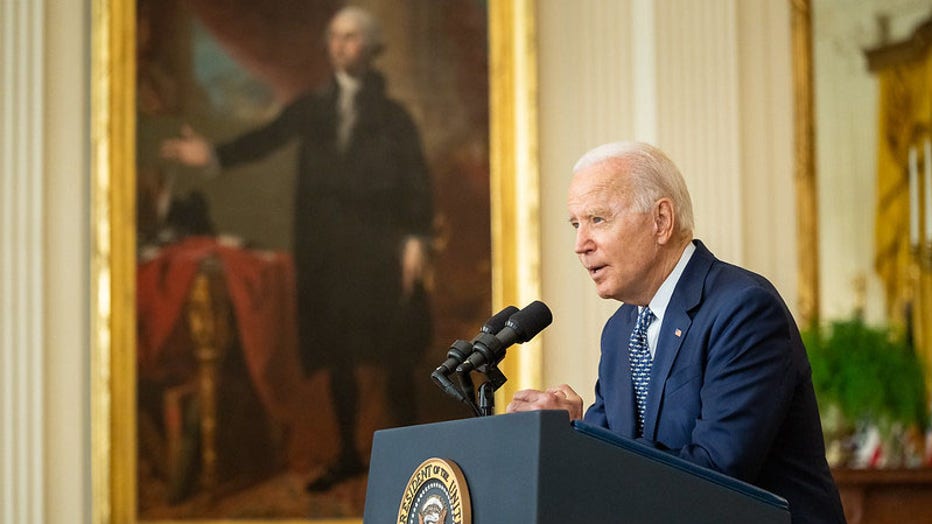 After long negotiations, a bipartisan version of his infrastructure plan was finally signed into law in November with more than a dozen Republican votes in the Senate. Aubrey Jewett, a professor of political science at the University of Central Florida, last week noted it as "one of his bigger legislative accomplishments."

But Biden’s sweeping "Build Back Better" program of social and environmental spending has not had the same success. The plan includes a wish list of Democratic priorities, such as an extended child care tax credit, climate legislation, paid family leave and universal prekindergarten. Republicans have not been won over on this, and it has even turned into a months-long disagreement between more progressive and moderate Democrats on what should be included in the measure, including a holdout by West Virginia Sen. Joe Manchin.

Meanwhile, two of the three leading Democrats on Pennsylvania's statewide ballot this spring who were invited to appear with Biden on Friday will not attend, their campaigns confirmed on the eve of the president's visit.

Lt. Gov. John Fetterman, a leading Senate candidate, and state Attorney General Josh Shapiro, the likely Democratic nominee in the race for governor, will be absent because of scheduling conflicts, according to their spokespeople.

Another top Senate candidate, Rep. Conor Lamb, a longtime Biden supporter based in Pittsburgh, will attend, his office confirmed. All three had been invited to participate in a photo line with the president.

Fetterman and Shapiro indicated that politics had no bearing on their schedule, but their decisions to avoid Biden in his home state could fuel further questions among anxious Democratic candidates elsewhere as they decide whether to embrace the president with a falling approval rating.

Leading Pennsylvania Democrats who are not on the ballot this year did not have the same scheduling conflicts. Those who will appear with Biden on Friday include Gov. Tom Wolf, who is term-limited, and Sen. Bob Casey, whose current term runs through 2024.

While in Pittsburgh, White House press secretary Jen Psaki said previously that Biden also plans to focus on the economy in his remarks.

"He'll be talking about how far we’ve come in getting our economy moving again, making more right here in America, and ensuring all workers benefit," Psaki told reporters on Thursday at the White House. "He’ll highlight the 367,000 manufacturing jobs that our economy has created since he took office, and he’ll underscore the vital role the federal government can play in bringing workers and businesses together."