CAPE CANAVERAL, Fla. - Boeing's capsule for astronauts underwent its first major flight test Monday, shooting a mile into the air then parachuting back to the New Mexico desert.

The Starliner capsule carried no crew, just a test dummy for the 1 1/2-minute shakedown of the launch abort system. Only two of the three main parachutes opened, but both NASA and Boeing said astronauts would have been safe if aboard.

The abort system is designed to provide a fast getaway for a crew, if there's an emergency on the Florida pad or in flight.

For its next test, Boeing plans to launch a Starliner to the International Space Station next month, without a crew.

All three astronauts assigned to the first crew flight -- targeted for next year -- were present for Monday's test.

"We hope we never need to use this system," said NASA astronaut Mike Fincke. "But in case we ever have any trouble aboard the beautiful Atlas V on the launch pad, we know after today's test that we'll be able to get off safely."

SpaceX -- NASA's other commercial crew partner -- successfully launched a Dragon capsule to the space station in March. That capsule carried a test dummy and supplies; SpaceX aims to put astronauts on board sometime early next year. Boeing also is shooting for an early 2020 launch of astronauts to the space station.

Whether SpaceX or Boeing, it will be the first time Americans launch into orbit from the U.S. since NASA's last space shuttle flight in 2011. U.S. astronauts have been hitching rides on Russian rockets, costing NASA tens of millions of dollars per seat.

During Monday's test at the Army's White Sands Missile Range, Boeing counted down to zero, then the Starliner's four launch abort engines fired. The capsule, launched from a test stand, accelerated about 650 mph (1,000 kph) in five seconds flat.

The capsule soared nearly a mile (1,300 meters) into the air and a mile downrange, before the parachutes and then air bags inflated seconds before touchdown. Only two of the three big red, white and blue parachutes deployed, but both NASA and Boeing said that was acceptable for test purposes. The issue should not delay the next test flight, company officials noted. 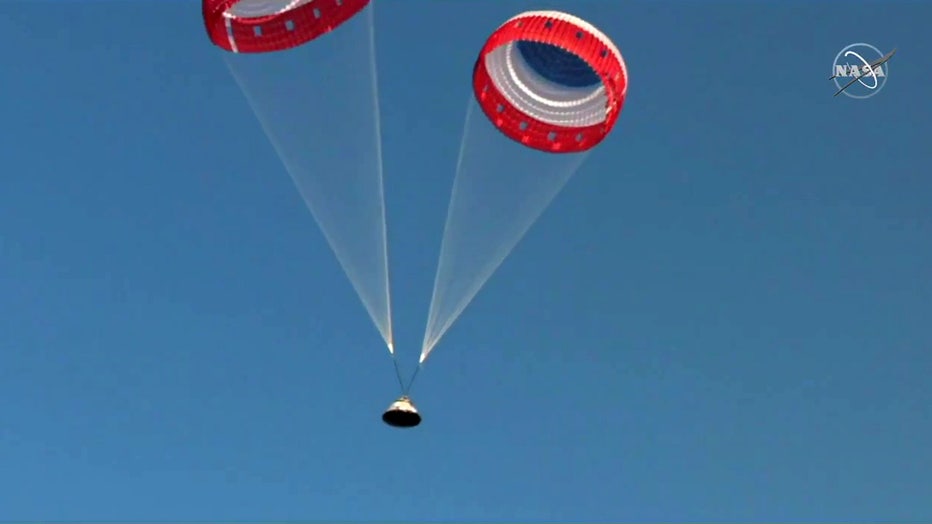 "We are thrilled with the preliminary results, and now we have the job of really digging into the data and analyzing whether everything worked as we expected," NASA's commercial crew manager, Kathy Lueders, said in a statement.

Next up is the orbital test flight.

NASA and Boeing are targeting Dec. 17 for the Starliner's launch aboard United Launch Alliance's Atlas V rocket from Cape Canaveral. The plan is for the capsule to remain at the space station close to a week before heading for a touchdown in the western U.S.

Boeing is using a ground landing. The Starliner will be the first U.S. crew capsule to return from orbit to solid ground. SpaceX's crew capsule splashes down in the Atlantic, like NASA's old Mercury, Gemini and Apollo capsules.

If the upcoming orbital test goes well, Boeing will follow with the crew test flight.

"It's starting to feel really close," said NASA astronaut Nicole Mann, who will be on that first crew.

Private companies -- SpaceX included -- have been shipping cargo to the space station since 2012. Northrop Grumman's Cygnus capsule arrived at the orbiting lab on Monday with a fresh delivery, the company's 12th.