The Trump administration sued former national security adviser John Bolton on June 16 in an attempt to delay the publication of Bolton's long-awaited book.

WASHINGTON (AP) - President Donald Trump “pleaded” with China’s Xi Jinping during a 2019 summit to help his reelection prospects, according to a scathing new book by former Trump adviser John Bolton that accuses the president of being driven by political calculations when making national security decisions.

The White House was working furiously to block release of the book, asking a federal court for an emergency temporary restrainer Wednesday to prevent the spread of allegations, like those about China, that carry echoes of Trump’s efforts to solicit political help from Ukraine. Those efforts led to his impeachment.

The 577-page book paints an unvarnished portrait of Trump and his administration, lending the most vivid, first-person account yet of how Trump conducts himself in office. Several other former officials have written books, but most have been flattering about the president. Other former officials have indicated they were saving their accounts of their time working for Trump until after he left office in order to speak more candidly. The Associated Press obtained a copy of Bolton’s book in advance of its release next week.

Bolton, Trump's national security adviser for a 17-month period, called Trump's attempt to shift the June 2019 conversation with Xi to the U.S. election a stunning move, and wrote that it was among innumerable conversations that he found concerning. Bolton wrote that he believes that Congress should have expanded the scope of its impeachment inquiry to these other incidents.

“I am hard-pressed to identify any significant Trump decision during my tenure that wasn’t driven by re-election calculations,” Bolton wrote.

Deeply critical of the president and much of his senior team, Bolton wrote that because staff had served him so poorly, Trump “saw conspiracies behind rocks, and remained stunningly uninformed on how to run the White House, let alone the huge federal government.” He added that while he was at the White House, Trump typically had only two intelligence briefings a week “and in most of those, he spoke at greater length than the briefers, often on matters completely unrelated to the subjects at hand.”

As for the meeting with the Chinese president in Osaka, Japan, Bolton wrote that Trump told Xi that Democrats were hostile to China.

“He then, stunningly, turned the conversation to the coming U.S. presidential election, alluding to China’s economic capability to affect the ongoing campaigns, pleading with Xi to ensure he’d win,” Bolton said. “He stressed the importance of farmers, and increased Chinese purchases of soybeans and wheat in the electoral outcome.”

Bolton wrote that he would print Trump’s exact words, “but the government’s pre-publication review process has decided otherwise."

The book, titled “The Room Where It Happened: A White House Memoir,” which is set to be released next Tuesday by Simon & Schuster, has been the subject of a lengthy battle between Bolton and the White House.

The Department of Justice filed suit Tuesday in an effort to delay publication of the book, claiming it still contained highly classified information and a required review by the National Security Council had not been concluded. According to the filing, a career official determined no classified material remained in April, but that national security adviser Robert O’Brien initiated a secondary review that deemed additional information to be classified.

The White House’s contention that so much of the book was classified appeared to be a tacit admission that many of Bolton’s allegations were accurate — as inaccurate information could not be classified.

Bolton wrote that, due to the review process, he made “numerous changes to the manuscript in order to obtain clearance to publish, the vast bulk of which, in my view, did not change the facts set forth.” He said in some cases he was asked to add phrases like, “in my view,” to make it clear he was expressing his opinion instead of relying on sensitive information. In others, he was asked to describe things more generally. He was asked to remove quotation marks nearly every time he recounts conversation between Trump and foreign leaders and himself and foreign leaders.

The book begins with a quotation from the Duke of Wellington as he rallied his troops at Waterloo in 1815: “Hard pounding, this, gentlemen. Let’s see who will pound the longest.”

U.S. Trade Representative Robert Lighthizer said Wednesday that he attended a meeting between Trump and Xi at the Group of 20 nations in Osaka, but he never heard Trump pleading with Xi to buy more agriculture products to ensure he would win reelection. Lighthizer spoke at a Senate hearing on trade issues and was asked about Bolton’s recollection of events. 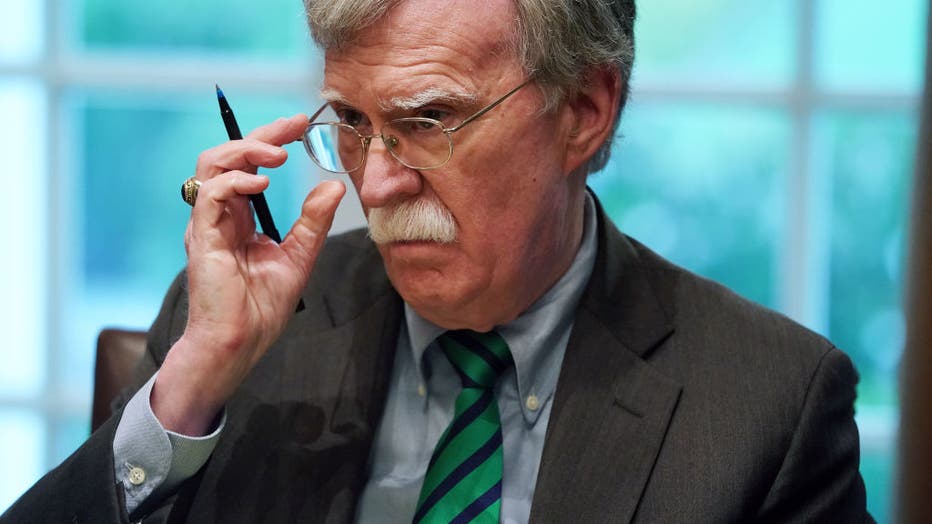 Trump continually pandered to Xi, Bolton wrote. At a White House Christmas dinner in 2018, Bolton said Trump asked why the U.S. was sanctioning China over it treatment of Uighurs. China suspects Uighurs, who are predominantly Muslim and culturally and ethnically distinct from the majority Han Chinese population, of harboring separatist tendencies. In recent years, China has dramatically escalated its campaign against them by detaining more than 1 million people in internment camps and prisons, which it calls vocational training centers.

“At the opening dinner of the Osaka G-20 meeting, with only interpreters present, Xi explained to Trump why he was basically building concentration camps in Xinjiang,” Bolton wrote. “According to our interpreter, Trump said that Xi should go ahead with building the camps, which he thought was exactly the right thing to do. "

Bolton’s claim that Trump was appealing to China to assist his reelection effort comes as the president’s rhetoric toward the U.S. geopolitical rival has grown more acerbic in response to the coronavirus pandemic. But it may undercut the Trump reelection campaign’s efforts, evidenced in recent television ads and public statements. to paint presumptive Democratic nominee Joe Biden as soft on China.

In the book, Bolton describes every Trump decision as being guided by concerns for his own reelection, a claim that evokes the scandal that sparked Trump’s impeachment last year.

Trump’s decision to withhold military assistance to Ukraine until it agreed to investigate Biden led the House to charge Trump was abusing his power. The aid was ultimately released once the hold-up became public. The GOP-controlled Senate ultimately acquitted the president on that count and a count of obstructing Congress’ investigation of the incident.

Bolton was called to testify before House lawmakers conducting the impeachment inquiry, but he declined, suggesting he wanted a federal court to decide whether he should heed a White House directive not to cooperate with the inquiry.

Bolton didn't spare Trump criticism for his handling of the coronavirus pandemic, even though he'd left the White House months before it began. Bolton wrote that “Trump’s reflex effort to talk his way out of anything, however, even a public-health crisis, only undercut his and the nation’s credibility, with his statements looking more like political damage control than responsible public-health advice.”

The White House did not immediately respond to a request for comment on the specifics in Bolton's book, but emailed reporters past quotes of Democratic lawmakers impugning the former Trump aide's credibility. In advance of the public reports about the details, White House press secretary Kayleigh McEnany said the book was “full of classified information, which is inexcusable.”