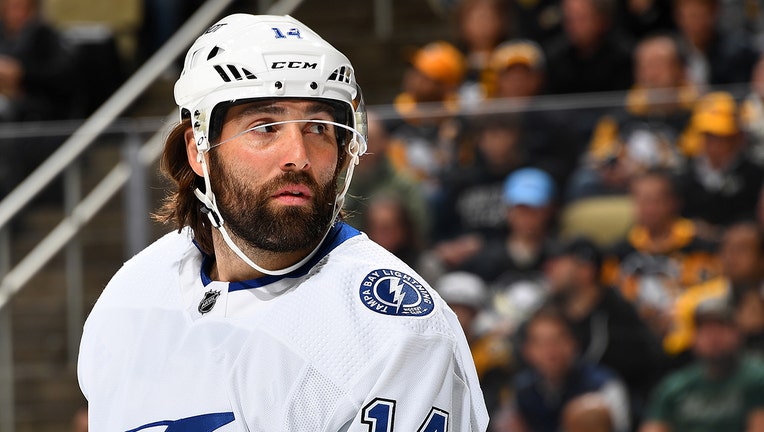 PITTSBURGH, PA - OCTOBER 15: Pat Maroon #14 of the Tampa Bay Lightning skates against the Pittsburgh Penguins during the game at PPG PAINTS Arena on October 15, 2022 in Pittsburgh, Pennsylvania. (Photo by Joe Sargent/NHLI via Getty Images)

TAMPA, Fla. - The Tampa Bay Lightning were on the road in Boston, where they lost the game, but fans are talking about the play-by-play by Jack Edwards.

The Boston Bruins broadcaster talked about Pat Maroon's weight during the first period of the game.

"Listed at 238 pounds," Edwards said of Maroon's weight. "That was day one of training camp. I got a feeling he's had a few more pizzas between then and now."

That wasn't the only statement. Edwards continued joking about Maroon's size.

"Inadvertent fasting for Pat Maroon is, like, four hours without a meal," Edwards said. "Hey, three Cups in a row, who can argue with his formula?"

The Tampa Bay Lightning's Pat Maroon made a special fan's first game even more memorable. Bradley Wombles, 4, has cystic fibrosis, and is thanking Maroon for gifting him with a special hockey stick -- signed by him.

In the tweet, he said he made the donation in the name of Edwards and encouraged his followers to also donate.

A few hours later, they sent another tweet, thanking fans for their generosity and they will be matching donations made by Lightning players.

Tampa Bay Thrives is a non-profit that helps people struggling with mental health and other issues. You can learn more about the organization here: www.tampabaythrives.org.

As of Thursday morning, Edwards has yet to respond.

Maroon has played more than 650 NHL games, scored 112 goals, and has 166 assists. He has won three Stanley Cups – in a row – with the St. Louis Blues and the Lightning.