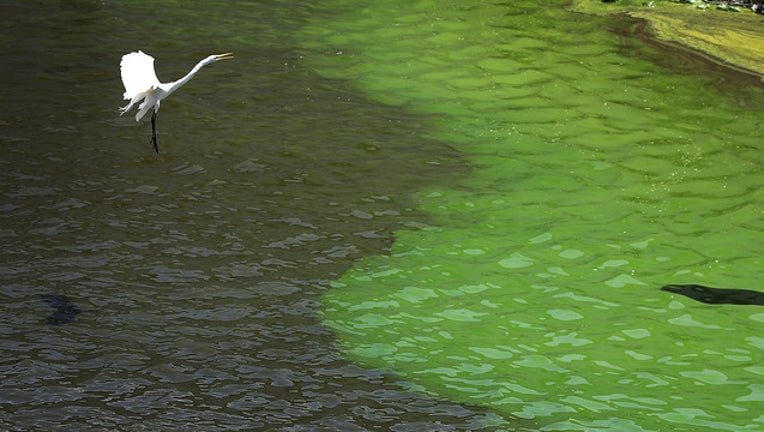 A crane flies over the green algae blooms that are seen at the Port Mayaca Lock and Dam on Lake Okeechobee on July 10, 2018 in Port Mayaca, Florida. (Photo by Joe Raedle/Getty Images)

TALLAHASSEE (NSF) - As they address environmental issues on the campaign trail, Florida’s gubernatorial candidates are all for doing what is necessary to eliminate toxic algae outbreaks and for preserving natural springs and rivers.

But the candidates’ solutions are mostly general and vary on how to keep up with the state’s growing population and businesses while keeping springs and rivers clean from the Panhandle to the Everglades.

Democratic candidates, blaming the sugar industry around Lake Okeechobee as a key source of nutrient pollution in waterways in Southeast and Southwest Florida, vow to reverse water rules imposed under years of Republican leadership. At the same time, they point to a number of other environmental priorities.

Putnam, who is finishing his second term as state agriculture commissioner, pointed to 2016 legislation he worked on as a “beginning, not the end, to addressing Florida’s projected one-billion-gallon-a-day water shortfall forecast for 2030.”

The bill also called for further establishing management plans for farming around Lake Okeechobee and other waterways in the region.

The campaign of Putnam’s rival in the Aug. 28 Republican gubernatorial primary, Congressman Ron DeSantis, did not respond to questions from The News Service of Florida. But in campaign appearances, DeSantis has repeatedly made the sugar industry a key separation point between him and Putnam.

"I don’t care what special interests say, I am not going to do their bidding," DeSantis told reporters at the Republican Party of Florida’s “Sunshine Summit” in June. "I’m going to stand with the fishermen and the boaters and the property owners that populate those great parts of our state.”

The gubernatorial campaign is playing out amid high-profile problems with toxic algae in waterways in Southeast and Southwest Florida. The problems stem from polluted discharges from Lake Okeechobee.

The News Service asked the candidates about what they would request from the Legislature and other actions they would undertake to ensure the drinking-water demands of the state continue to be met.

Putnam praised Gov. Rick Scott for getting federal money to help speed repairs to the Herbert Hoover Dike around Lake Okeechobee and pointed to a need to continue pressing the U.S. Army Corps of Engineers to re-evaluate the discharge process.

“This is why as governor, I will work to protect our state’s water resources by investing in the infrastructure required to provide our state with quantity and quality of water needed to support our state,” Putnam said.

Putnam also talked of the need for a comprehensive effort to address water quality and quantity issues, including in Northwest Florida’s Apalachicola River, natural springs, beaches and the Everglades.

“Our state’s growing population is placing ever increasing demands on our roadways, bridges and digital infrastructure,” Putnam said. “And while we have internalized the cost of these major infrastructure projects that propel our state’s transportation networks, we must continue to recognize the value and make investments in our state’s water and natural resources infrastructure. Water is our golden goose, if we don’t take care of the golden goose we aren’t going to have tourism, growth or agriculture.”

Graham said that in 2016, she proposed a plan to combat the algae problems by addressing failing septic tanks, bolstering water-management districts, improving water-quality standards and purchasing land south of Lake Okeechobee to restore the Everglades.

“In addition to doing common-sense things, like protecting our water quality standards, we must also protect our aquifer from saltwater intrusion caused by climate change,” Graham said. “This challenge is here today and already affecting the aquifer. To secure our drinking water, we must take immediate steps to stop the intrusion and plan for generations to come as climate change accelerates.”

King talked of the need to work with local water utilities and suppliers of fresh drinking water and ensure water management boards are staffed with scientists and experts.

“As climate change increases the demands on Florida’s water system, we will need to make sure that our infrastructure is prepared to effectively handle the next hurricane or major storm that hits our state,” King said.

King was also the most adamant about the impact of the sugar industry on South Florida waters.

“The next governor of Florida will need the courage to take on the industry holding a vise grip on both political parties for decades: sugar,” King said. “I do not believe we can have an effective policy on the Everglades or any other environmental issue until we have candidates who are not beholden to sugar and similar special interests.”

Greene said the state needs to keep acquiring land south of Lake Okeechobee so water can flow south and needs to address sources of phosphorus and nitrogen in the water. The sources include agriculture, excessive lawn fertilizer and septic tank leakage.

“I’ll also look into alternative water supplies, including surface water and desalination --- which isn’t necessarily cost-effective right now, but it could be an incredible solution for our state in the future,” Greene said.

Greene added that the state needs to keep watching how companies such as water bottler Nestle Water use the state’s resources “and not taking more water than Florida’s system can bear.”

Gillum intends to push lawmakers to beef up the Department of Environmental Protection, with stronger protections against toxic dumping and a ban on fracking.

“If the Legislature fails to cooperate on these common-sense policies that protect Florida's environment, farmers, small businesses and economy, I'll pass as much of it as possible through executive order,” Gillum said.

He also called for “smarter growth” around Lake Okeechobee and the Everglades.

“Instead of allowing developers to build nearly at will, we need to more fully assess the impacts of these projects,” Gillum said.

Levine also said he would make a fracking ban a legislative priority.

“It’s a reckless and dangerous practice that puts our aquifer at risk,” Levine said.

Levine also believes a reservoir that lawmakers approved in 2017 needs to be bigger to direct more water south from Lake Okeechobee through the Everglades.

“My administration will ensure that our water management districts are led by scientists, not industry insiders, so that experts are setting the standards for our water quality,” Levine said. “As governor, we will hold polluters accountable and empower the Department of Environmental Protection to fulfill its intended purpose.”