TAMPA, Fla. - Tampa Mayor Jane Castor held a virtual press conference Wednesday with Kansas City Mayor Quinton Lucas as her special guest. During the live Facebook stream, she said there will be an outdoor mask mandate for areas expected to have a large concentration of people.

Castor did not get into details and a spokesperson for the city says more information will be released on Thursday.

"We have to make sure that everybody is wearing their mask. We can only do so much," Castor explained. "You have to understand your level of personal responsibility and just go home knowing that you had a great time in Tampa Bay but not taking a virus with you."

Lucas echoed the importance of mask-wearing; saying people from Kansas City who are heading to Tampa are very used to mask mandates. 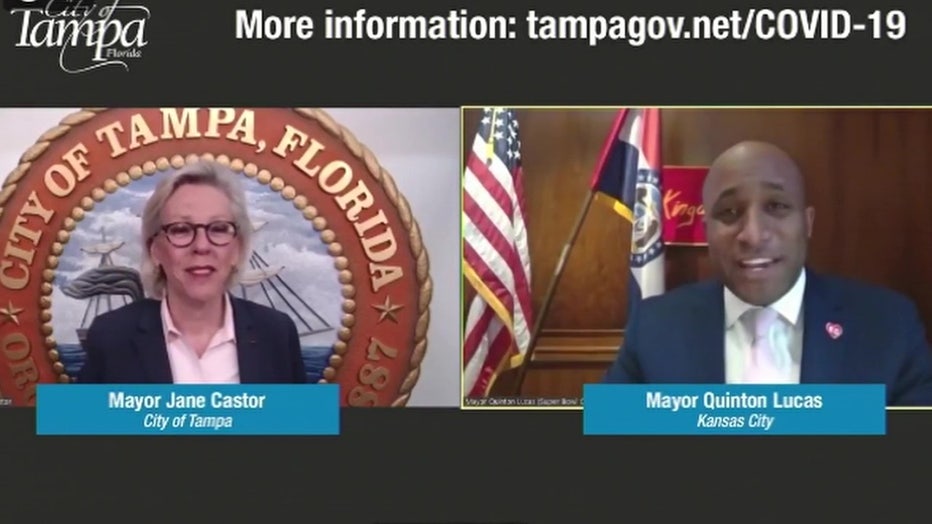 "We've had mask mandates for some time and I have seen it and I think, Mayor, you have seen it the same way. It really allows us to re-open responsibly. It allows us to go to stores with a level of comfort. It allows us to do a lot more things and that's why I am certain 'Kansas Cityans' who make it down to the Super Bowl will come with good behavior, follow those rules with social distancing," Lucas said.

FOX 13 was expecting the two mayors to make a bet about with the outcome of the Super Bowl will be, but that is still to be determined.