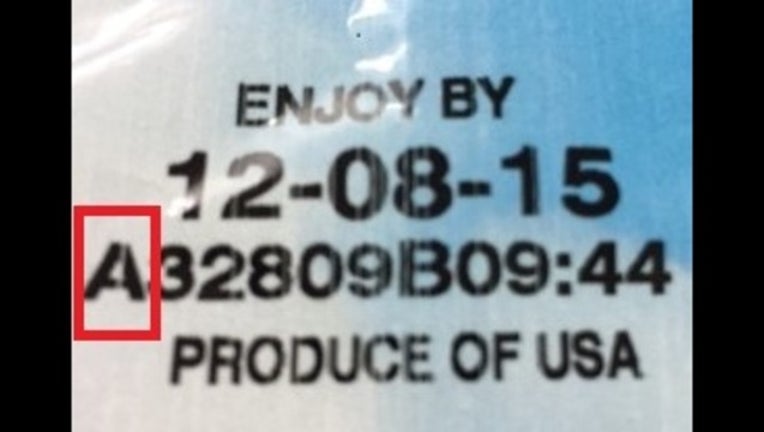 The Centers for Disease Control and Prevention says one person from Michigan has died and about a dozen others were sickened from a listeria outbreak linked to Dole salads.

The CDC said the packaged salads made by Dole are the likely source of the outbreak. The salads are sold under several brands, including Dole, Fresh Selections, Simple Truth, Marketside, The Little Salad Bar and President's Choice. The manufacturing code on the package starts with the letter "A." The CDC says customers should not eat those bags.

The salads were made in Springfield, Ohio, the CDC said. Those infected were spread in six states: Indiana, Massachusetts, Michigan, New Jersey, New York and Pennsylvania.

Dole stopped all production at the Ohio facility on Thursday, the CDC said.

What you should look for

Packages that can be identified with the letter A at the beginning:

If  you have the packages in your home, do the following: throw it away in a sealed plastic bag, wash the refrigerator drawer, wash any items used to serve the salad, wash your hands with warm water and soap.

Fever, muscle ache, diarrhea or gastrointestinal symptoms. Almost everyone who has listeria has infections in their blood, which causes bloodstream infections or infections to the central nervous system, which causes meningitis.

Listeria symptoms typically start within several days after eating the contaminated food. If you have already eaten the salad and show no symptoms, experts say tests are not needed. People can sometimes developing listeria up to two months after eating the food.

Adults over 65 or with weakened immune systems and pregnant women are most at risk. If you fall under one of these categories and are experiencing any of the above symptoms, see a doctor immediately.

Listeria is treatable and can be remedied with antibiotics.

CLICK HERE for more information on the outbreak from the CDC.