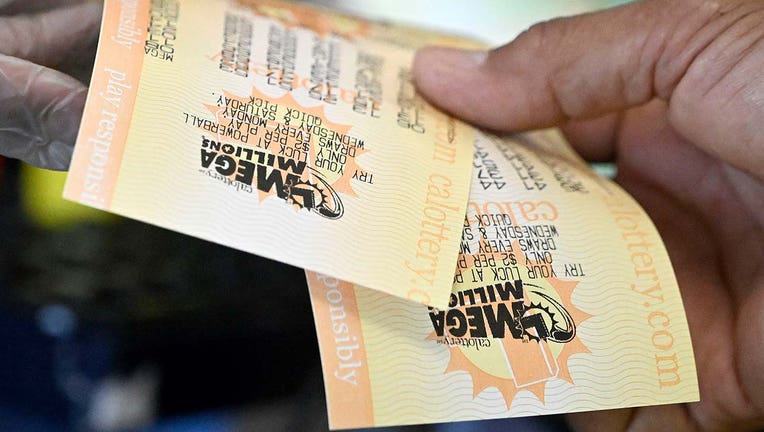 DANIA BEACH, Fla. - After no one in America won the Mega Millions jackpot of $830 million this week, Floridians learned one person in the Sunshine State scored after purchasing a $1 million ticket. It turns out that lucky person bought it in South Florida.

The winning ticket was purchased at Stirling Petroleum Inc. at 3991 Stirling Road in Dania Beach. It's a Mobil gas station located near the Seminole Hard Rock Hotel & Casino Hollywood. The winner of the second-place prize matched the first five numbers, but not the Mega Ball: 15.

Florida Lottery told FOX 13 that the winner has not come forward yet to claim their prize.

As for Friday night's drawing, the Mega Millions jackpot is now $1.025 billion. The new jackpot is the fourth-largest U.S. lottery jackpot in history.

The $1.02 billion is the value of the annuity option paid annually over 30 years. However, nearly every person who wins the prize selects the cash option, worth an estimated $602.5 million.

The odds of winning the Mega Million jackpot are 1 in 302.5 million.

According to Mega Millions, Friday’s prize is just shy of the $1.050 billion jackpot won in Michigan on January 22, 2021. The record jackpot is $1.537 billion, won in South Carolina on October 23, 2018. That prize remains the world’s largest lottery prize ever won on a single ticket.

Watch out for scams

Lottery players need to look out for scams whether they’ve won or not.

"No representative of Mega Millions would ever call, text or e-mail anyone about winning a prize," the multi-jurisdictional lottery board’s website says.

Lottery scammers are "persistent," use real or made-up company names, and offer a "free play" or "prize" to try to look legitimate, warns Mega Millions.

Scammers can also ask for personal information or payments that they claim are for "taxes" or "fees."

The lottery board also warns that people should be suspicious if a contact asks to keep correspondence confidential or asks for banking information.

"No real lottery tells winners to put up their own money in order to collect a prize they have already won," Mega Millions notes.

Lottery winners should put together a team of financial experts if they’ve won a large prize, Mega Millions says

The lottery board recommends that winners look into resources, financial planning tools and personal specialists from the American Institute of Certified Public Accountants, a national professional organization that has more than 428,000 CPAs affiliated with it.

Lawyers and financial advisers could also be worth considering, according to State Farm Insurance.

Seek help if gambling is a problem

Two organizations the lottery board recommends are the National Council on Problem Gambling and Gamblers Anonymous.

The National Council on Problem Gambling has affiliate locations in 34 states, while Gamblers Anonymous has hotlines in each state along with in-person and virtual meetings.

Lottery winners should make "several copies" of their winning ticket, according to State Farm.

These copies can be shown to lawyers or accountants while the original ticket remains stored in a personal safe or bank deposit box.

State Farm also warns that lottery winners should read each game’s rules and contract before signing their winning ticket.

"In some cases, signing your ticket might prevent you from creating a blind trust later," notes the insurance company’s "What to do if you win the lottery" article.

State Farm says lottery winners should keep their winning private before they turn in a ticket.

Winners should also be prepared to change their contact information. This is because many lotteries share names or require interviews or press conference participation for transparency reasons.

"Be sure to change your phone number and set up a new P.O. box beforehand to avoid being inundated with requests," State Farm writes.

The insurance company notes that some winners might be able to form a blind trust through their attorney, so that winnings can be anonymously received.

Make a plan for the money

While forming a team of financial experts is an important step for most lottery winners, State Farm says winners should make a general list or plan about what they wish to do with their money.

"Write down your personal, financial, lifestyle, family and charity goals, and return to that plan later to help keep things on the right track for the long run," the insurance company says.

Winning a few million dollars would tempt any person to make a big purchase or lifestyle change — but private wealth managers at Cresset Capital advise against this.

"You need to consider how your employment contributes to your sense of self and your mental well-being," Cresset Capital says in its "What To Do (And Not Do) If You Win The Lottery" article.

"Take time to consider how and when you want to give so that you do not become resentful or end up being used for your wealth."

Instead of choosing early retirement or making some other dramatic move, the Chicago-based financial planning firm says lottery winners might want to consider taking on part-time jobs or engaging in higher education, volunteer work or passion-filled hobbies.

"This is not to say that you should keep all of the money for yourself, but take time to consider how and when you want to give so that you do not become resentful or end up being used for your wealth," the firm writes.

Question whether you should take a lump sum

Some winners are fine with taking a lottery’s lump sum, while others could benefit from taking an annuity payment (a series of equal payments broken down over a period of time).

Cresset Capital advises winners to seek input from a financial adviser to determine which option is best for them.

"Careful planning and consideration can result in a higher overall value of your win."