CLEARWATER, Fla. - Amy Pham's theory of hospitality is straightforward: "That [the customer] have the best experience they have ever had."

She often looks at her tips as a reflection of how close she came to fulfilling that goal.

"It's your livelihood, so in that moment, it's kind of like, I hope," she said.

Tuesday though, at Clearwater's Wildflower Cafe on South Fort Harrison Avenue, the usual 15% became over 6,000%.

For a $32.80 breakfast of avocado toast with sausage and a veggie quiche, the customer, who scratched out his name, left a tip of $2,021.

He wrote it was part of the "Just Be Nice Tip Challenge."

"I have never seen anybody tip like that before," she said. 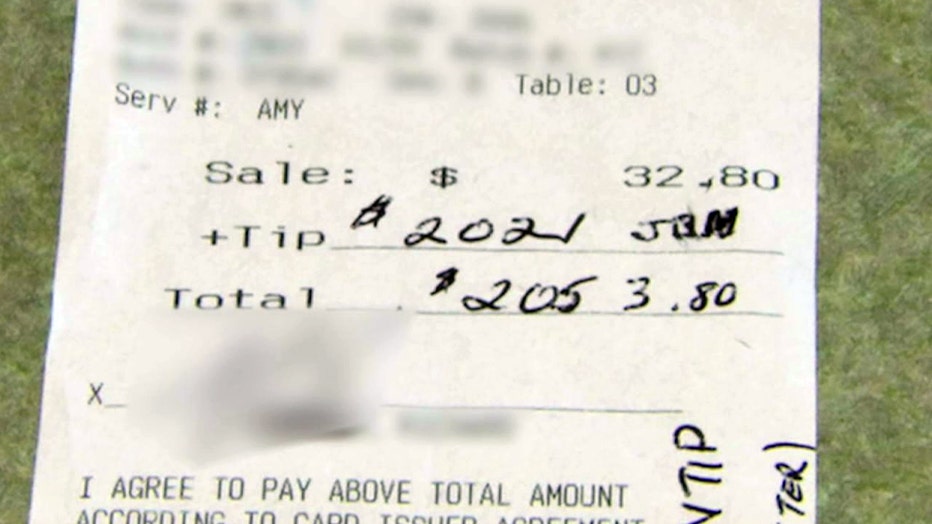 Clearwater server given $2,000 tip as part of viral challenge

It's a nice capper for a relatively tough year for Amy, who moved to Florida from St. Louis so her wife can go back to school at the University of South Florida.

But her shifts have been cut by the pandemic restrictions and her credit card debt has risen.

"There were difficult points where it was all I could think about at night before I would go to sleep, and then I would wake up and look at it as a new day and see how I could adjust things," she recalled.

Amy plans on taking her family to dinner, maybe doing a nice overnight somewhere, and then using the $2,000 to pay off some debt.

She also handed over a few bucks to some awestruck co-workers.

"I will look back on this moment and be astonished at how nice someone can be. There are a lot of negatives in life, but this reinstalls the fact that there are good people out there," she said.

She's not exactly sure why the customer picked her to give the $2,000 tip to. All she can think of is she told him her birthday is in two days. But she says the conversation seemed very normal.