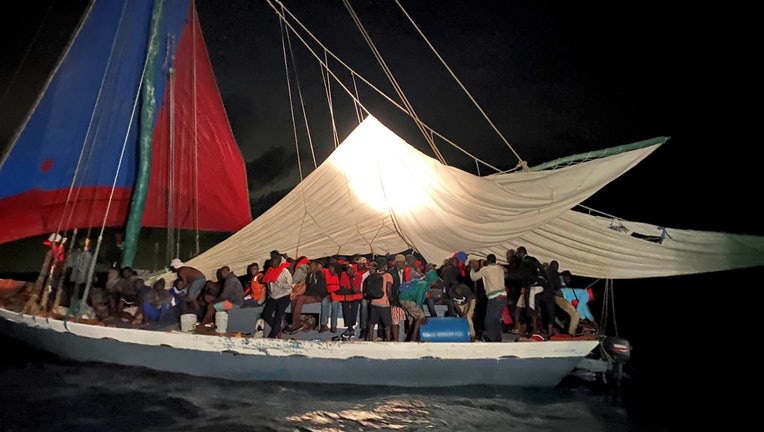 The U.S. Coast Guard rescued 176 Haitian migrants from a capsized sailboat taking on water off the coast of the Florida Keys early Monday morning. (Photo: US Customs and Border Protection)

KEY LARGO, Fla. - The U.S. Coast Guard pulled 176 Haitian migrants from an overloaded, unseaworthy wooden sailboat that was taking on water as it approached the Florida Keys, officials said.

The rescue effort unfolded early Monday morning off the coast of Key Largo after a flight crew with Customs and Border Protection Air and Marine Operations spotted the 60-foot vessel some 25 miles northeast of Anguilla Cay, Bahamas, the Coast Guard said in a news release.

WSVN reports that 11 units from the Coast Guard, U.S. Customs Border Protection and Miami-Dade Fire Rescue responded to reports of a capsized vessel after 3 a.m. near the Ocean Reef Club in Key Largo, just south of the border of Miami-Dade and Monroe counties.

The crew of the Cutter Paul Clark provided personal flotation devices to those onboard the boat, which didn't have basic life-saving equipment or navigation lights, officials said.

A crew from the Coast Guard station in Islamorada then worked with federal, state and local law enforcement officers to take the people into custody. Ten were brought to a hospital with symptoms of dehydration, including several children.

"It is extremely dangerous to navigate the Florida Straits in an unseaworthy vessel, especially off the Florida Keys where the water is extra treacherous with shoals and reefs," said Chief Warrant Officer James Kinney. "Thanks to the quick coordination among so many different agencies, no lives were lost during this interdiction."

According to WSVN, this is the second group of Haitian migrants to reach the Keys in the last several weeks. Authorities took 52 migrants into custody on Christmas Eve after they also made it to Key Largo in a sailboat.

The Coast Guard routinely returns people interdicted at sea to their country of origin. Coast Guard crews have already rescued 557 Haitians three months into the current fiscal year. That's up sharply from last year, when 1,527 Haitians had been rescued by year's end. The agency said 418 Haitian migrants were rescued in 2020, 932 in 2019, 609 in 2018 and 419 in 2017.