TAMPA, Fla. - The Arkansas Razorbacks took the win at this year’s Outback Bowl against the Penn State Nittany Lions, but that wasn’t the only storyline worth following.

Regardless of being on the winning or losing team, fans flocked to Tampa from across the country for the bowl game and were thrilled to be at a live sporting event, ringing in the new year, and being away from cold weather.

"Absolutely the greatest new year ever, it was great," said Lisa Campbell, a Penn State fan. "The fans were great on both sides, we congratulated Arkansas."

Some fans made the bowl game a full family trip.

"It was great because we haven’t had a chance to go and watch the Razorbacks play because of COVID, so this is kind of our first big chance to go and it was our son’s first football game so we had a really great time," said Stephanie and Jerad Brown, Arkansas fans. "We’ve been doing a lot of seeing and trying different things while we’ve been here, yeah, every time we come over to Tampa which isn’t as often as we’d like we always look for new restaurants and new things to do, and play tourist while we’re here." 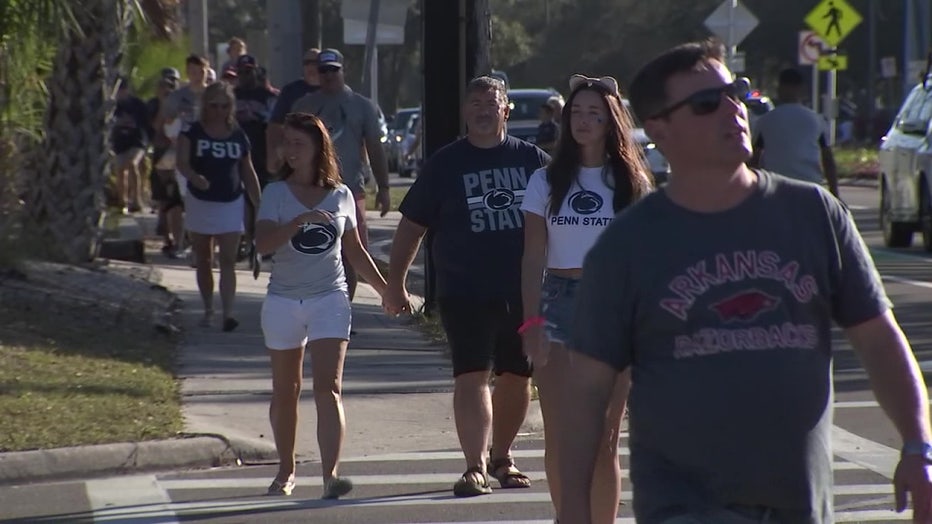 Bowl games like this help Tampa Bay showcase everything it as to offer for people in other parts of the country and brings a significant economic impact to our region, Mayor Jane Castor said during the Outback Bowl parade in Ybor City on Friday.

"It was great, we didn’t come out on top, but it was still fun to come down with the boys for New Year’s Eve, beautiful weather, nicer than Pennsylvania, I mean look at this place, couldn’t do much better than that," said Jaret Alexander and Jake Haswell, two Penn State seniors.