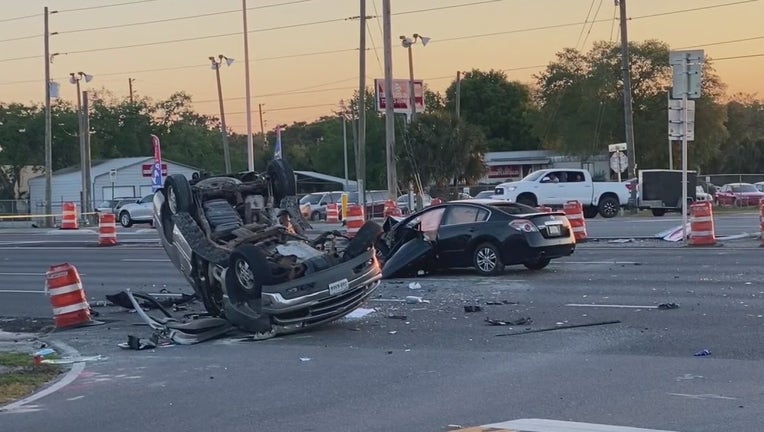 HUDSON, Fla. - Troopers with Florida Highway Patrol are investigating a crash that killed two people on US 19 in Pasco County.

It happened Wednesday evening near Beach Boulevard. Troopers say an SUV and a sedan were heading south on US 19 when the driver of the SUV lost control and crashed into a construction barrel, which then hit the sedan.

The driver of the sedan lost control and veered into oncoming traffic. When an oncoming car swerved to avoid hitting the sedan, it hit the SUV instead.

The SUV rolled over and came to a stop on the roadway.

The driver of the SUV, an 81-year-old woman from Virginia, suffered serious injures and was taken to the hospital. Her passenger, a 52-year-old Hudson man, died at the scene of the crash.

Meanwhile, construction barrels can be seen all around the intersection, where nearby drivers say a much-needed red light is being installed.

People in the area have counted 10 deadly accidents recently.

Law enforcement has long warned of the danger on US 19 and the Florida Department of Transportation said it is doing things to make the road safer, like installing pedestrian crossing areas and red lights.

Troopers haven’t released the names of the people involved in the accident.