The community held a vigil in honor of Los Angeles County firefighters shot at Station 81.

SANTA CLARITA, Calif. - The daughter of a California firefighter who was killed days before her high school graduation wore his jacket as she tearfully received her diploma in a ceremony attended by hundreds of fellow firefighters in a show of support.

Joslyn Carlon, a student at Saugus High School in Santa Clarita, attended her graduation ceremony on Thursday. Two days earlier, her father Tory Carlon was killed in a shooting at Los Angeles County Fire Department Station 81. The 44-year-old firefighter specialist was a 20-year veteran of the department. 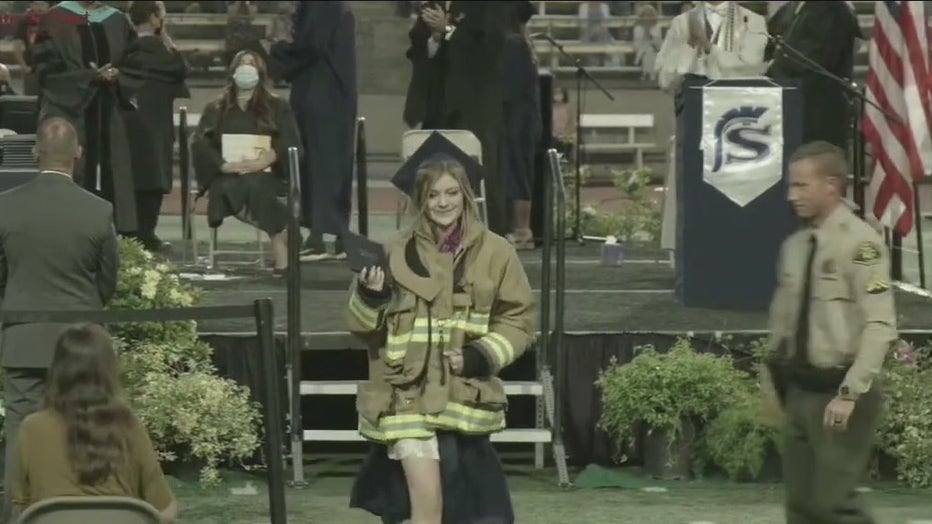 Hundreds of firefighters from across the state attended the graduation ceremony dressed in all black. Colleagues of Joslyn Carlon’s late father stood at attention as the family arrived for the ceremony at the College of the Canyons.

The crowd could be heard cheering loudly as she received her diploma, wearing her father’s fire turnout coat draped over her shoulders. A close friend of his also escorted her across the stage.

The shooting was reported at the station Tuesday morning in Agua Dulce. Tory Carlon was shot and the station’s 54-year-old fire captain was critically injured but expected to survive.

The shooter was later identified as a colleague. The gunman burned his home to the ground and was later found dead at the home in Acton, according to FOX 11 Los Angles.