WASHINGTON, D.C. - With advancements in modern technology and the use of social media, tracking down rioters seen in large crowds are easy to track down, experts say.

"A lot of arrests were made based upon the identification of certain individuals from Facebook posts, from Twitter posts, and based upon those posts, law enforcement was able to determine who they are, locate them, find them, arrest them, and potentially prosecute them," said Anthony Rickman, a criminal defense attorney.

The DC Metropolitan Police Department says officers arrested 68 rioters following the demonstrations. A majority of them are from other states and are facing federal charges.

Man seen in photos from DC riot possibly from Bradenton

FOX 13 News spoke with a woman who attended a Lakewood Ranch church where, she says, the same man attended, as well.

A Getty Images photo from the riot, showing a man carrying the Speaker of the House's lectern through the capitol building, is being used by local and DC law enforcement agencies in an effort to positively identify the man.

The Manatee County Sheriff's Office shared the photo and other social media posts with DC investigators, identifying the man in the photo as Adam Johnson of Parrish, who appeared to have posted photos on his Facebook profile about his trip to the nation's capital before his account was shut down.

FOX 13’s political editor Craig Patrick recaps the events that occurred on January 6 in Washington D.C. – from the pro-Trump mob storming the Capitol to President Trump promising a peaceful transition in power.

"How brazen could you be, by walking in, trespassing in our US Capitol, destroying it and stealing federal property, and smile for the camera; it’s Florida man," Rickman said.

The DC Metro Police Department posted a 26-page document on its website with photos of rioters, hoping people will come forward to help identify them. 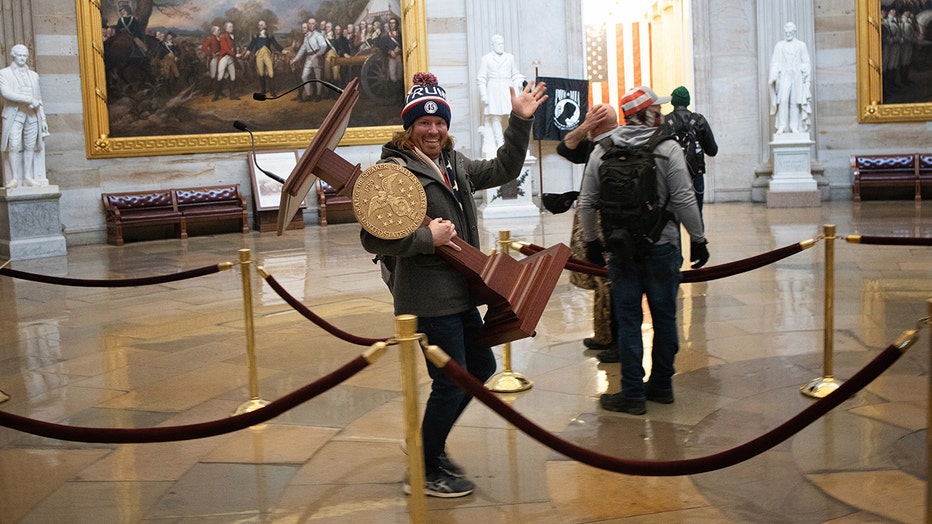 WASHINGTON, DC - JANUARY 06: A pro-Trump protester carries the lectern of U.S. Speaker of the House Nancy Pelosi through the Rotunda of the U.S. Capitol Building after a pro-Trump mob stormed the building on January 06, 2021 in Washington, DC. Congre