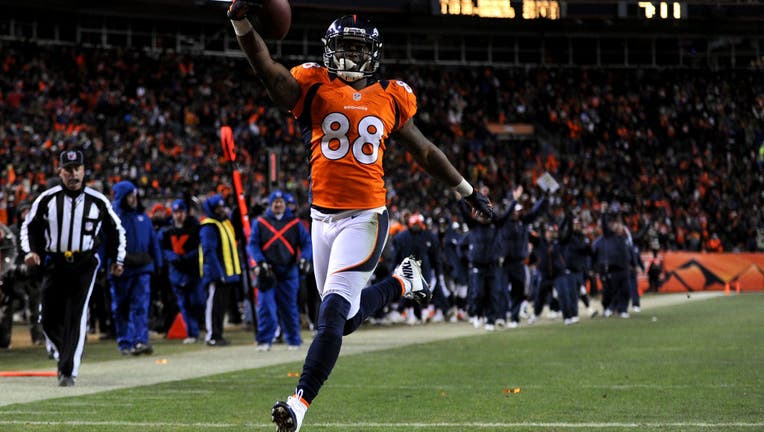 DENVER, CO - JANUARY 12: Demaryius Thomas #88 of the Denver Broncos scores a 17-yard touchdown reception in the fourth quarter against the Baltimore Ravens during the AFC Divisional Playoff Game at Sports Authority Field at Mile High on January 12, 2

The Fulton County Medical Examiner's Office released its findings in the man's sudden death. Thomas was 33 years old when he was found dead in his home in December 2021 in Roswell.

It's unclear if brain trauma from football is connected to Thomas' neurological problems.

In July, researchers at Boston University determined Thomas had Stage 2 CTE when he died.

Thomas' family donated his brain to the Boston University CTE Center. In a statement, Boston University researchers said they noticed signs of the disease, sometimes found in brain tissue of former NFL players, in Thomas' brain.

Researchers did not, however, connect CTE to Thomas' other medical problems.

Thomas died about six months after announcing his retirement from professional football.

He spent three years with the Yellow Jackets football team before the Denver Broncos drafted him in the first round of the 2010 draft. He played 10 NFL seasons, most in Denver where he helped the Broncos to win Super Bowl 50.