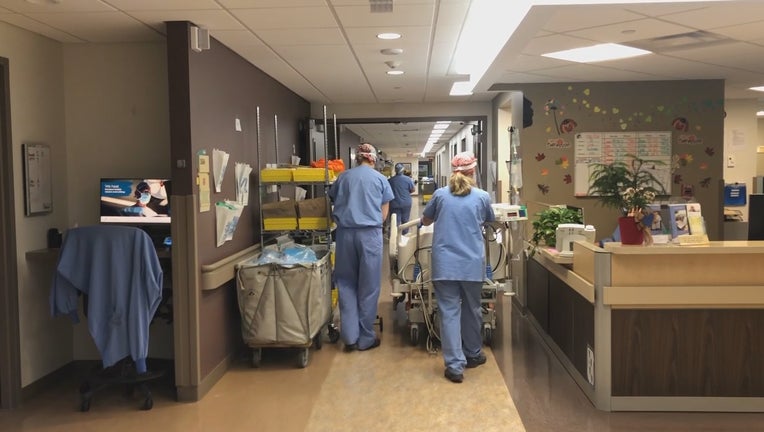 Hospital workers are working hard and around the clock to care for COVID-19 patients across the country.

Now, the governor says he also doesn’t support hospitals requiring their staff members to get vaccinated.

DeSantis would not say Thursday whether he would ban hospitals from requiring staff to get vaccinated but made clear he’s not a fan of the idea.

"It's not something I support," DeSantis said when asked about the issue during a news conference at Tampa General Hospital.

As the numbers of COVID-19 infections across the state spike and inpatient admissions soar, some hospitals are mandating vaccinations for staff members.

Jackson Health Chief Executive Officer Carlos Migoya announced at a news conference Thursday that the Miami hospital will require staff to be vaccinated or face restrictions, according to media reports. Migoya said staff who don’t have at least one vaccine dose by Aug. 23 will be required to wear N95 masks at all times. Migoya also said the hospital will give one-time $150 bonuses to workers who are completely vaccinated by Sept. 30.

Also, the federal Department of Veterans Affairs is requiring most of its medical staff to get vaccinated.

AdventHealth hasn't mandated the vaccine yet, but hospital officials have said they are considering it.

DeSantis said front-line health care workers at Florida hospitals --- as well as nursing homes --- were among the first people who had access to shots after the federal government gave emergency-use authorization to the Pfizer and Moderna vaccines in December.

While DeSantis said between 80 percent and 90 percent of physicians got vaccinated, he said the uptake among nurses wasn’t as great.

Those comments were underscored by an AARP report last month that showed just 42 percent of Florida’s nursing-home workers were vaccinated. That was the second-lowest vaccination rate in the nation during a four-week review period and was significantly less than the 56 percent who were vaccinated nationwide.

"How that is implemented," DeSantis said of vaccine mandates, "and how people respond to that, there will definitely be some reaction to that."

DeSantis appeared at Tampa General as Florida’s COVID-19 death toll rises, infections spread and hospitalizations soar because of the highly transmissible delta variant of the coronavirus.

Florida reported an additional 20,133 new COVID-19 infections on Wednesday, making the state responsible for about 22 percent of the new cases reported nationwide for the day, according to data posted Thursday by the federal Centers for Disease Control and Prevention.

Meanwhile, the number of people in Florida hospitals with COVID-19 reached 12,888, according to data maintained by the U.S. Department of Health and Human Services.

COVID-19 patients are occupying 22 percent of the hospital beds in the state, the highest percentage in the nation, the data show. Florida also lags in vaccination rates, a factor that has contributed to the spike.