TAMPA, Fla. - Gov. Ron DeSantis on Thursday signed legislation that will dramatically expand a voucher program that helps students go to private schools, the latest step in a two-decade push to expand school choice in Florida.

The Republican governor said the bill “expands and builds off the success” of the Florida Empowerment Scholarship program, which he pushed to create shortly after taking office in 2019. The bill (HB 7067), passed during the legislative session that ended in March, will help nearly 29,000 more students receive vouchers next school year.

“This will be more opportunity,” DeSantis said during a news conference at Cristo Rey Tampa Salesian High School, a Catholic school in Tampa.

“If we in the state of Florida can say we are doing everything we can to make sure any child, regardless of income, regardless of family status, regardless of race or ethnicity, has tools to be able to make the most of their God-given talent … we are going to be doing probably as much as we can do,” the governor said.

The program, which is funded directly from the state education budget, is designed to serve lower-income and working-class families. But critics argue the state should focus on spending more money on public schools rather than expanding taxpayer-funded vouchers.

A number of organizations, including Americans United for Separation of Church and State and the Southern Poverty Law Center, have threatened to challenge the program legally.

The organizations argue it is unconstitutional for Florida taxpayers to give scholarships to students to attend private schools, including religious schools like Cristo Rey Tampa Salesian High School. 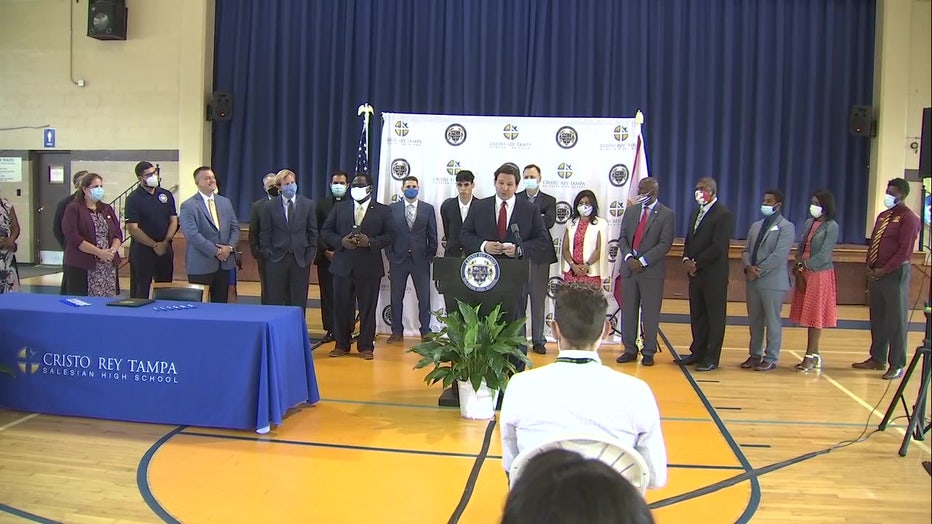 “Our biggest concern is religious freedom. Taxpayers should never be forced to subsidize religious instruction, and that’s exactly what this program would do,” Alex Luchenitser, an associate legal director for Americans United for Separation of Church and State, told The News Service of Florida last year.

A lawsuit has not been filed, but a complaint is still in the works, Liz Hayes, a spokeswoman for Americans United for Separation of Church and State, told the News Service on Thursday.

The push to expand school choice in Florida began after former Gov. Jeb Bush took office in 1999. Since then, the Republican-led Legislature has created voucher programs for bullied kids and students with disabilities and the Florida Tax Credit Scholarship program, which is funded by corporations that receive tax credits.

“Florida continues to be a national leader in educational opportunity for families and students,” Bush, the founder of the Foundation for Excellence in Education, said in a statement Thursday after DeSantis signed the bill.

“As our state and nation face historically challenging times, it is imperative that we help disadvantaged students access the educational setting that best fits their unique learning needs,” Bush added.

Senate Education Chairman Manny Diaz Jr., R-Hialeah, called the bill a “victory” and vowed to push for further school-choice expansion in the future.

“We’re not going to stop, governor. We are going to continue to push forward until every family in the state has the opportunity and every student regardless of ZIP code has a chance to choose the school that is the best fit for them,” Diaz said during Thursday’s news conference.

In addition to expanding the Family Empowerment Scholarship, the bill also changes some eligibility requirements for students who seek vouchers.

For example, a student who is unable to renew a Florida Tax Credit scholarship during the 2020-2021 school year because of a lack of funds in the program will be given priority to receive a Family Empowerment scholarship.

Aside from the measure, DeSantis and Education Commissioner Richard Corcoran announced this month that the state will provide a $30 million “safety net” for the Florida Tax Credit Scholarship program by tapping into the Governor’s Emergency Education Relief Fund, which is part of a coronavirus federal relief package for K-12 education.

So far, corporate contributions to the Florida Tax Credit Scholarship program have remained “fairly steady” during the pandemic, according to Ron Matus, a spokesman for Step Up for Students, a nonprofit that administers voucher programs.

Matus told the News Service on Thursday that contributions have been steady, "in part because some donors generously offered to increase their contributions in this time of uncertainty."

“However, we know the situation is fluid, and we know how many students and families depend on these scholarships, so we continue to monitor closely," he added.

State education officials, however, said the $30 million would be set aside for vouchers because “economic uncertainty has slowed commitment for contribution renewals,” according to a 143-page document released by the Florida Department of Education this month.

“Up to $30 million will be reserved, if necessary, to ensure these life-altering scholarships are protected for those students who are seeking to renew their existing scholarship,” according to the document.