LAKELAND, Fla. - For nearly two hours, Lakeland leaders spoke about possibly making face coverings mandatory in the city, but when the mayor moved to approve the executive order, no commissioner seconded the motion.

"The result of this will be in the numbers," Mayor William Mutz said after the discussion, adding that the city hasn't been seeing the "social response" they would like in residents following social distancing.

"We are not taking it seriously and it's impacting my home," he said, adding that he was "extremely disappointed" and wanted to keep the resolution alive.

The mayor said that there are residents who may not know someone who has COVID-19, but there are people with their own "personal examples" who support a mask mandate.

"It is very highly supported in a large segment in our population. Those people are not going out," Mutz said. "Those businesses…I truly believe will have more come because they have that enforcement side."

Commissioner Scott Franklin was vocal about voting against a possible mandate, adding that he saw people riding bicycles in the city parks that were supposed to be closed during the lockdown.

"I think we're putting business owners in a bad situation. I would be much more in favor of our education efforts and pass a resolution encouraging that they use them," he said. "I'm not in favor of putting something forward that we cannot enforce."

During the commissioner's meeting, Danielle Drummond, president of Lakeland Regional Health, confirmed there is evidence of community spread of the coronavirus. She said there has also been an increase in the number of ventilators in use at the hospital.

"This community spread can put us at risk as a healthcare provider," she explained. "We know this disease can spread in a few different ways…the use of masks by everyone really allows us to slow the spread. You're wearing the mask to protect everyone around you." 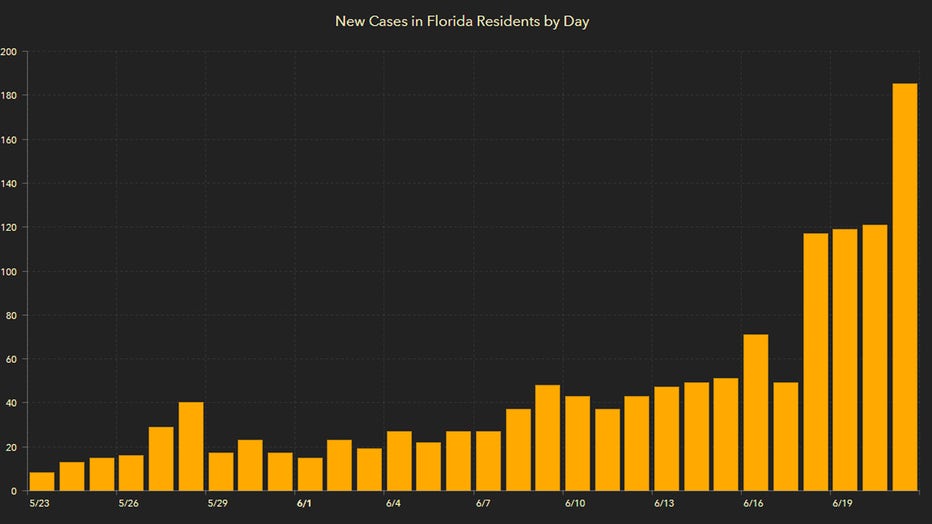 Drummond said if the percent positive rate remains at 10% or below, experts have recommended that health care facilities can still manage the increase in cases. However, she said, that statistic has been above 10% in the past few days.

Dr. Steven Achinger of Watson Clinic said wearing masks is the least expensive way to mitigate the spread of the virus.

"Masks are the least expensive mitigation measure that this commission could be considering," he said. "We all understand the expense of a shutdown…and we want to avoid that. Scientific bodies across the U.S. agree that it can slow down the spread of the disease."

"Don't buy into the fallacy that if it's just young people being affected," Achinger added. "It's always spread from community to community -- from young people to old people."

Commissioner Phillip Walker asked Drummond for the total number of deaths due to COVID-19 in the city, but Drummond said she didn't have city-specific information, but added that some of the patients in the ICU currently are those in their 30s or 40s.

Commissioner Stephanie Madden compared the coronavirus to a hurricane, saying she wants it to be communicated to the city residents that Lakeland is now in the "cone."

"If you're tempted to think that this illness is only going to impact people who are going to die anyways, I believe that's the wrong way to look at that," Dr. Achinger said. "If you are on the other end of that spectrum, you'll probably think a lot differently."

Mayor Mutz asked Achinger what he would say to people who think the mask doesn't protect anyone at all.

"I think that's completely wrong," Achinger said. "The mask is being worn to reduce the spread of the illness from whom may have it and don't know that they have it. That protects those who are in the same space, whether that person is wearing a mask or not. It will provide protection. The more people wearing  a mask in the public space, the safer it is."

He said he has heard people who oppose a mask mandate, say it takes away individual rights. Achinger compared the debate to back when smoking was allowed on an airplane.

"We realize that banning smoking in public spaces [would make people upset], but it reflects the rights of those being damaged, being affected by the smoking of others. Our public spaces should be places that is safe to go into," Achinger said. "We don't want to take away individual rights, but we do ask people to do things for the sake of public health."

Commissioner Franklin said he was concerned about an individual's right to choose whether to wear a mask or not.