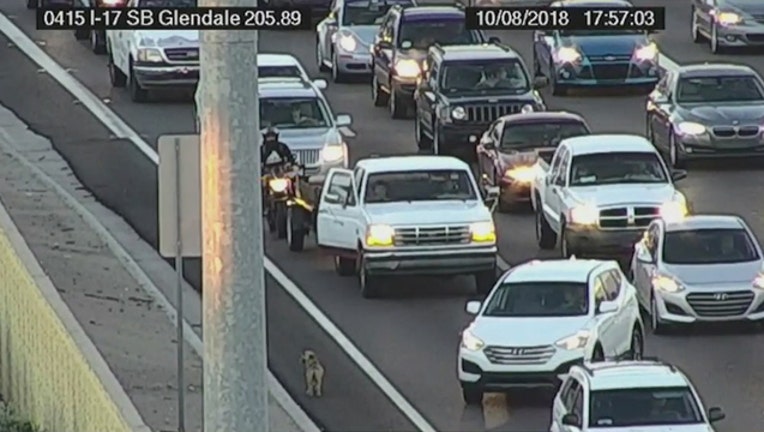 PHOENIX (KSAZ) -- Rush hour traffic is always bad on the I-17, but on Monday evening, it really went to the dogs, as a dog got loose on the freeway, running through traffic and causing a meltdown on an already tough stretch of freeway during the evening commute.

This story, however, does have a happy ending.

The dog, a three-year-old beagle/chow mix named Harley, is safe at home after his scary adventure. Harley managed to find a way out of his backyard, which is about a block away from the I-17 Frontage Road. He then followed the Frontage Road, and got on to the I-17. He had a couple close encounters with speeding cars, but ultimately found his way to the shoulder, traveling the same direction as the traffic he was stopping along the way.

"It was a lot of anxiety for both of us, especially him," said owner Maddie Justus. "I couldn't imagine how he felt out there, especially because he's afraid of cars and afraid of people. I was really afraid for him."

Justus adopted Harley earlier this year from a shelter, and he snuck out of his backyard this evening.

"Our gate doesn't close all the way. I put a trash can in front of it so he wouldn't slip out, and he still slipped out," said Justus. "I drove by a couple neighbors, and they told me they saw him run full speed toward the Frontage Road, so I went on there and heard a bunch of honking."

Harley stopped traffic at times, cutting across lanes to get to the HOV lane. After nearly 20 minutes on the highway, a driver stopped, got out of his truck, and picked up the pooch. A DPS trooper took Harley into custody, but not for long. Harley has an ID tag on him, so the trooper dropped him home.

"He got a lot of attention tonight," said Justus. "He's very lucky to be home, and I hope he knows that now."

Maddie says after Harley got home, all he wanted to do was cuddle. She says he won't get to play in the backyard, unleashed, anymore. Thankfully, Harley was not hurt, and he did not cause any accidents or injuries.