Carlile was discovered earlier this week and now he is ready to make a match. He is a 5-month-old German Shepherd with a long tongue, floppy ears, and big smile. A family from Spring Hill heard his story and made sure they were first in line to adopt him. They made the drive to Tampa and parked at the shelter by midnight.

TAMPA, Fla. - Workers at a Tampa car wash heard the sound of whimpers coming from a dumpster earlier this week. They notified their supervisor, who ventured out to investigate.

When he peeked inside the dumpster, he found Carlile, a five-month-old German Shepherd, who was abandoned. Carlile's big brown eyes were looking up at him. His long tongue rolled out, his floppy ears lopsided as he tilted his head to gaze up at the new face.

Carlile was even wearing a smile – all while still inside the dumpster.

During the week, news spread on social media about Carlile's story. It caught the attention of one Spring Hill family, who lost their own German Shepherd last year. 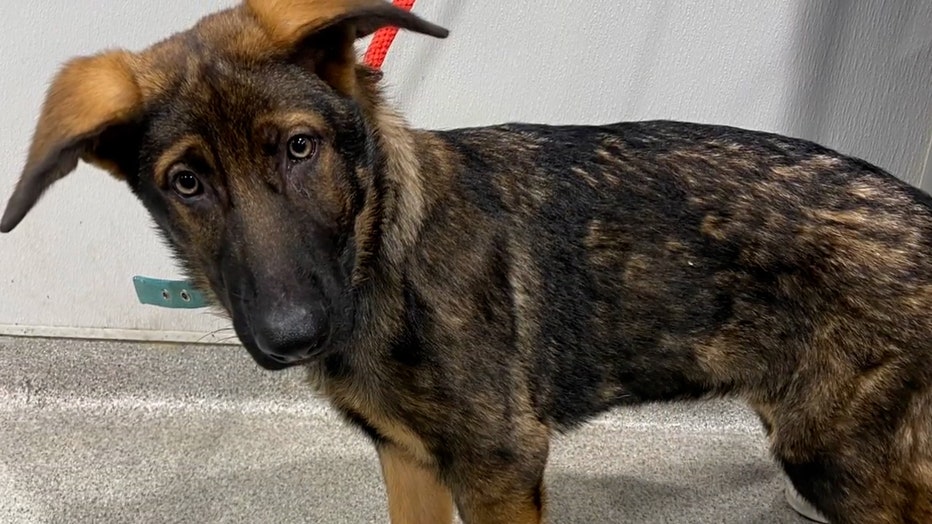 Young Carlile turns and looks at the camera.

Pam Serio said she first learned of the story from FOX 13 on Thursday night and saw the young pup. Her night changed after that.

"I’m lying in bed last night," Pam Serio said. "I go online and see that (the shelter) had added him in. So, I just got out of bed at 11 o’clock and took off here. We lost our Shepherd last year, so we were really wanting one."

She arrived at the shelter around midnight and parked her car to be first in line to adopt Carlile. Serio said she and her husband had tried to adopt German Shepherds three previous times but had been too late each time. 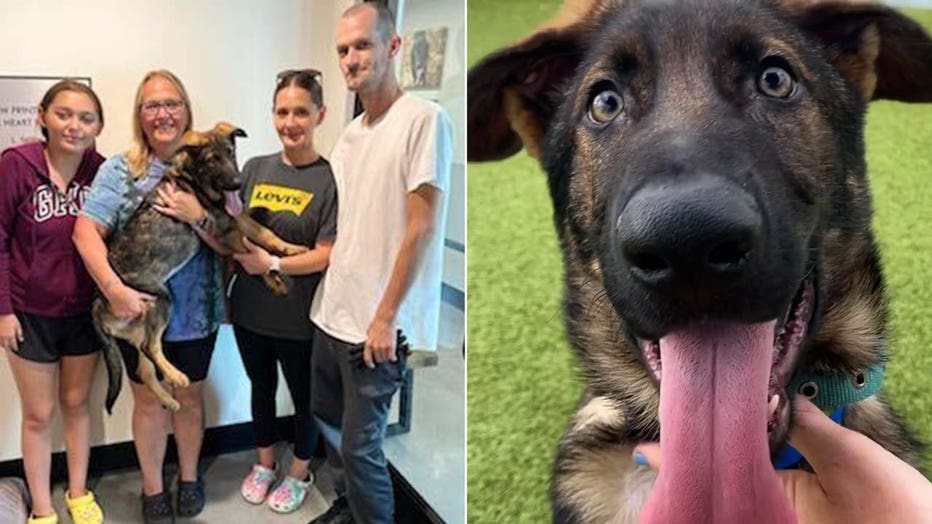 The Serio family and Carlile pose for the camera (left). Carlile sticks his tongue out (right). Both images provided by the Humane Society of Tampa Bay

After he was found in the dumpster, the young pup was brought to the Humane Society of Tampa Bay for medical attention. There, the staff discovered he had hookworms and treatment began. By Friday, Carlile was microchipped neutered, vaccinated, and ready to give his undivided love and attention to his new pet parents.

The shelter staff said he's getting treatment for parasites, which should clear up in the next couple of weeks.

Otherwise, they told FOX 13 that Carlile is a happy and healthy puppy. They also said the shelter has been flooded with calls and emails from people looking to adopt him after social media posts about the rescue were shared hundreds of times.

The Serios signed the adoption paperwork as soon as the shelter opened, meaning Carlile will be heading to his forever home in Hernando County. The family is considering changing his name to "Bruce Wayne."

The Humane Society of Tampa Bay has hundreds of other homeless dogs, cats, and smaller pets in need of a home. Last year, the shelter says it saved more than 13,000 animals.

They also wanted to remind folks that they offer food assistance and a food pantry for struggling pet owners. You can find more information here: humanesocietytampa.org/service/keep-your-pet.