PALM HARBOR, Fla. - Her scars tell her story of survival. But chances are, when you first lay eyes on Denali, this dog's smile and the wagging of her tail tell a completely different story.

"She’s so happy, that her whole body wags when her tail wags," said Karey Burek, who adopted Denali three years ago.

In August 2018, she nearly died when her owner, Brandi Corrigan, doused Denali, her husband's favorite dog, in gasoline. Investigators said it was all because of a domestic dispute with her spouse.

Police said she let six dogs out of the house, but trapped Denali in a kennel and then set the house on fire. This past June, Corrigan was sentenced to eight years in prison for the crime. 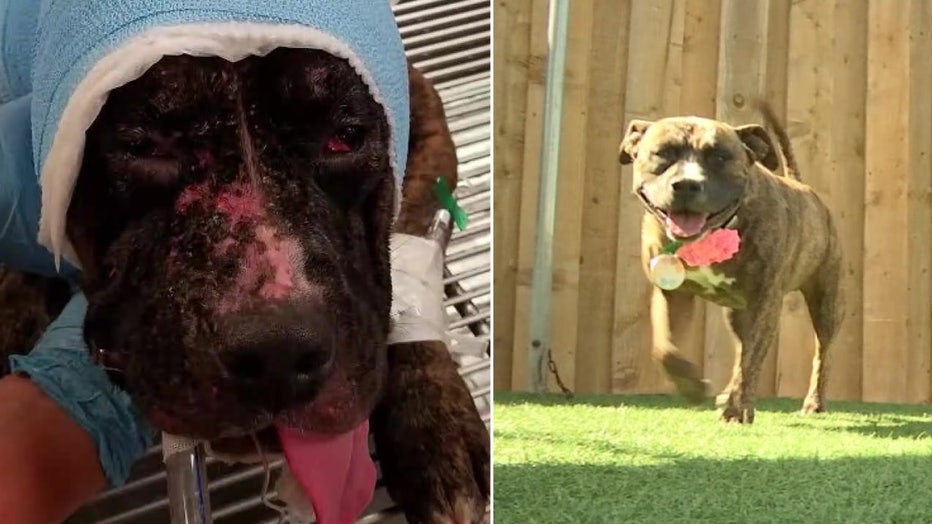 "There’s still some spots on her back where the deepest burns were," Burek said, pointing out her scars. "She’s been through so much – to look at her before pictures and see how badly she was burned and abused, and just to see her come through that and be so happy and forgiving, and wagging her tail, and happy to see people."

She sees plenty of people, including senior citizens, students, those with special needs, and even airport travelers.

By making animal abuse a felony, the PACT Act will hopefully have the effect of stopping abusers.

"She’s an airport pup – we’re there once a week visiting travelers, and TSA and the staff there," Burek said.

But perhaps her most important role is her newest to date.

"She visits with other survivors of domestic violence," Burek said.

She believes Denali's positive demeanor translates to those victims.

"The one thing I hear a lot is that she still loves people, even after one person did this to her basically, and that she hasn’t lost her spirit, or her kindness," she said.

Denali's story shows anyone, through the simple wag of a tail, that there can be a happy ending.