TAMPA, Fla. - From forklifts to cranes, construction can be seen in every crevice of downtown Tampa’s Water Street.

"The whole team comes together – the contractor, the owner, the architect. The whole design team. To celebrate that milestone," he said.

A "topping off" ceremony is a long-standing tradition to commemorate the completion of a building's structure. And now begins the marathon to finish construction by the end of the year. 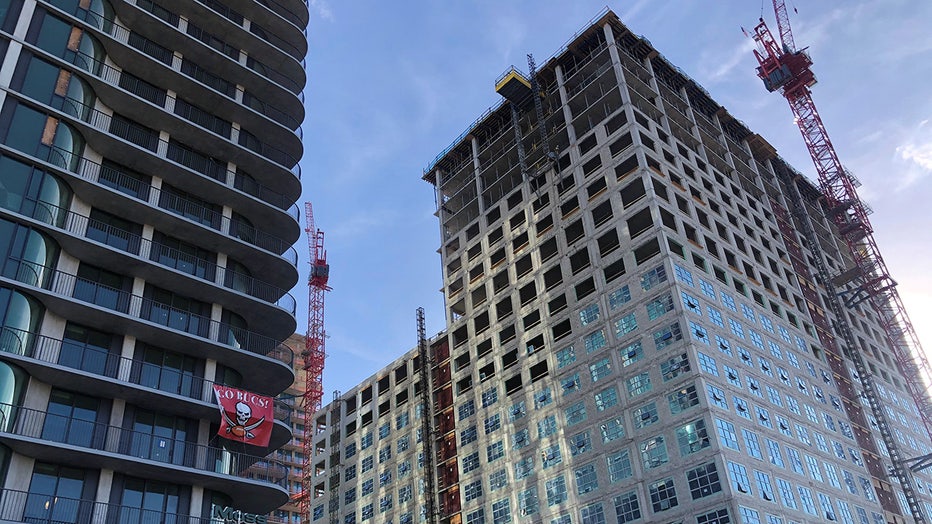 "A large pool deck area, exercise rooms, work rooms, and places for people to hang out or have a small gathering," Mills said.

And in a time when home-office space is a hot commodity, this place fits the bill.

It’s still months from completion, but people are already paying millions to live in the new 26-story building that will bring nine floors of 'ultra-luxury' hotel rooms and 17 more of exclusive condo space.

"Either amenities or spaces in the unit for work, or that could be a flexible space that could be used for work," he said. "Definitely here there is going to be ample space for people to set up a laptop and work away from their apartment in a spacious amenity."

The project kicked off four years ago, and Mills says much of the focus was creating an aesthetic that complimented Tampa’s rich history.

"We have a kind of industrial aesthetic for the building that is referencing Tampa’s industrial past," he said.

After nearly three years of hard work, the JW Marriott on Water Street will finally open its doors to the public

But even if you don’t live here, what’s right outside will be a huge draw. The design of Water Street’s main drag was inspired by the sprawling streets of Europe, similar to Las Ramblas in Barcelona.

"It’s really sort of generous dimensions, the street, and it’s got a wide sidewalk on both sides that will be landscaped and so, it really will be the main thoroughfare and hub of the district," Mills added.

At this time, rental rates for 1050 Water Street have not been released.