DUNEDIN, Fla. - An autonomous shuttle takes to the streets of Dunedin Wednesday under a pilot program with the Pinellas Suncoast Transit Authority.

PSTA brings its self-driving shuttle AVA, or autonomous vehicle advantage, farther north from St. Pete to see who would ride in a self-driving vehicle to explore their city. The bright coral shuttle catches people’s attention.

"We talked about it when we saw it on the way here, and we said ‘Wow.’ This is the first time we saw it," said Frank Czaja, a visitor from Chicago.

PSTA first tested out the technology in November 2020 in downtown St. Pete. PSTA public relations coordinator Stephanie Rank said it was a hit with nearly 5,000 people riding in five months.

"Now we’re not saying autonomous buses like our actual service buses are coming soon, but we’re just trying to figure it out see how the community reacts to it. See what they like. See what they don’t like," said Rank. 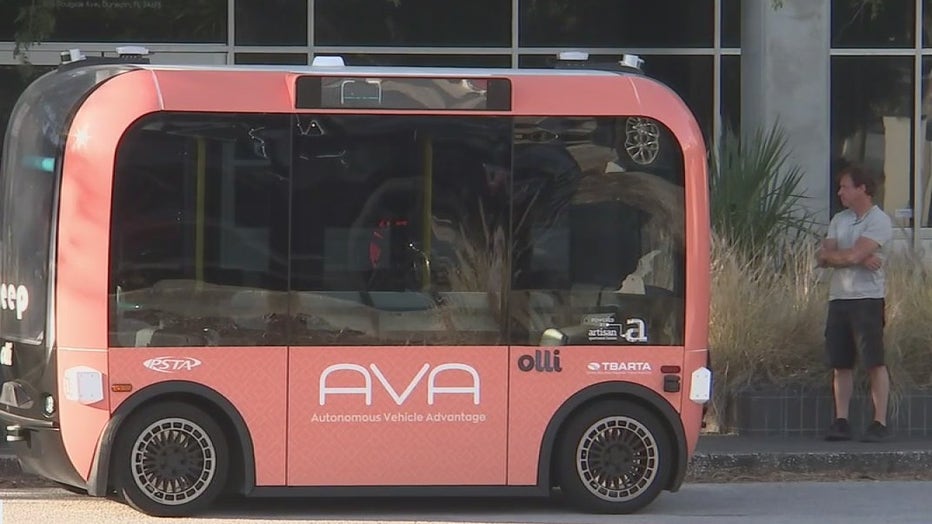 City leaders open that AVA brings a little something extra for visitors and locals when they hop on, and they have three months to try it out as part of the pilot program.

AVA will drive two routes, going down Main Street downtown and on Douglas Avenue past the TD ballpark where the Toronto Blue Jays play.

"We hope to take people to the game. You can get off at a stop pretty close to there and walk to the ballpark and enjoy a game," said Rank. "You can park even in downtown Dunedin or go get a bite to eat after the game."

City officials said three to six people fit inside the shuttle, and it does not drive faster than 15 miles an hour.

It’s an unconventional ride in northern Pinellas County that visitors said will sure to start a conversation.

"I also think it would be a fun way to experience a non-driver. You hear about them, but you don’t ever really see them. And I think it’s just a really cool experience," said Barbara Czaja, a visitor from Chicago.

The shuttle starts Wednesday and will run Wednesdays through Sundays from 10 a.m. to 10 p.m. PSTA said it is funding the program with TBARTA, and PSTA plans to move the shuttle to Clearwater Beach after the Dunedin pilot wraps up in August.