Here's what not to throw away

DUNEDIN, Fla. - Throwing the wrong things in the trash could lead to a dangerous fire. It happened twice in two weeks last month in the back of a garbage truck in Dunedin.

The City od Dunedin is reminding everyone there are things that do not belong in your curbside bins.

Bob Fichtner has worked 17 years as a garbage truck driver in Dunedin. Fichtner maneuvers the massive sidearm truck through the streets, constantly alert and careful.

Those cameras were rolling on July 19 when his usual route hit a detour. Flames erupted as Fichtner compacted a load of trash, and the fire continued to burn as he calmly stopped the truck, grabbed the fire extinguisher, and put out the blaze.

"Most of the time they don't go out that quick, especially if it's gasoline or any combustible materials just could go up in flames," he said.

Officials said someone had thrown out a detergent bottle filled with gasoline. It spilled all over the back and just one-minute later, ignited the fire.

The following week, on the same street, it happened again. Fichtner's trash load caught fire a second time, and city officials said citronella tiki torch oil was to blame. Fichtner was able to compact the debris to snuff out whatever was burning. 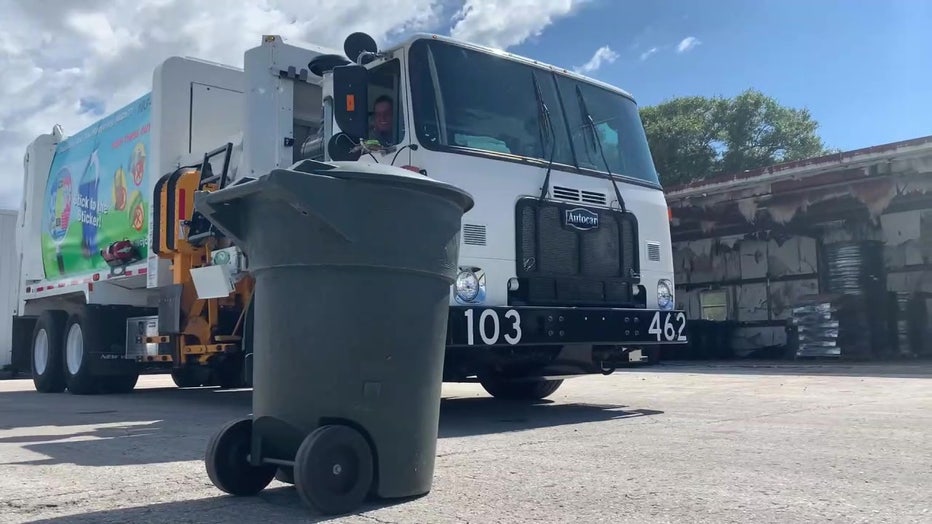 "There was a lot of smoke. And I would assume there's some fire in there as well to make it smoke," he said.

Two fires, two weeks in a row, putting the driver and the brand-new truck at risk.

According to the Bureau of Labor Statistics, working as a garbage collector is the sixth most dangerous job in the country because of deadly work injuries. That is why Dunedin Solid Waste makes sure employees get regular training.

"A lot of our policies, our safety policies and regulations are geared towards making sure that everyone's doing the things that they supposed to be doing," explained City of Dunedin Division Director for Solid Waste, William Pickrum.  "So when things do happen, such as this that Bob had to contend with, it becomes second nature."

What is not supposed to happen is residents carelessly tossing away flammable items that have the potential to combust or even explode. Things like batteries, liquid paint, pool chemicals or propane tanks. It is dangerous, and it is actually illegal to put those hazardous chemicals in your curbside container.

"It's easy to toss the wrong thing into your trash and forget about it," Pickrum said. "And at the end of the day, we want to make sure that we can get the residents the right information, so they are aware of it."

Officials hope both these recent incidents serve as a serious reminder.

Pinellas County has a household electronics and chemical collection center that residents can visit to dispose of these hazardous materials for free. There are also mobile and monthly collection events folks can take advantage of.