Brought together by organ donation

ELLENTON, Fla. - When you see a specialty license plate, you get a glimpse into someone's life - their favorite team, their college, their job, or perhaps, the greatest gift they've given or received.

It was a very special meeting Tuesday at the Manatee County Tax Collector's Office. Three people, brought together by organ donation, went inside to buy vouchers for the new Donate Life Florida specialty license plates.

"You were lucky and a family made that decision that gave us this life," Allyson said to her daughter. "Her first birthday was definitely a milestone event just to get there."

There have been many milestones since then. The most recent include turning 18 and earning her driver's license.

"It makes me want to give back in any way I can," Ainsley said. 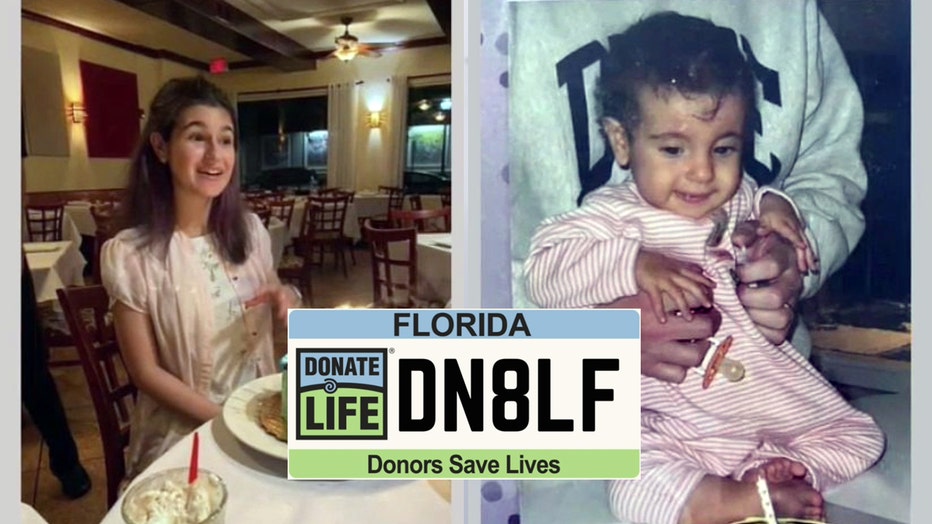 "My son, Anthony was an organ donor eight years ago. He was in an accident and we decided as a family that it was the right thing to do," Fowler said. "It wasn't even a question. It was, what do we do to make this tragedy turn into something positive? And what better way than helping somebody else and giving their life back?"

Something as simple as a license plate could inspire a new donor and bring those numbers down. Though the Donate Life Florida specialty plate went away for a couple of years, legislation enacted in September has allowed the non-profit to produce it again.

"It's exposure. It's getting people to talk about it because they see it and maybe ask more about it to learn more," Allyson said.

3,000 vouchers must be pre-sold within two years before the plate can go into production. On Tuesday, together, Ainsley, Allyson and Gretchen walked into the Manatee County Tax Collector's Office to be among the first to buy their plate vouchers.

"Last week, she signed up to be an organ donor even though she's been a recipient," said Tax Collector Ken Burton Jr. "She's one of over 30,000 that we've done all year."

Gretchen Fowler has no doubt that they'll get the 3,000 vouchers sold. "We'll get this done," Fowler said. "Now I can go see somebody and see it on their car and go, oh let me share my story, too and you share your story and maybe we can share it to more people and it gets the word out about donation."

The specialty plate costs $33. $25 of that goes directly to Donate Life Florida to help them provide donor education and to manage Florida's official organ and tissue donor registry.