TAMPA, Fla. - Those left behind after a loved one is killed face a lifetime of grief and the holiday season can be especially difficult. The Tampa Police Department is trying to ease the burden on families whose loved ones were victims of homicide in the city.

Officers delivered Christmas gifts to seven of those families Wednesday, packing up stuffed animals, games, bicycles and toys to bring a little holiday cheer. Interim chief Delgado said the department has made the delivery of Christmas presents to homicide victims’ families for a few years now.

"We invited Rise Up for Peace foundation to come with us and do seven families that have been victims of violence of the last several years, just to kind of give them something," said Delgado.

They belong to a group no one should be in, including Glenda-Marie Washington.

"When I got to I-275 and Sligh, I got the phone call that he was shot. I never thought in a million years I would walk this road," said Washington about her son, who had just landed a new trucking job before his death. 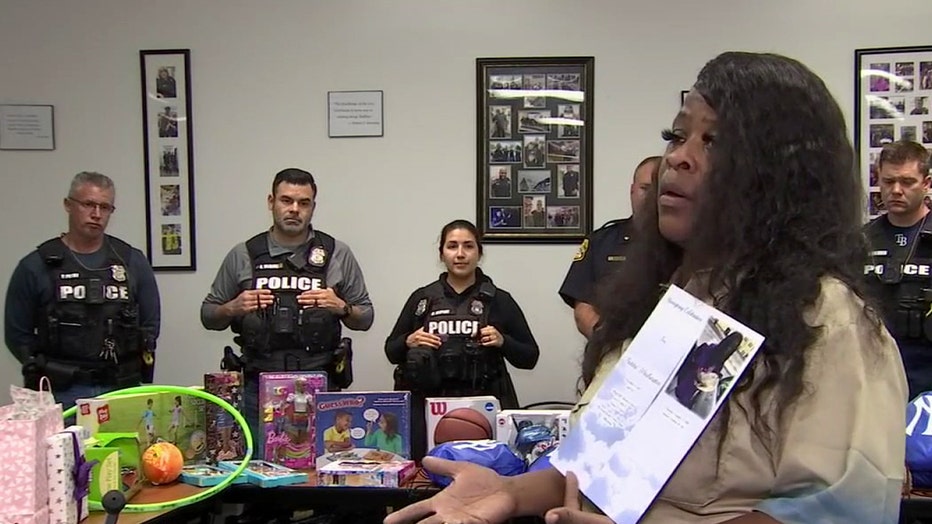 Washington said her 23-year-old son, Gary "Bubba" Washington, was killed on October 30 on Broad Street. No one has been arrested for his killing.

"They’re going to go through the holiday season now with the loss of a loved one, and we just want to provide the family something to make this a little bit better situation for them," Delgado said.

The gesture means something to Washington. She said her son loved football, and her gifts allow her to share that with her son’s four-month-old baby.

"This is a wonderful thing that they’re doing. With my heavy heart, I appreciate being here today. I feel like the police department cares," Washington said.

Washington wants her son to be remembered and for no one else to go through her pain.

Interim chief Delgado said all Tampa residents, no matter where they live, can do things to help prevent gun violence, including locking car doors to keep firearms that are inside off the streets.