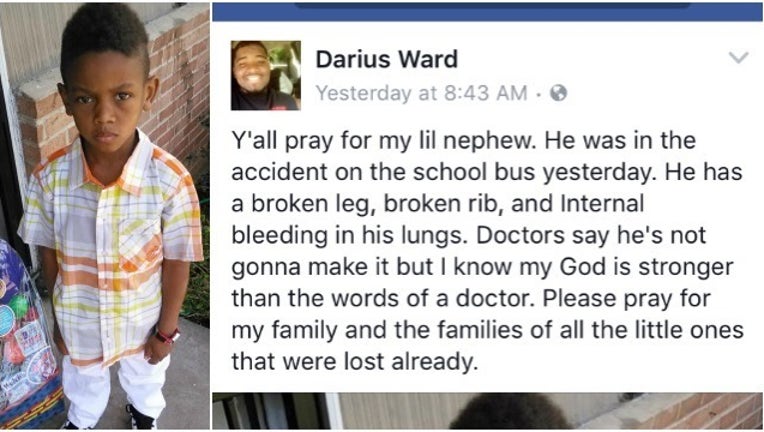 CHATTANOOGA, Tenn. - A somber update to the plea from an uncle of one of the students onboard the school bus which crashed Monday in Chattanooga. The family now says the child has died.

Darius Ward shared a picture of his nephew Tuesday morning, asking people to pray for his family as well as all those affected by the wreck.

"My lil soldier didn't make it. They couldn't revive him. Please keep the prayers flowing for my family and everyone else involved. I really do appreciate every single one of you who tried to reach out to me. God is still working."

About three dozen children had been riding on a bus police said was traveling too fast Monday afternoon when it veered off a narrow, winding road and crashed into a tree on the way home from elementary school.

The driver of the bus, 24-year-old Johnthony Walker, was arrested and charged with five counts of vehicular homicide. Police said Walker was driving well over the posted 30 mph limit when he lost control of the bus.

He was jailed on $107,500 bail for a court appearance Nov. 29 on charges that also included reckless driving and reckless endangerment. It was not immediately known whether he had a lawyer.