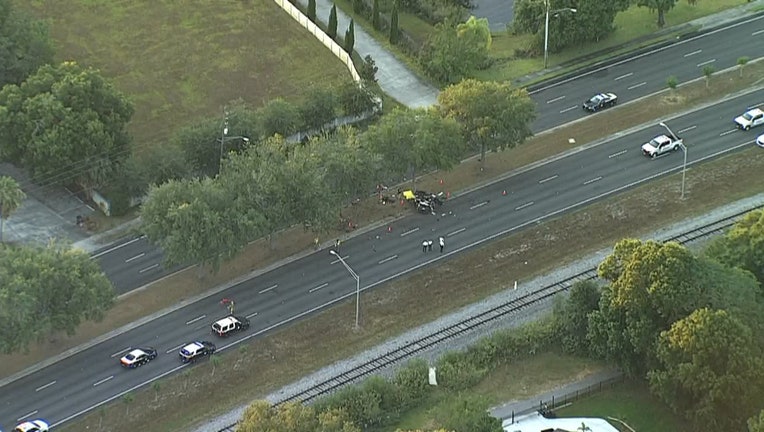 LUTZ, Fla. - Two people were killed in a single-vehicle crash after the driver was speeding and crashed into a tree, troopers said.

The crash occurred before 3:30 a.m. Tuesday near Bellamere Palm Court. Florida Highway Patrol investigators have since reopened the southbound lanes near the intersection. One northbound lane is open.

Troopers said the male driver of the vehicle, a 22-year-old from Wesley Chapel, was heading south with two passengers on U.S. 41, south of County Line Road. Investigators said he was speeding when he "failed to negotiate a curve in the roadway." The vehicle entered the center median and crashed into a tree.

The impact caused the engine block to separate and landed in the northbound lanes, according to FHP.

Troopers said the driver died at the scene. The rear seat passenger, a 24-year-old man from Zephryhills, was not wearing a seat belt and was ejected from the vehicle. He also passed away after the crash.

The front-seat passenger, a 22-year-old man from Tampa, had critical injuries and was taken to a nearby hospital.

FOX 13’s traffic reporter Mariah Harrison suggests using Interstate 275, Interstate 75, or Dale Mabry Highway as alternative routes. There is no word yet on when lanes will reopen.