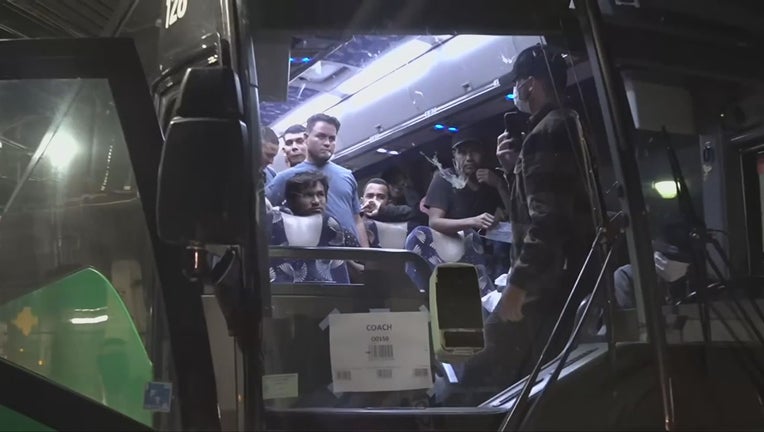 Texas Gov. Greg Abbott said the migrants were dropped off at the Port Authority Bus Terminal in New York City.

In addition to Washington D.C., New York City will now be a drop-off location for the busing strategy.

It’s part of Abbott’s response to the Biden administration’s open border policy, which the governor said is overwhelming Texas communities.

Gov. Abbott orders border authorities to send migrants back to port of entry

Governor Greg Abbott ordered the National Guard and DPS to detain and deliver illegal border crossers back to ports of entry. However, his executive order did not declare an invasion along the Mexican border.

Abbott said the migrants can receive the abundance of city services and housing the New York City mayor has "boasted about within the sanctuary city."

As one of the few cities in America with right to housing laws, New York City is required to provide emergency shelter for every unhoused person.

Also on Friday, the National Guard denied a request from Washington D.C.’s mayor to help with the busloads of migrants Texas and Arizona have dropped off there.

Abbott called it a way to bring the illegal immigration issue to Washington. While D.C. Mayor Muriel Bowser said she welcomes the undocumented migrants, they have overwhelmed aid groups in D.C.

"We need space, and we need the federal government to be involved, so I’ve asked for a deployment of the guard as long as we need the guard to deal with a humanitarian crisis that we expect to escalate," Mayor Bowser said. "The number of people crossing the border seeking asylum we expect to only go up."

The mayor of Washington D.C. is asking for National Guard help to deal with an influx of asylum seekers who were bussed to the nation’s capital by the governors of Texas and Arizona.

"They cannot handle that one single challenge. We deal with that same number every single day. I got one thing to tell you and tell them – there are more buses on the way as we gather at this conference today," Abbott said while speaking at the Conservative Political Action Conference in Dallas this week.

Those making the trip are all volunteers.