DENVER - The U.S. has confirmed its first case of a new, likely more transmissible variant of the coronavirus first identified in the U.K.

On Tuesday, Colorado Gov. Jared Polis reported that state health officials discovered the first case of the COVID-19 variant B.1.1.7 in a man in his 20s.

"There is a lot we don’t know about this new COVID-19 variant, but scientists in the United Kingdom are warning the world that it is significantly more contagious. The health and safety of Coloradans is our top priority and we will closely monitor this case, as well as all COVID-19 indicators, very closely. We are working to prevent spread and contain the virus at all levels," said Polis in a tweeted statement.

British authorities are blaming the new variant of the coronavirus for soaring infection rates in London and southeast England. They say the new version is more easily transmitted than the original, but stress there is no evidence it makes people sicker.

In response, authorities have put a swath of England that’s home to 24 million people under restrictions that require nonessential shops to close, bar indoor socializing and allow restaurants and pubs only to operate for takeout.

Even so, hospital admissions for COVID-19 in southeast England are approaching or exceeding the levels seen at the first peak of the outbreak. Government figures show 21,286 people were hospitalized with the coronavirus across the U.K. on Dec. 22, the last day for which data is available. That is only slightly below the high of 21,683 COVID-19 patients who were recorded in U.K. hospitals on April 12.

On Tuesday, the United Arab Emirates detected the country’s first known cases of the B.1.1.7 variant of the coronavirus. The UAE’s National Emergency Crisis and Disaster Management Authority reported Tuesday it found "a limited number of cases received from abroad," without specifying how many or where the travelers had been.

Belgium, Ireland, Germany, France, Italy, and the Netherlands implemented restrictions for travel to and from the UK from Dec. 20, causing chaos at transit hubs just days before the Christmas holiday.

In response, neighboring Gulf countries halted international commercial flights. The UAE, with its large population of British expats, has remained open to tourists. Those arriving from the U.K. are required to get tested for the virus upon arrival in Dubai.

On Monday, Japan began barring entry of all nonresident foreign nationals as a precaution against the new virus strain. The Foreign Ministry says the entry ban will last through Jan. 31. 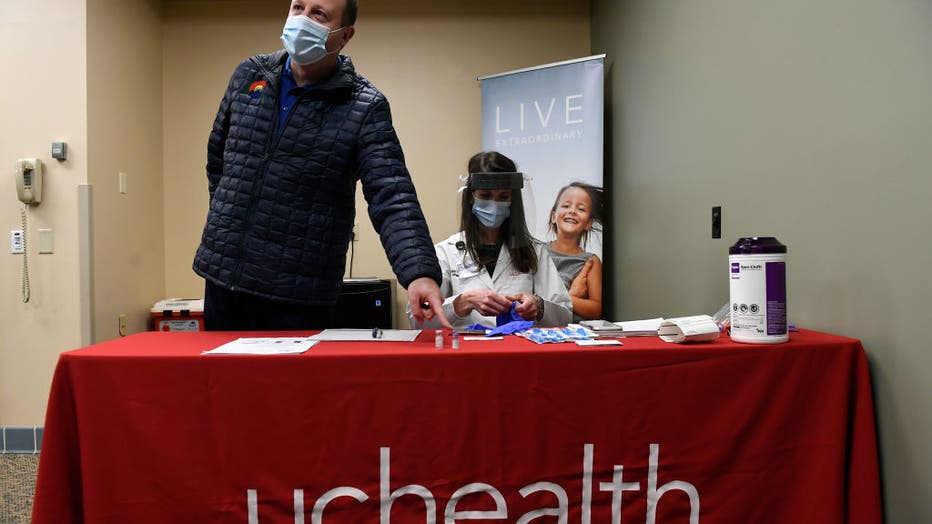 Colorado Governor Jared Polis, left, points to the Covid-19 vaccine in a small vial as he watches as Gina Harper, clinical coordinator with pharmacy, right, reconstitutes a dose of the Covid-19 vaccine before it is administered to the first patients (Photo by Helen H. Richardson/MediaNews Group/The Denver Post via Getty Images)

Last week, Japan banned nonresident foreigners coming from Britain and South Africa after confirming the new variant in seven people over two days — five from Britain who tested positive at airports and two others in Tokyo.

On Sunday, officials in Canada’s most populous province also identified confirmed cases of the contagious new form of COVID-19.

The province’s associate chief medical officer says that the cases are a couple from Durham Region, just east of Toronto, with no known travel history, exposure or high-risk contacts.

The coronavirus variant in the United Kingdom has caused global alarm because of the possibility that it might spread more easily. But experts say the COVID-19 vaccines being rolled out will likely still work on the variant.

Dr. Anthony Fauci, the top U.S. infectious disease expert, said data coming from Britain indicates the vaccines still will block the virus. But the U.S. also will do tests to be sure.

RELATED: Fauci, CDC say new COVID-19 strain accelerating spread in UK may already be in US

Fauci previously said that the new variant has most likely already been on U.S. soil even before being positively identified in Colorado.

"When you see something that is pretty prevalent in a place like the U.K. — there are also mutations that we’re seeing in South Africa — and given the travel throughout the world, I would not be surprised if it is already here," Fauci told PBS.

Viruses often undergo small changes as they reproduce and move through a population. In fact, the slight modifications are how scientists track the spread of a virus from one place to another.

But if a virus mutates significantly enough, one worry is that current vaccines might no longer offer as much protection. And although that's a possibility to watch for over time with the coronavirus, experts say they don't believe it will be the case with the variant in the U.K.

"My expectation is, this will not be a problem," said Moncef Slaoui, the chief science adviser for the U.S. government’s COVID-19 vaccine push.

Vaccine maker Pfizer-BioNTech told FOX Television Stations that its researchers are currently testing its vaccine, which was the first authorized for emergency use by the FDA, against the new strain of COVID-19. Researchers said they expected new strains of the virus and took that into account when developing the vaccine that’s now being distributed in the U.S.

"We don't know at the moment if our vaccine is also able to provide protection against this new variant," BionNTech's CEO Ugur Sahin said in a news conference the day after the vaccine was approved for use in the European Union. "But scientifically, it is highly likely that the immune response by this vaccine also can deal with the new virus variants."

Chris Williams and the Associated Press contributed to this story.