Trout action is getting better inshore -- which is weird

Trout action is getting better and better which is odd because most of the time they bite best when the water is cooler, but it seems they have woken up a bit with the warmer waters, says Captain Dylan Hubbard of Hubbard's Marina.

We have a first-quarter moon Friday that’s getting bigger through the coming week culminating in a full moon next Saturday.

This means lots of moving water will be with us, especially towards the end of the coming week. However, that front that came through yesterday with the rain will hang around through Sunday.

Unfortunately, it will stall out over us and hang around causing a very strong pressure ridge and bringing us plenty of wind through most of the weekend. Then, Sunday, a high pressure finally pushes it out of our area and then that high pressure lingers around until later in the week as another cold front pushes it out of the area.

This looks like another week of higher winds making it tough to get out deep, but there is some nicer afternoon periods towards the middle and end of the coming workweek and with the approaching full moon fish should be chewing!

Thursday looks like it will be the nicest day this coming week. Sunday through Wednesday won’t be as windy in the afternoon periods. However, seemingly another super windy weekend is being forecasted again next week with another approaching front. Try and make plans to fish as that front recedes prior to the next front right before that full moon. So, Thursdays the day to call out sick this week and go fishing!

Mackerel have really flooded the area, especially around the mouth of Tampa Bay and some of our local passes when the bait is present. Also, deeper edges of local flats where water is moving is a good place to find them too.

The faster-moving, flashy lures are always best, like a casting spoon or, my favorite, a gotcha plug. Look for birds while out on the water and areas where whitebait is congregated near deeper moving water. Oftentimes, where mackerel are thick, they will push the bait up to the surface making it easy to spot their locations.

Local fishing piers have been great places for mackerel like the Skyway Fishing Pier, Gulf Pier at Fort De Soto, Pier 60 in Clearwater, Anna Maria P, and the Cortez Fishing Pier. Here’s a link to find all our local fishing piers thanks to the Tampa Bay Estuary program with links to find them.

Snook action has been going well with plentiful fish moving around the bay that are starting to show up in local passes. The younger juvenile snook are really active around the flats right now, especially around those areas where they can stage an ambush passing baits. 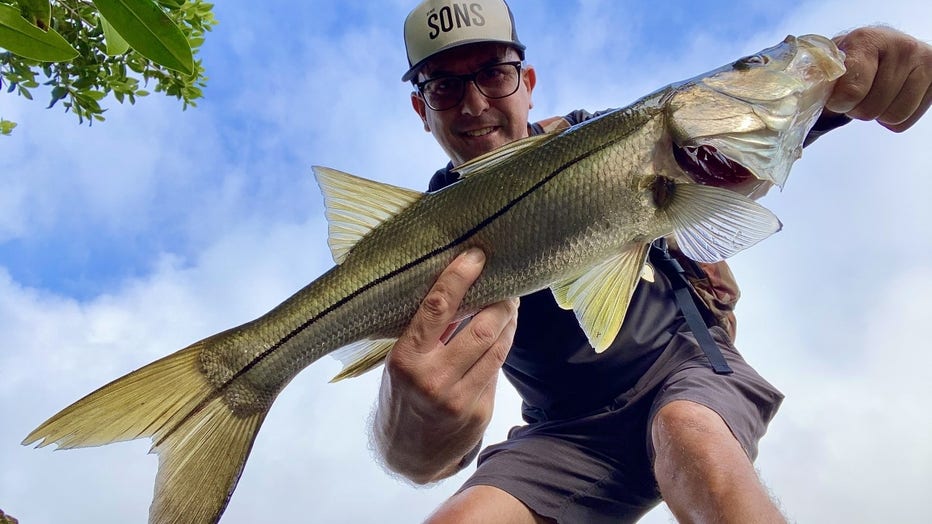 Look for the cuts, pockets, edges, or points adjacent to the flats to find them grouped up and ready to eat. Soft plastic paddle tails, MirrOlure MirrOdines, or DOA shrimp are some great artificial options to target snook. However, the live whitebait are really working well. You can still use shrimp too, but they are more focused on the whitebait or pinfish now that the water is warmed up and there is more of that present around the flats.

Redfish action is going well around the local grass flats, mangrove shorelines, and oyster bars. There are still some fish hanging around those docks that border the areas listed first too. These guys are all about the artificial shrimp like the DOA shrimp or paddle tail soft plastics, but you can get them on hard baits like the MirrOdine too. Look for them on the shallower flats and often times they are going to be more easily spooked so longer casts further from the boat are key. 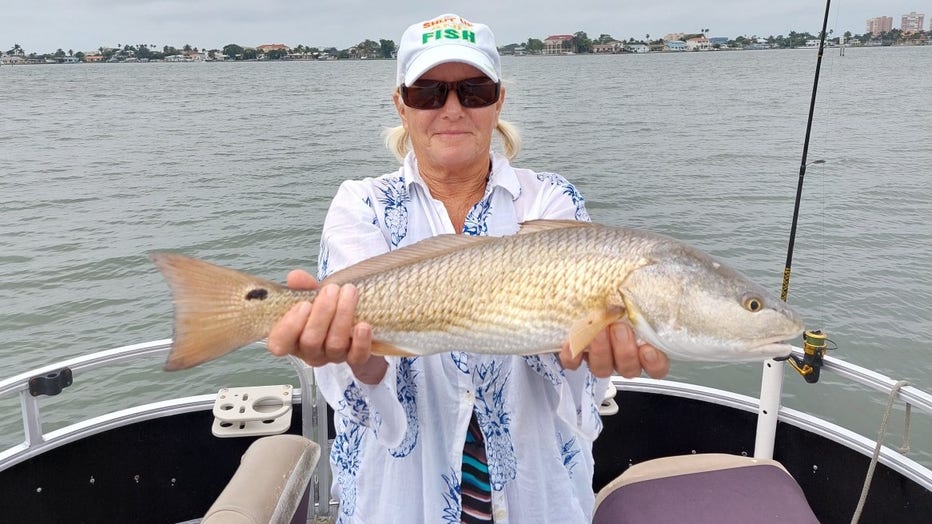 Trout action is getting better and better which is odd because most of the time they bite best when the water is cooler, but it seems they have woken up a bit with the warmer waters.

These guys love the little cuts of the flats, edges, or potholes, and they will often be in groups so where you find one there are often a few more. Soft plastics are a great option for trout or free-lined whitebait. 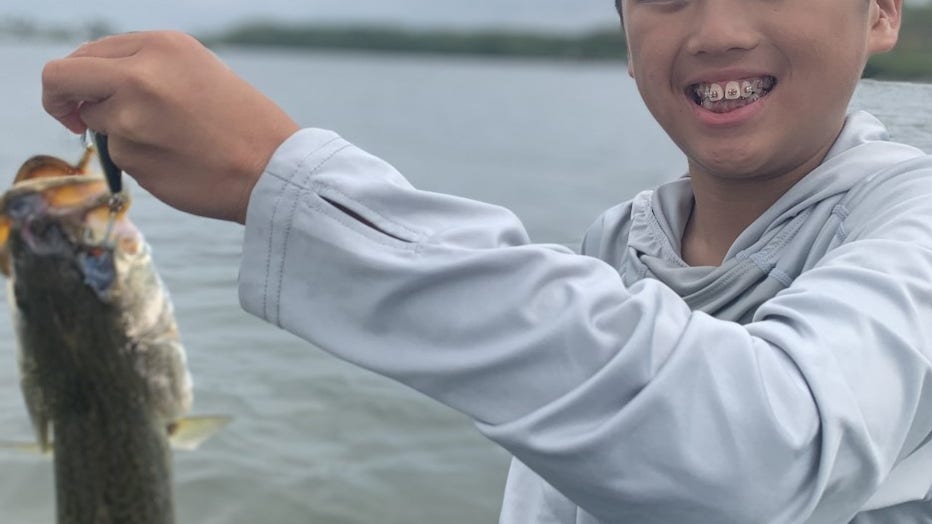 Pompano are getting better and better around local passes and along our beaches too. You can find them around sandy edges in the bay too, but most of the time the local passes are good areas to look at. Also, the fishing piers along the beaches work well to give you a shot of a pompano. Earlier in the morning is best when it’s calm and the water is clear.

Also, this coming week’s windy mornings will make it harder to target them as they like clearer calmer waters, but it’s an east wind most of the week, so the beaches should still be clear enough to target them in the troughs that run parallel to the shoreline.

This often makes it harder to target those hogfish that are more leader shy and don’t like the stirred up murkier waters we get near shore when the weather is blowing. We haven’t seen a ton of hogfish this past week due to that, but we are still getting them when weather allows. 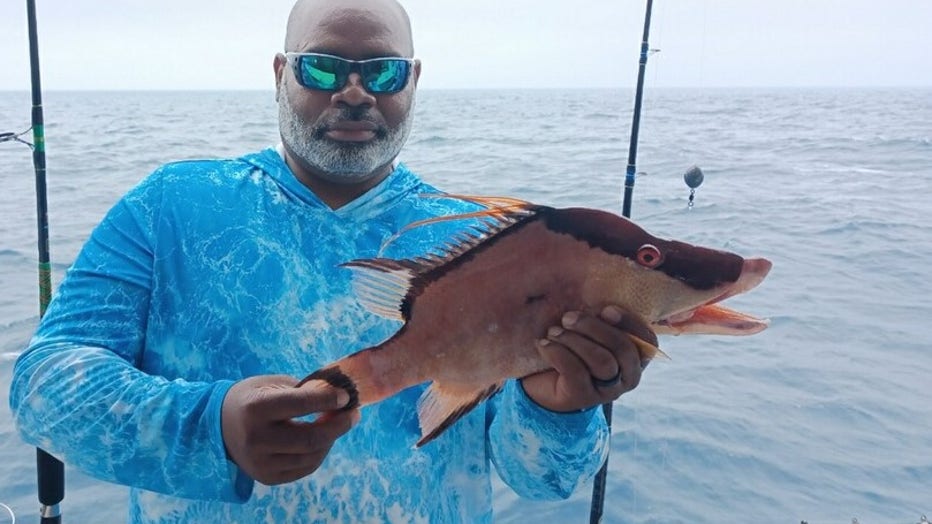 Lane snapper have been biting well for us near shore when we are able to get out to that 60 to 100-foot area. They like a little deeper water right now and there has been a pretty steady flow of mangrove snapper mixed in with the lanes especially as you move deeper. Light tackle and live shrimp or cut chunks of threadfin work well for both of these good-eating snapper species.

Mackerel and kingfish are thick right now near shore and that’s been the big news lately near shore inside 100 feet of water. We are getting a half dozen to a dozen of the mackerel trolling on the way out and back on our big party boats on our 5-hour half day. Our 10-hours move a little fast to troll, but we do get the option once out there to flatline for the kingfish, and we fish a little deeper than the half-day, so we get a chance at some nice kingfish. 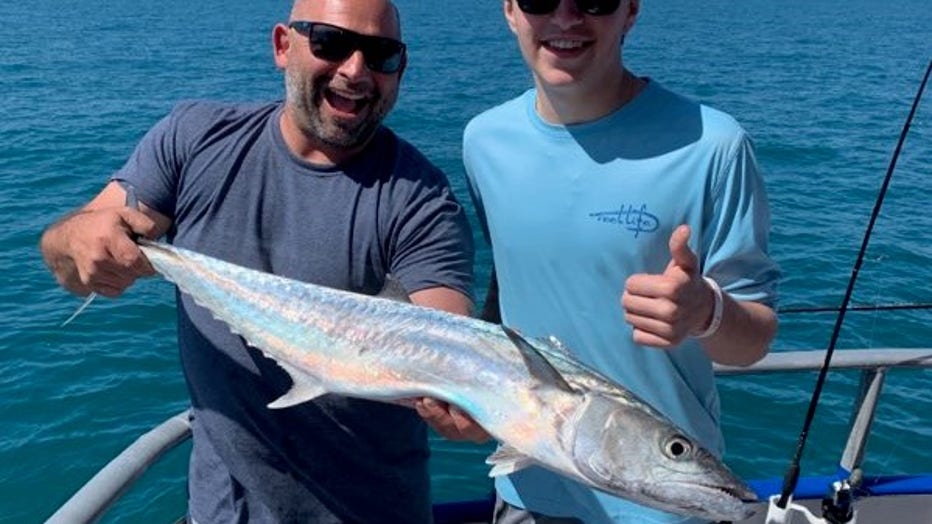 Flat lines are out when weather allows on both these trips and every boat we have near shore this time of year. Often, at the start of the trip, we will just rig up the flat line with a dead threadfin but as bait comes up. Then, switch that out with a blue runner or even a spot tail.

Using around number three or four-wire works best for the kingfish, and we use the three when water is clearer and four when it's murkier. Don’t forget, we have the videos on our fishing trips and tricks page to rig the kingfish rig for your flat line rod. Also, it’s a good idea to bring some biodegradable balloons for the flat line too because when the current isn’t moving much the balloon works to get that out and away from the boat.

Red grouper are present out there in the deeper near shore waters, but we aren’t seeing a ton of them. We are catching most of our red grouper out deeper offshore. Now that the deep-water closure is over, we are targeting them in 140 to 180 feet of water primarily.

Well, we have been pretty much regulated to near shore fishing due to weather lately. It’s been really tough to find a good weather window to make it out deep offshore.

However, last weekend we pushed through the weather and our 39-hour did extremely well fishing around 120 feet up to around 180 feet of water. The mangrove snapper bite was a little softer than we would have liked but that had more to do with the weather than anything.

When the boat is bouncing in 6-8 feet seas, it makes it tough to hold the bottom and present your bait in the right manner, nice and still to get the mangrove snapper chewing. However, some nice ones were caught using that double snell rig and dead-cut threadfin.

We see some big mangroves come up on the small to medium-sized pinfish too. Luckily, while the mangrove action was soft, we did get into some really nice numbers of some solid yellowtail snapper. These guys love the cut threadfin or small strips of cut squid wing. We also saw solid numbers of porgies and bigger vermillion snapper too!

Red grouper action wasn’t as nuts as we thought it would be after the two-month-long deepwater closure, but we did get some really nice ones and ended up with about two dozen. They were loving the live pinfish or the whole threadfin on 60lb leader with around 7-8ot hooks. You don’t have to use super heavy tackle with the red grouper as they won’t be as likely to rock you up and break you off as the gag grouper do. 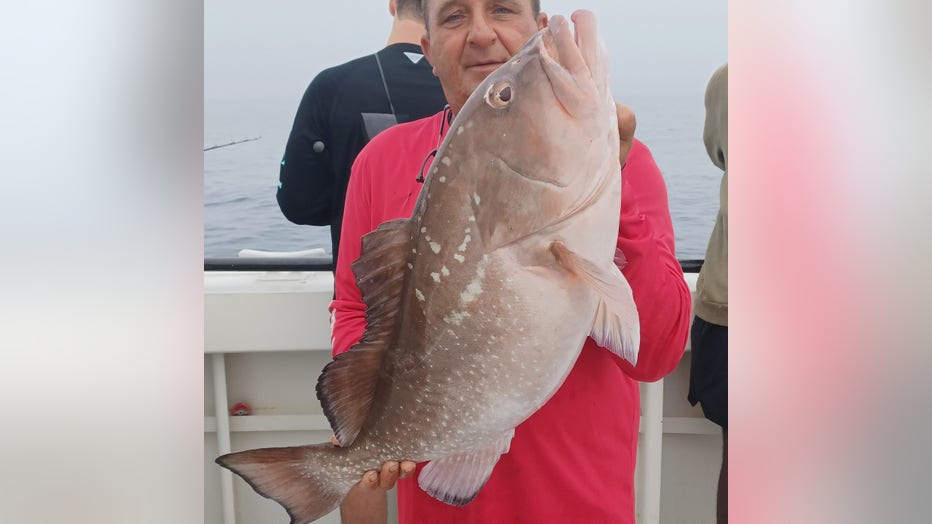 The pelagic action was on fire this last weekend on the 39-hour. We had solid kingfish and mackerel for the ride out and then, once offshore, the big kingfish showed up and we got some really nice blackfin tuna.

They were so thick, we were catching pelagics while dropping live baits to the bottom and retrieving snapper from the bottom! We even caught a 45-pound kingfish while reeling in a vermillion snapper.