The red tide issues we are seeing pervasively inshore are not affecting our near shore and offshore fishery in the short term, reports Captain Dylan Hubbard of Hubbard’s Marina.

**Editor's note: This report was published just before FWC announced catch-and-release restrictions in Tampa Bay for snook, redfish, and spotted seatrout. It went into effective immediately and will continue through September 16.

Red tide is definitely impacting our fisheries in a great, great way. We're seeing a super-concentrated red tide bloom inside Tampa Bay, especially around the southern edge of Pinellas County. That super concentrated section that was kind of focused on the south shore of Tampa Bay, Elsa came up and blew that southwest wind and took a lot of that right to and around downtown St. Pete, all around to Fort De Soto Park.

Plus, we're seeing it kill seagrass beds. We're seeing it take out a lot of our structures in the estuary, which is home to primarily the entire food chain at the beginning of their life stages. So we have a really drastic event going on right now that we're going to see far-reaching effects on. There's talk among the FWC right now potentially closing some species again in an emergency executive order to protect a lot of these species being impacted. 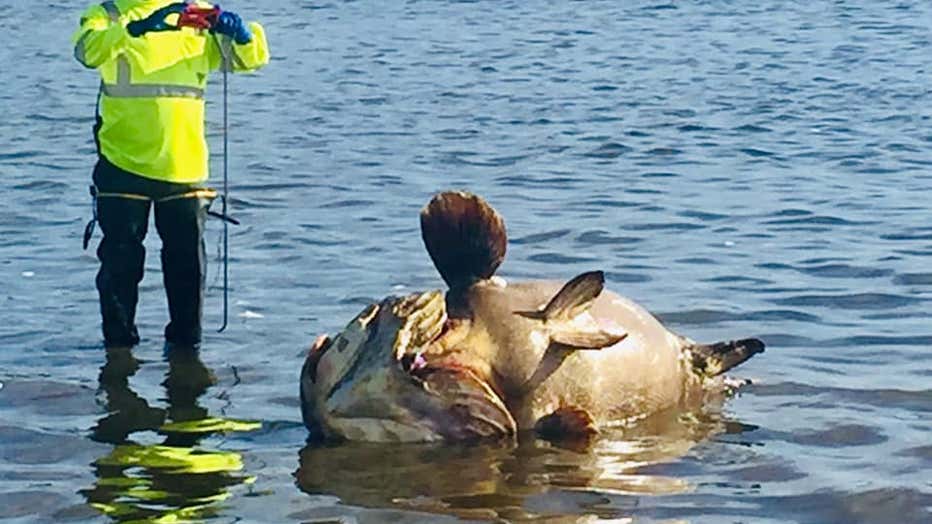 Basically, we have all these different factors at play with the pollutants, the salinity level, and then that organism was present due to that west wind prior to Elsa and then Elsa came through like a big wooden spoon and mixed up Tampa Bay. All those ingredients mixed together and exploded into the situation we have now.

Right now at least, it's concentrated around the bay and the back bay areas. So on a hard, inbound tide, we get an influx of some really clean Gulf water. This stuff doesn't really protrude far into the Gulf so as that incoming tide comes in, the water cleans up.

The fishing around John's Pass, Clearwater Pass, Pass-a-Grille has actually been fairly decent on a hard, inbound tide, especially up to the north – once you're north of the Honeymoon Island area. 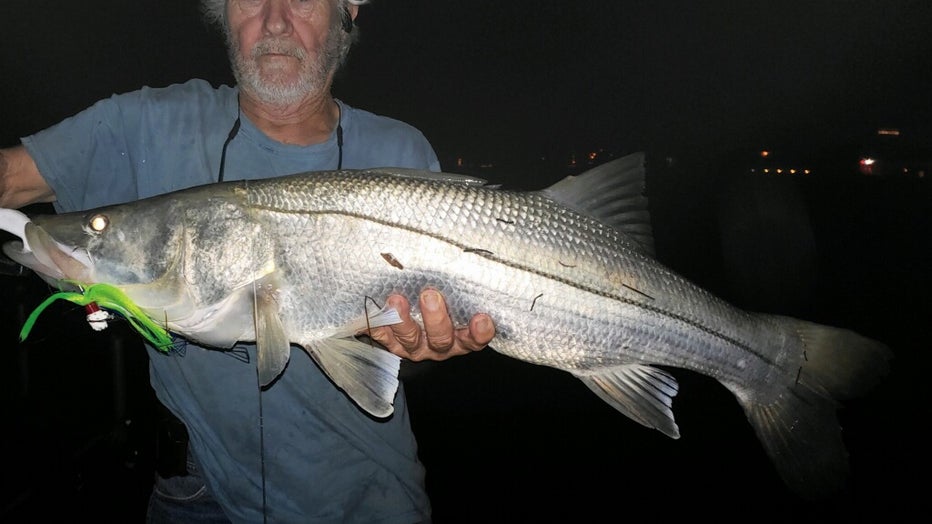 Prior to Friday, inside John's Pass and north, we've been seeing some nice snook, redfish, trout and even some pompano caught on those hard, inbound tides, but FWC has since announced catch-and-release measures for snook redfish and spotted seatrout in Tampa Bay.

Luckily, the red tide issues we are seeing pervasively inshore are not affecting our near shore and offshore fishery in the short term. However, what concerns me for the future for our fisheries in the central west coast region.

These large-scale fish kills may take a big effect on future recruitment classes of these near shore and offshore species like gag grouper, mangrove snapper, lane snapper, red grouper, and many other species that start their juvenile life cycle and development inshore in the estuaries.

I’m hoping we don’t see a downward trend near shore and offshore moving forward due to these large-scale events plaguing adjacent fisheries. 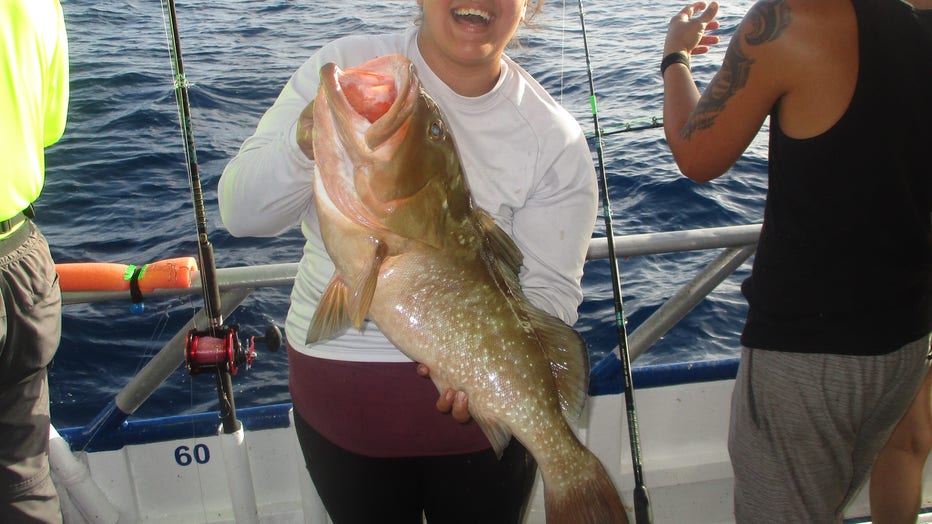 Hogfish action is virtually nonexistent at this time, but we are seeing them randomly from time to time in the near shore areas. Pelagic wise there is not much to speak of near shore but there are still sparsely populated mackerel along the beaches out to around 60 feet of water.

Offshore is the focus still as we are in the depths of red snapper season taking advantage of this short season and great bite. However, the weather has been a little tricky with hurricanes and such making it tough to get out deep. When we can, the fishing has been outstanding overall. 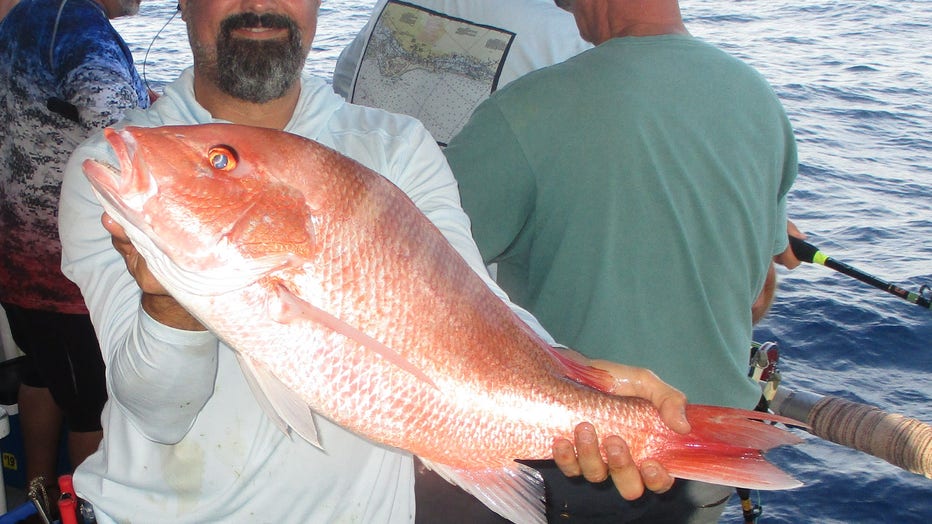 Red snapper concentrations haven’t been incredible but were finding a slow and steady bite of these highly sought-after fish in a very large average size anywhere from around 160-200 feet of water. We do see them as shallow as around 100-120 feet of water but if you want to find more steady action you must start closer to around 140 feet of water and the deeper you go the better the action seems to be.

The best bait lately seems to be the larger more oily and smelly cut dead baits like the whole squid, Bonita strips, or the octopus. We are still seeing plenty on the big threadfins and sardines too.

Gag grouper action remains strong despite our inability to get live bait out there on most recent trips. Since the backside of Elsa moved through, it helps the red tide food to stir up and those organisms thrived. Most of the big gags we have seen lately have been on the white grunts we catch on our near shore during the 5-hour half days. Those guys are going back on a 39-hour to drop down or use the big live baits to fool those big gag grouper. 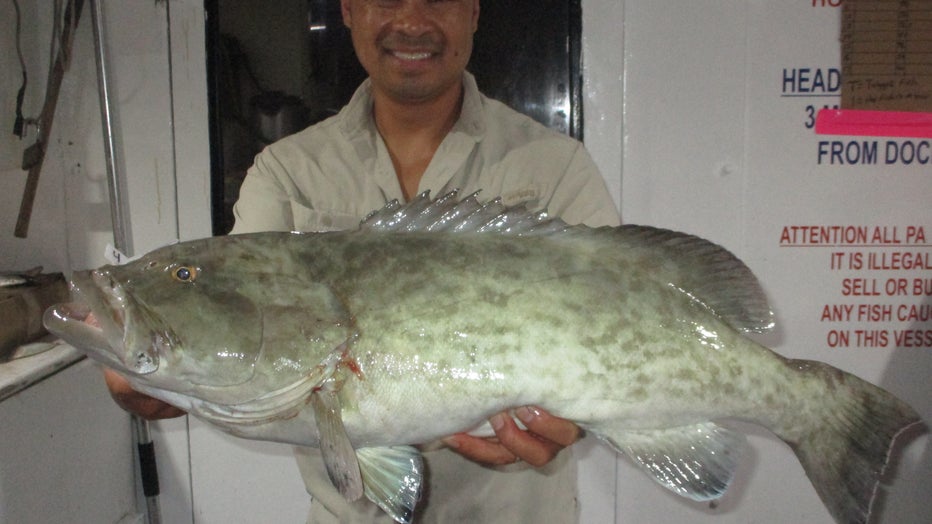 Minimally, you need around 80lb test when fishing out deeper for gag grouper offshore but if I was dropping a big bait down on a 100lb leader, I would want to have a reel with at least 40-45lbs of drag. Also, keep in mind your hook size needs to carry with your size of bait. If you plan on using a 3lb bait you need some 125lb tests and then make sure we have conventional rods to get out there deep and hunt some bigger gags and red snapper.

Pelagic action has been fired up offshore. We are seeing right now some big mahi mahi in the bull dolphin range. Plus, occasionally, some wahoo and tuna join the fun.