Windy conditions have stirred up a lot of the inshore waters lately and really have the fish moving around. Warmer waters also have many fish on the move and more actively feeding, says Captain Dylan Hubbard of Hubbard's Marina.

Today, we are on the last quarter moon moving into a new moon a week from Friday.

We have some smaller fronts moving through the area over the weekend causing some confused weather and moderate winds but overall, a cooler, drier and somewhat fishable weather.

However, early this coming week we have a high pressure that is moving in, which starts to set up a buffer to allow us to miss the next front. This will finally opens up a little bit of a weather window for us at the start of the coming week.

This weather window is then followed by an extraordinarily strong south wind as a large front pushes down. The south wind will feed it plenty of energy and creates what looks to be a pretty nautical front that will be smashing our area sometime Saturday coming up.

It looks like that stronger south wind will prevail our area Wednesday through Saturday before the prefrontal activity begins sometime mid to late day Saturday.

Windy conditions have stirred up a lot of the inshore waters lately and really have the fish moving around.

Warmer waters also have fish on the move and more actively feeding. We are definitely in the midst of that mixing period where we still see plenty of that cooler water action still happening and the later spring and summertime patterns starting to set up as well. Bait is really starting to get increasingly prolific and more size as well.

Sheepshead are still extremely thick and aggressive around almost any structure, but we will start to see that recede more as water temperatures continue to trend upward. 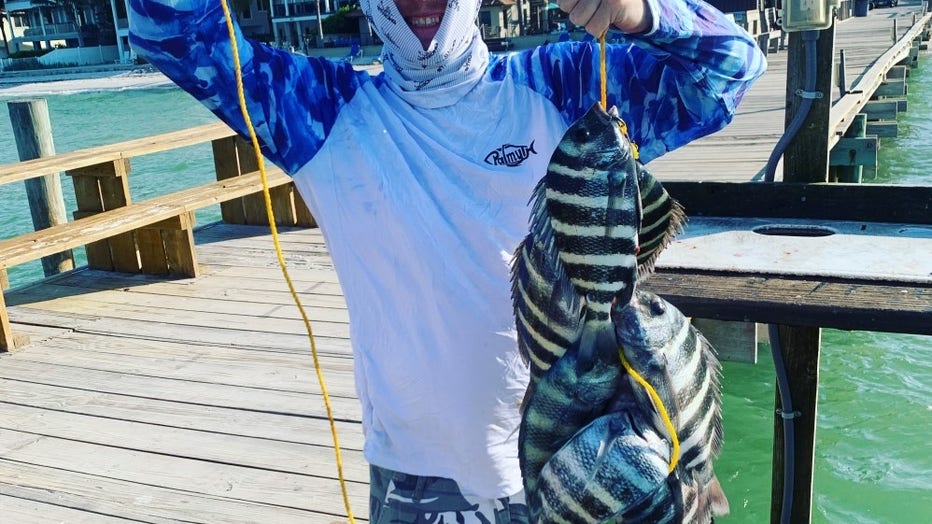 These cold fronts are helping to extend that period more, but they are close to making a move back into the backwaters for the summer spread out. Lately, the fiddler crabs, barnacles, and oysters have been king but live shrimp still working well too.

Snook are pouring out of the back bay areas and are extremely active around the flats lately. Plus, some already returning to the passes and around those docks, islands, points, and areas on the way to the passes. 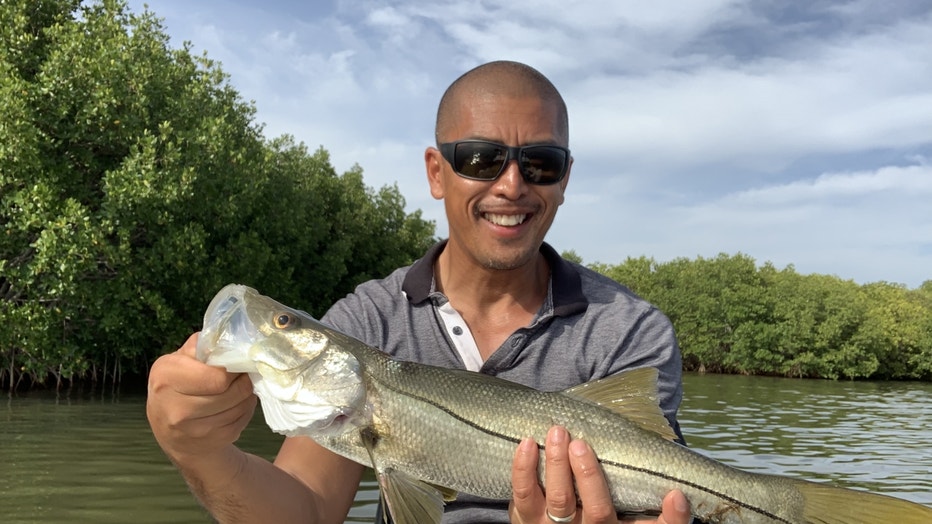 Dock lines and especially dock lights will be great this upcoming week with the new moon. When the moon gets smaller or totally absent, the nighttime action around dock lights picks up even more -- especially for the snook.

However, keep in mind that you have to be extremely quiet and courteous while fishing behind people’s homes and properties. Often, if you make your presence known, lights will be shut off and more homeowners will just remove them or keep them off with disrespectful people ruining it for everyone.

During the day, target the snook around the flats, mangroves, oyster bars, or around the local bridges, docks, and passes. We have started to see more along the beaches and this upcoming week with the extremely warm weather we could really see numbers increase in the passes and on the beaches, especially with the new moon tides.

Redfish are extremely active around the area right now, like the snook. However, you have to work a little harder to find those pockets of fish. We are seeing a few at night around the dock lights. 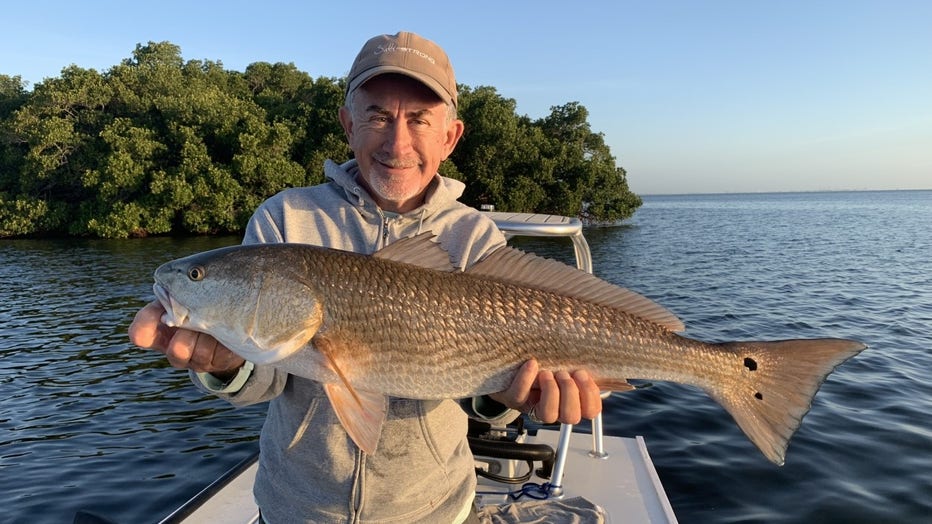 Just like snook, this upcoming week will be an even better option. During the day, mangrove shorelines, grass flats, and around local dock lines adjacent to these areas will be a good place to look for the redfish. They are loving the whitebait, soft plastic paddle tails, and that early morning or dusk topwater action.

Remember, if you spot a school of big mullet there is likely a few nice redfish around it or mixed in, eating whatever crustaceans are spooked up by the foraging mullet.

Pompano jigs around the tips of local jetties, fishing piers, and casting parallel to the beaches around a 45 to 60-degree angle from the beach is a suitable place to try and find some of these great eating fish.

Trout action is going well through the area, and we are seeing numbers pick up in areas where the concentrations were weaker than expected through the cooler months. 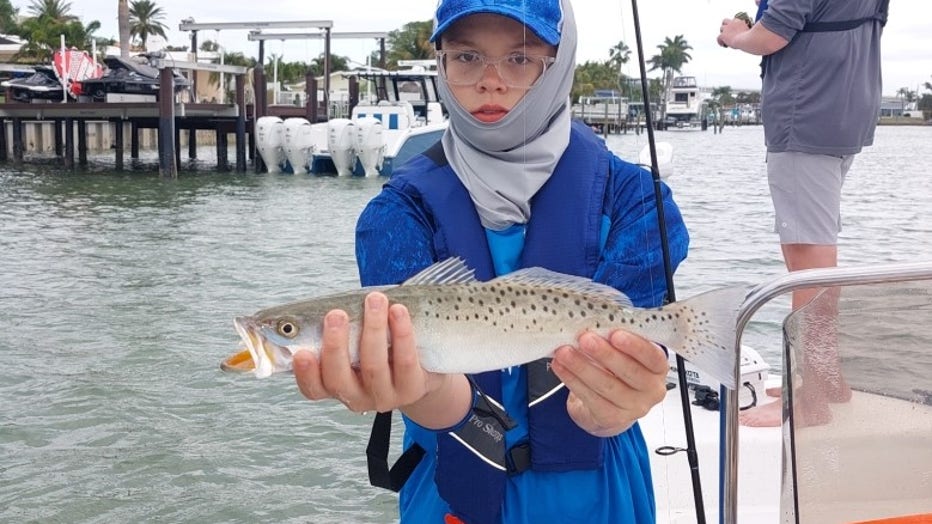 Lately, they are starting to move a little deeper as the water warms. We are still seeing them around the dock lines, edges of the shallower flats, or in those potholes or cuts. Also, they’re more spread out around those 2 to 4 feet deep grass flats hunting after shrimp, whitebait, soft plastics, and that imitation shrimp.

DOA shrimp are some of my favorite lures to target trout, but remember, if you think you are working it slow enough, slow down even more. When you are working a lure that mimics a slow-moving shrimp, you have to remember to retrieve that bait even more slowly.

Black drum are still highly active around the area structures, piers, jetties, bridges, and dock lines. We’re seeing quite a few being caught around John’s Pass and areas like it. 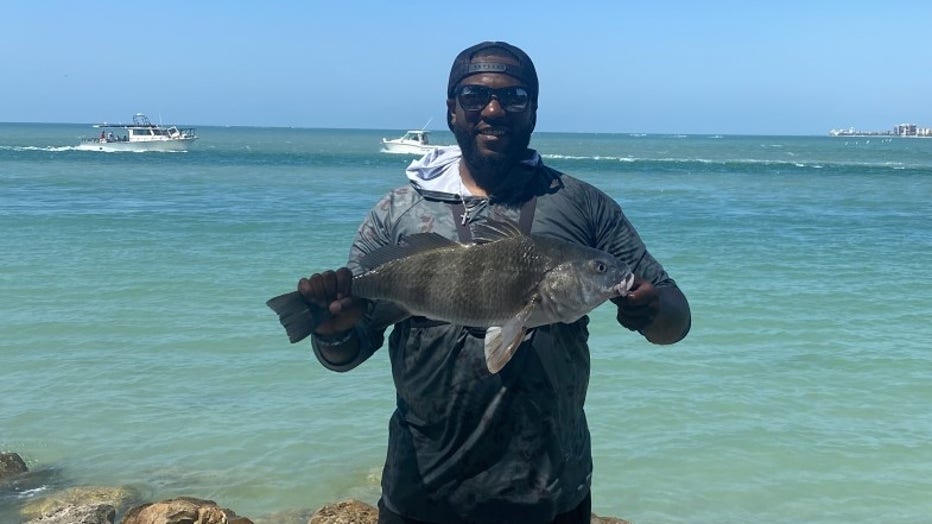 Look for them right on the bottom with live or even dead shrimp. Crabs are also a great option for the black drum especially if you are after a larger one. You can even use half a crab soaked on the bottom at the base of almost any local bridge to find yourself a big black drum.

Jack crevalle are still very heavy through the area, and we’re still seeing the occasional big school of these guys moving through local flats, canals, and bays. 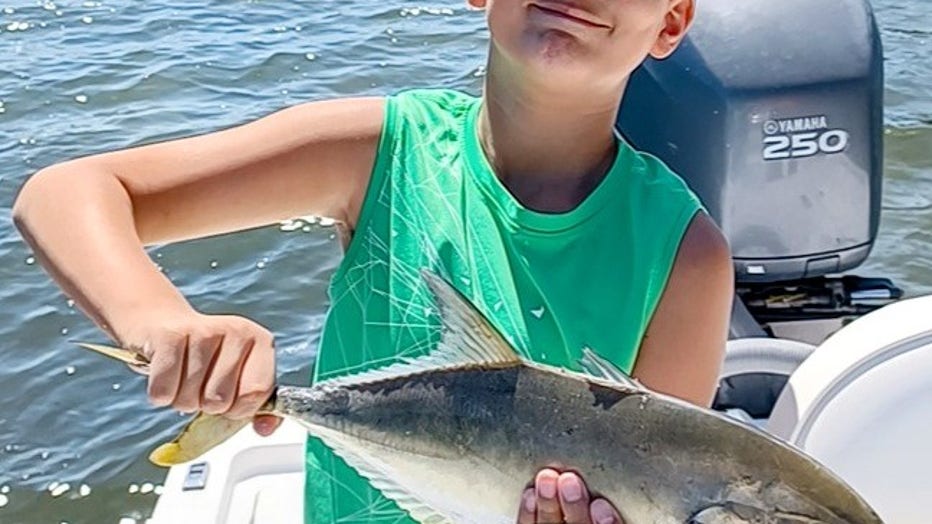 If you see a bunch of bird action around the back bay area, oftentimes it is because these guys have the bait balled up, and they are working them at the surface. They will bite about anything moving quickly through the water, especially if it is a shinier lure.

This past week has been a tough run of weather, making it tricky to even get near shore to do some fishing. However, we got a few attempts in and we saw much of the same patterns, and it seems like we should get a good shot at this early in the coming week with this little weather window.

We’re looking forward to getting out Monday and Tuesday to capitalize on the opportunity.

Hogfish action is still going well, but it’s overall a little slower than it was in the cooler months. We are still seeing a few on our half-days and more on the all-days. 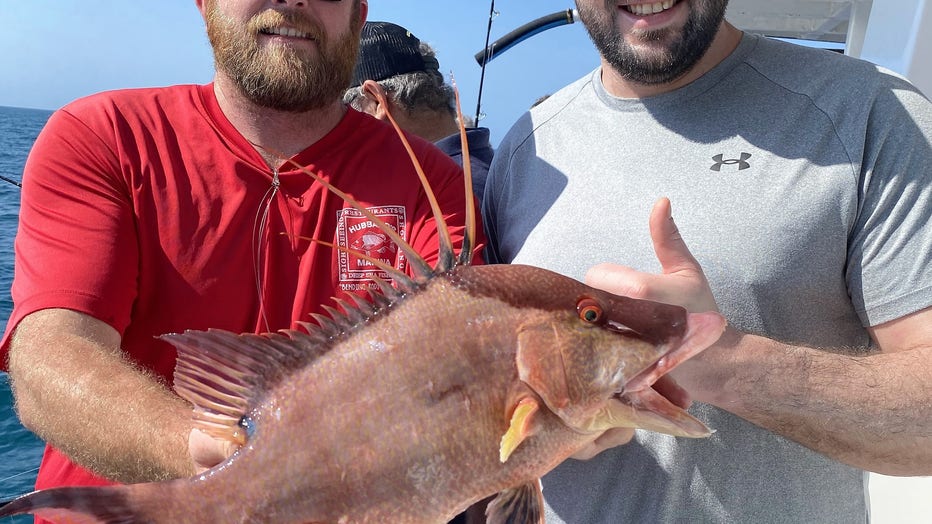 We do catch them all year, but once the waters warm, they become even more leader shy and trickier to get chewing. Your best chances for them remain a little deeper around that 40 to the 90-foot area. Light tackle around 30lb and lighter weight around 1-2oz and a hook about 3-4ot is still the go-to option to have the best chance for a hogfish.

Fishing those smaller ledges, potholes, cuts, or flat hard bottom areas adjacent to the bigger structures are still the best areas to look at as well.

Lane snapper action has been going well for us in the deeper near shore waters closer to around 80 to 100 feet of water. We are seeing some nice-sized mangrove snapper mixed in around these depths too.

Using that smaller chunk of cut threadfin on a double snell rig is a great option for these guys. Also, we see them come up often while targeting the hogfish too on that knocker rig set up with live shrimp.

Red grouper has been tricky to find in any concentration near shore. While we are seeing quite a few, most are the smaller under-keeper-sized fish. The big keeper red grouper is deeper and are more in those offshore waters deeper than 100 feet.

Mackerel and a few kingfish are definitely getting increasingly prolific in our near shore waters along the beaches and throughout the near shore area.

We are finding more bait and more of this fun to catch fish too. It is getting to be the right water temperatures where they should really start to get thicker near shore too.

Hoping we do not warm up too fast and miss a chance at a longer spring run. However, these cold fronts barraging the area seem to want to help us keep the mackerel and kingfish around longer.

It has been extremely difficult to get offshore as of late with the higher winds and higher seas. However, we were able to sneak out there this past weekend on a 39-hour and capitalize on the great bite.

We had to cancel our mid-week 39-hour this past week due to the weather, unfortunately, as we were excited to get back out there to the fish.

This past weekend’s 39-hour saw a huge increase in the number of yellowtail snapper. One or two spots were loaded down with prolific yellowtails, which was a terrific addition to the large and plentiful mangrove snapper action we have been seeing offshore too.

It’s a really exciting time to get out there to the big snapper when the weather allows. Along with the mangroves and yellowtail big vermillion have been active and the porgies too.

It should be a wonderful opportunity early this coming week to run offshore to get you some big snapper that will be very hungry during that short weather window.

Red grouper action has been steady out deeper around that 120-foot mark just inside the fence of the ‘deep water closure’ area. Remember, we are still unable to keep any shallow water grouper beyond twenty fathoms or 120 feet of water until after the end of March. 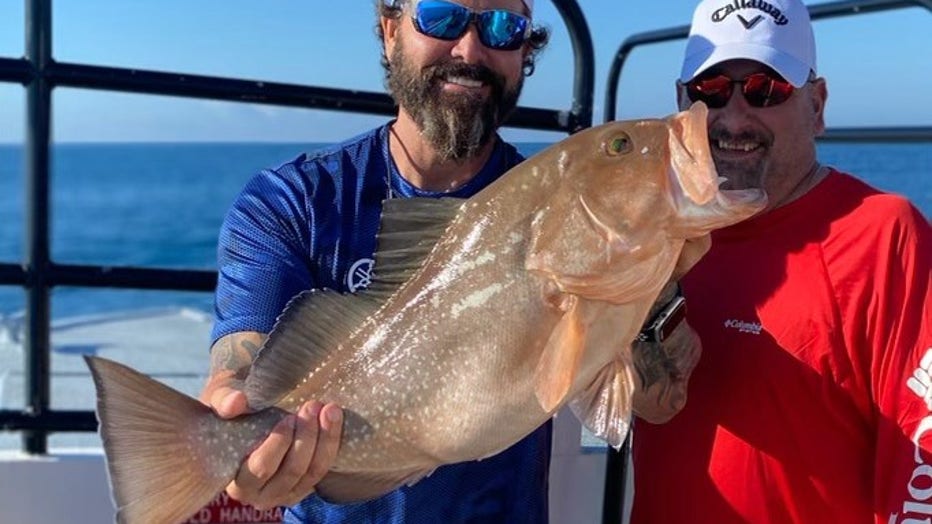 Once April 1st rolls around, we will once again be able to roll deeper and keep the red grouper, scamp grouper, and strawberries! However, for now this upcoming week we will be focused on the shallower waters and trying to grind it out to catch good numbers of red grouper. Oftentimes, a few here, few there, and a few on the next one.

Pelagic action is going EXTREMELY well offshore for us right now. This last overnight trip had prolific kingfish action around the boat through the night and during the day the bigger ones came out to play especially around the sunrise period.

Also, we saw some big blackfin tuna too on the trollers and the flat lines.