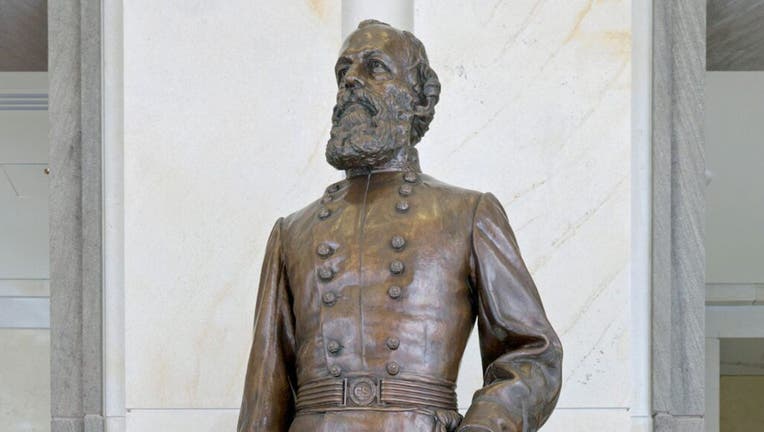 The statue of Gen. Edmund Kirby Smith in Washington, D.C. (Architect of the Capitol)

TAVARES, Fla. - A Florida county’s commissioners voted in favor Tuesday of protesting a decision made by a state committee last year for it to become the new home of a Confederate general statue that currently is on display in Washington, D.C.

The 9-foot-tall bronze monument honoring Gen. Edmund Kirby Smith, who was born in Florida and became the last surviving full general of either army during the Civil War, is standing today at the National Statuary Hall.

Yet now, with the Smith statue to be replaced there by Florida African-American educator and civil rights leader Mary McCleod Bethune, officials in Lake County – by a 4-1 vote – are asking Florida Gov. Ron DeSantis to select a different county to claim the Confederate monument, according to Reuters.

“This decision will bring our community together,” Leslie Campione, the commission’s chair, told Reuters following the vote. “This is the right decision.”

Campione earlier sent a copy of a draft letter to DeSantis to Reuters stating Lake County no longer wants the Smith statue because the general – who also was a member of the Ku Klux Klan – was born 100 miles away from its seat of Tavares. The 2019 decision also sparked “division and strife in our community,” the letter adds.

“The Gen. Smith statue is not currently located in the Lake County, nor has it ever been located in Lake County,” Campione told the Florida Politics website in mid-June. “The statue is owned by the state of Florida. A state committee selected our historical society’s small museum in the Lake County Historic Courthouse in Tavares to display this statue in its war gallery upon its removal from the U.S. Capitol Building.”

“Unfortunately, the process did not include consideration of other museums that would have had a more direct connection to Edmund Kirby Smith, nor did it take into account the tragic history of the Lake County Historic Courthouse,” she added.

The county says the building was the site of the 1949 Groveland Four criminal case, in which a group of young Black men was “wrongfully accused” of raping a white woman.

Despite Lake County commissioners opposing the Smith statue, the officials last year voted 3-2 to endorse the monument’s relocation alongside a request for the historical society to include context about the beliefs of the Confederacy, according to Florida Politics.

The Smith statue, meanwhile, is one of a dozen honoring Confederate figures at the National Statuary Hall, where each U.S. state – by law – can place two entries in the collection, the Associated Press reports.