FORT LAUDERDALE, Fla. - A Florida man says he was kicked off a United Airlines flight Wednesday for wearing women’s underwear as a COVID-19 face mask.

Adam Jenne, of Cape Coral, told FOX Business he wanted to make a point about what he regarded as the silliness of people having to wear masks on planes. He said he has been wearing women's underwear to highlight the absurdity of masks since last summer.

Cell phone footage recorded by Jenne's girlfriend shows a flight attendant telling him he is not in compliance with the airline's mask rules and must leave the flight.

In the footage, Jenne is seen wearing a "Let’s Go Brandon" T-shirt with bright red underwear hanging from his face. Several other passengers left the flight in solidarity with Jenne.

Jenne told FOX Business he later received an email from United telling him he was banned from all future flights until his case had been reviewed by the Passenger Incident Review Committee. 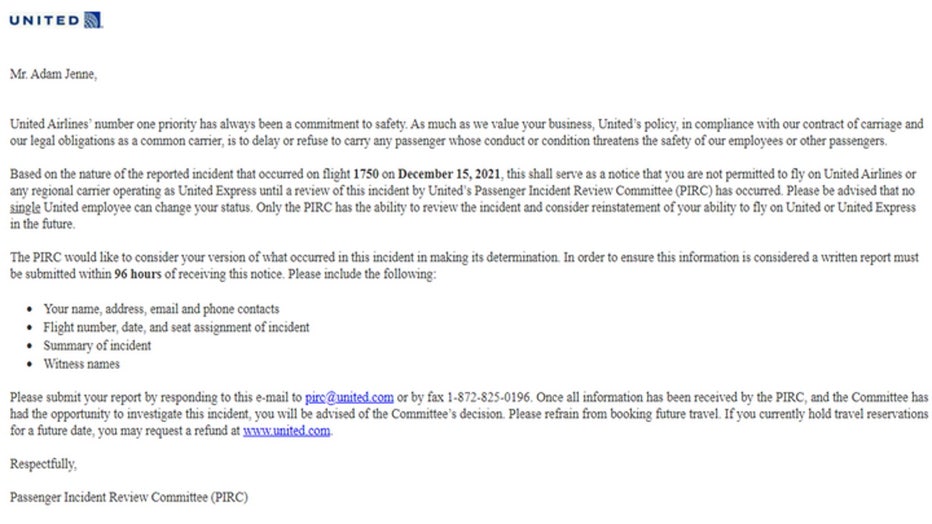 But Jenne insists that most airport staff and flight attendants, while tired of encounters with unruly passengers, actually get a kick out of his gimmick.

"The flight attendants are tired. They're tired of the bizarre confrontation that they have with people who are threatening and demeaning. They're worn out over this stuff," Jenne said. "But everybody that I encounter – almost 100% – finds the entire thing hysterical."

The Transportation Security Administration has extended the face mask requirement for individuals across all transportation networks throughout the U.S. – including on airplanes – through March 18, 2022.

SOUTHWEST CEO: ‘MASKS DON’T ADD MUCH, IF ANYTHING' AGAINST COVID-19 ON PLANES

In compliance with federal law, United requires all travelers, ages 2 and older, to wear a face mask with no vents or openings that fully cover their nose and mouth. Travelers must wear masks in the airport, during their entire flight, and in between bites and sips if travelers are eating or drinking.

United says travelers who refuse to comply with its mask rules may be refused transport, subject to fines and lose travel privileges on future United flights. 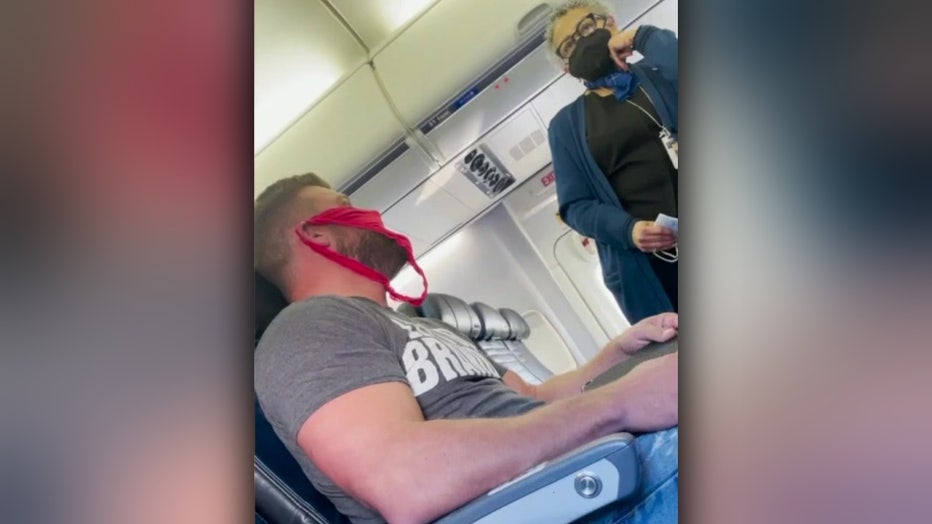 In a statement to FOX Business, United said the customer "clearly wasn’t in compliance with the federal mask mandate."

"[W]e appreciate that our team addressed the issue on the ground prior to takeoff, avoiding any potential disruptions on the air," United said.

Cape Coral's FOX 4 was the first to report on this story.