Florida could be solution to shipping woes

TAMPA, Fla. - A traffic jam of cargo vessels in the Pacific Ocean is causing shortages that could impact deliveries to the United States for the holiday season. Already, it’s caused a delay in everyday items at grocery stores and retail shops.

But the Sunshine State thinks it can solve California’s shipping slowdown.

This week, the Florida Ports Council tweeted, "Don’t let the cargo shipping logjam in California be the Grinch that stole Christmas… save time and money by choosing Florida shipping lanes."

"We think we can provide right now, certainly with a better, faster, and cheaper way to move product through several areas of the United States," the council’s CEO Michael Rubin said. "California ports just don’t have the capacity to bring it all in. It’s going to sit off the coast for weeks to a month, and then get loaded and be stuck port-side as well."

The view above Port Tampa Bay

It's a huge part of the area's economy, but few people really appreciate all that goes on at Port Tampa Bay. Here’s a view of the port that few have seen before.

If the route shifts, the vessels would travel from the Los Angeles port through the Panama Canal to Florida. Rubin explains how long it would take.

"It’s really about seven days, give or take any storms that are out there. It’s about a seven-day trip," he said.

Of Florida’s 15 ports, those vessels could end up in Tampa, Miami, the Everglades, or Jacksonville. From there, it would take about two to three days to bring the products to market. 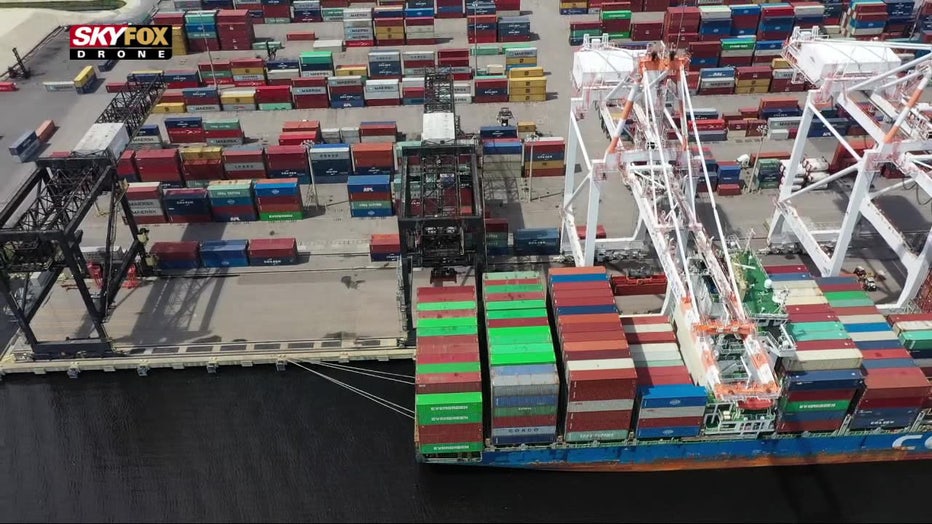 "There’s some great connections to rail lines at Miami, Everglades and Jacksonville," Rubin said. "You can put it onto those, move it into a rail line and up to anywhere really. Two days gets you probably to the Chicago area."

And he says the ports in Tampa and Manatee have the infrastructure to take it on.

"Tampa and Manatee are doing a significant amount of containers, they do a lot of domestic and trade routes," he said. "Both of those ports have the ability to put those containers on a rail or a truck."

In a statement, the Port of Tampa Bay said the port, "is not seeing any congestion or delays that have been creating issues for the other ports. Our port stands ready to welcome new business and serve as a supply chain alternative and solution."

Over the last several years, the port has been building out its infrastructure with the establishment of its master plan that will eventually feature a container terminal that spans 160 acres.

Rubin knows moving the cargo vessels from California to Florida could take a staffing and scheduling change, and include a Panama Canal fee, but first and foremost, the mindset on the West Coast needs to change.

"You’ve got to quit looking at that trade route that you’ve been using since the '70s and look to more efficient routes to move goods," he said. "At the end of the day, it’s probably cheaper to come up through the Panama Canal and up to a Florida port and move that stuff out of there."

RELATED: Behind the scenes at the Port of Tampa