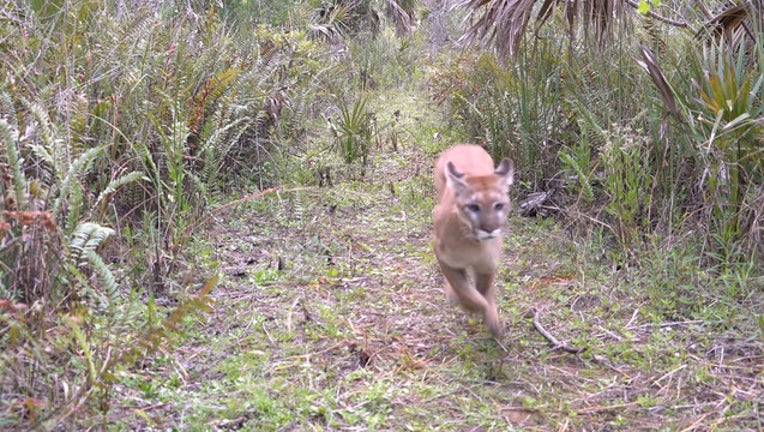 In 2018, a Florida panther and her two kittens were released back into the wild. It was the first time FWC rescued, rehabilitated, and released a family of endangered animals. (Photo credit: Carlton Ward Jr. in partnership with FWC)

TAMPA, Fla. (FOX 13) - Within the past six years, the cause of death for most Florida panthers hasn't been a natural one.

Since 2014, 190 panthers have died in Florida -- and 147 of those died because they were struck by a vehicle, according to the latest statistics by the Florida Fish and Wildlife Conservation Commission. This means roughly only 23 percent have died from natural causes or after fighting among their species.

So far in 2019, according to FWC, there have been a total of 12 panther deaths in the state: 9 died after they were hit by a car, one died from an unknown cause, and another died following intraspecific aggression, meaning it was killed by another panther.

The most recent fatal collision involved a 1-year-old male panther. Its remains were found in May in Lee County near Wild Turkey Strand Preserve.

Below is a further breakdown of panther deaths as a result of vehicle collisions:

In 2015: There were a total of 42 panther deaths. Among them, 30 were fatally struck by a vehicle. It may also be worth noting, one of the deceased panthers from this year died of a gunshot wound.

The majority of those fatal collisions occurred in Collier County. Out of the 147 panther deaths caused by vehicle collisions since 2014, 81 occurred in that Florida county.

FWC officials said encounters with the endangered species typically occur in southwest Florida, or south of the Caloosahatchee River. They are usually found in rural parts, but as human populations grow, suitable habitats for panthers shrink. Sometimes they venture out to main highways surrounding their established homes, such as the Florida Panther National Wildlife Refuge, which is located in Collier County.

Over a century ago, Florida panthers roamed most of southeast U.S. and they were breeding among puma populations at a healthy rate.

That all changed starting with early European colonization and through the 19th Century. FWC said the panther population started to decline and became geographically isolated from other puma populations. The result led to inbreeding in panthers which had a negative impact on genetic variation, and, ultimately, their survival rate and fitness levels.

They were listed as an endangered species on the federal level in 1967. Now, the species is "restricted to less than five percent of its historic range in a single breeding population in southern Florida," according to the U.S. Fish and Wildlife Service.

There have been promising signs for the endangered species. Between 1973 and 2016, female panthers and kittens have not been documented north of the Caloosahatchee River. However in 2016, FWC officials say there was evidence that a female panther was in Charlotte County. The year after, they said the female mated and produced two litters of kittens.

Male panthers have also been sighted as far north as Georgia.

Wildlife officials believe there could be anywhere between 120 to 230 adult panthers in the Sunshine State.

LINK: To learn more about conservation efforts for the Florida panther, head over to FWC's website or FWS's website.