Cynthia Smoot signs off for the final time at FOX 13

FOX 13's Cynthia Smoot says a final goodbye to all the viewers after a 25-year career in the Tampa Bay area. After countless stories, and an Emmy Award for her excellence in journalism, Cynthia is retiring from her position as co-anchor of the 5 and 11 p.m. broadcasts at FOX 13 News.

TAMPA, Fla. - After 25 years, countless stories, and an Emmy Award for her excellence in journalism, Cynthia Smoot has retired from her position as co-anchor of the 5 and 11 p.m. broadcasts at FOX 13 News.

In FOX 13's Cynthia Smoot's final broadcast, we celebrate her amazing career in news. In the field, Cynthia's passion was covering stories about domestic and wild animals – from Africa to Florida and beyond.

Before her final broadcast, FOX 13 showcased some of her most notable stories and memorable moments on the air.

In the field, Cynthia's passion was covering stories about domestic and wild animals – from Africa to Florida and beyond.

JUST RECENTLY BIOLOGISTS ALL OVER THE WORLD WARNED OF A 6TH MASS EXTINCTION GOING ON RIGHT NOW. WE'RE LOSING ALL KINDS OF PLANTS AND ANIMALS AT AN ALARMING RATE.

Highlights of her career included stories about Winter the Dolphin, Tampa's Big Cat Rescue, Burmese pythons in the Everglades and invasive spiny-tailed iguanas in South Florida.

In 1998, Cynthia received a prestigious Emmy Award for "A Real Life Horse Whisperer," the story of Monty Roberts, who helped revolutionize horse training with his non-violent methods.

FOX 13's Cynthia Smoot is retiring from broadcast news, and we're looking back on some of her favorite stories. This one brought her all the way to California where she told the story of Monty Roberts, who revolutionized horse training with non-violence. She even received an Emmy for it in 1998.

Horses are a personal passion for Cynthia, as well. She advocates for the well-being of wild Mustangs, as well as her own equine friend, Dream.

FOX 13 is looking back on some of Cynthia Smoot's most memorable stories in her 25 years covering Tampa Bay. One of her favorite places is the Pryor Mountains of Montana where a special herd of wild horses live. They're also pretty famous thanks to a filmmaker who has documented their stories for decades.

Before coming to WTVT in 1997, Cynthia spent 13 years at the FOX owned and operated TV station in Greensboro/Winston-Salem/High Point, North Carolina as the 5, 6 and 10 p.m. news anchor.

In North Carolina, she was deeply involved in children's issues and received a number of community awards and honors for her involvement and advocacy on issues relating to foster care and adoption, infant mortality, teenage pregnancy and working women.

Cynthia was also involved with the North Carolina chapter of "Operation Smile," and traveled with the medical teams to Panama and Ecuador to report on the life-changing surgery they perform on children with facial and limb deformities.

Cynthia grew up in Yorktown, Virginia, and received her B.A. in communications from James Madison University.

Fun fact: Cynthia Smoot's career began in radio, where she won awards as a morning news anchor and news director.

Tampa Mayor Jane Castor paid a visit to FOX 13's Cynthia Smoot ahead of her retirement from broadcast news. She proclaimed Tuesday, November 29, 2022 "Cynthia Smoot Day" in the City of Tampa. 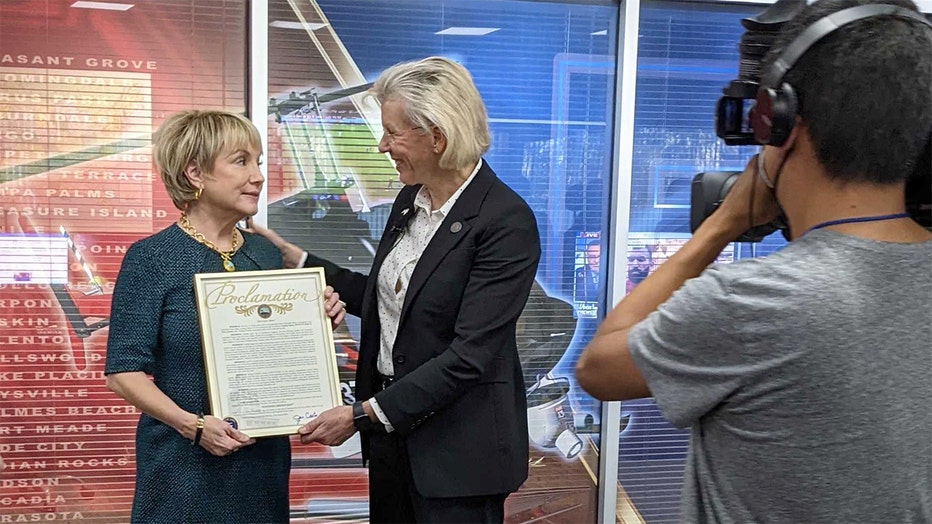