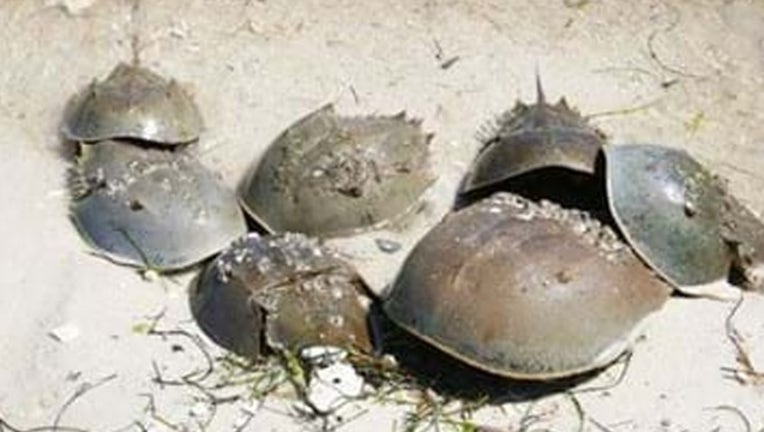 Photo Courtesy of the Florida Fish and Wildlife Commission

Horseshoe crabs have been around for 450 million years, but Florida wildlife officials are still learning about their populations in the Sunshine State. Their numbers have declined in recent decades due to overfishing and loss of habitat.

Because of this, the Florida Fish and Wildlife Conservation Commission regularly asks the public to help them keep track of horseshoe crab sightings.

Horseshoe crabs mate throughout the year, but FWC officials say they are commonly seen along the beach shores during the springtime. They are easier to spot around high tide, within a few days of a new or full moon.

They said beachgoers will likely have the best luck spotting them. To identify mating pairs, marine biologists say to look for a smaller male on top of a larger female.

Red tide may be disapating in parts of Tampa Bay, but the toxic algae's impacts are still rippling through marine life. Boater Jason Bever from Valrico went to a small island between Davis Islands and Beer Can Island where he found dead horseshoe crabs everywhere.

"If you see a horseshoe crab on its back, gently pick it up (holding both sides of the shell) and release it back into the water. Simple actions like this can help conserve this species," according to FWC.

Earlier this year, red tide plagued Tampa Bay and beaches along Pinellas County. One avid boater, Jason Bever from Valrico, took his boat out in August. He ventured to a small island between Davis Islands and Beer Can Island, and says there were dead horseshoe crabs everywhere.

"I pulled up on the sand and I was just kind of goofing around, and I just started to notice, all these crabs were there," Bever said. "I really don't want to pick all of these smelly things up, but I was like, someone's gotta see this, so I just started putting them on the boat, it only took about five minutes to find that many dead crabs to cover the whole top of my boat."

Horseshoe crab sightings can be reported through a survey on FWC’s website.