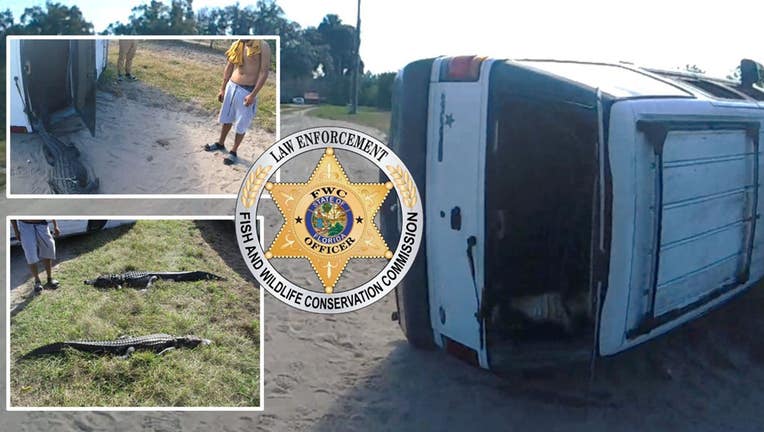 The Florida FWC confirmed that a 6 ½ foot and an 8-foot-long alligator were found "hanging" from the window of an SUV that had been involved in a collision. (Florida Fish and Wildlife Conservation Commission)

Rescue workers never know what they’re going to find at the scene of an accident.

The Florida Fish and Wildlife Commission revealed on social media that one of its officers was called to the scene of a bizarre car accident in Hardee County. According to the report, the incident involved "two people and two alligators."

The Florida FWC posted about the accident on Facebook, writing that a 6 ½ foot and an 8-foot-long alligator were found "hanging" from the window of an SUV that had been involved in a collision.

The officer removed the animals from the vehicle and taped their mouths shut with electrical tape. Unfortunately, this precaution was ultimately unnecessary as the alligators were already dead.

According to one of the drivers, the two gators had been killed earlier that day during a fishing trip. He had been transporting the gators in the SUV when he got into the car accident.

The Florida FWC wrote, "When our officer was asked to assist with a vehicle accident involving two people and two alligators, he wasn’t sure what to expect. Once on scene, he saw a 6 ½ -foot and 8-foot-long alligator hanging from the rear window of an SUV resting on its side. The officer immediately removed them from the vehicle and, just to be safe, secured their mouths using electrical tape."

The post continued, "After interviewing the individuals, one of them finally admitted to killing the alligators while fishing, and then both suspects loaded the gators into the SUV for transport. Both alligators expired and both individuals were charged accordingly."

FWC did not say how the vehicle ended up on its side, only adding that Florida Highway Patrol was investigating the accident.