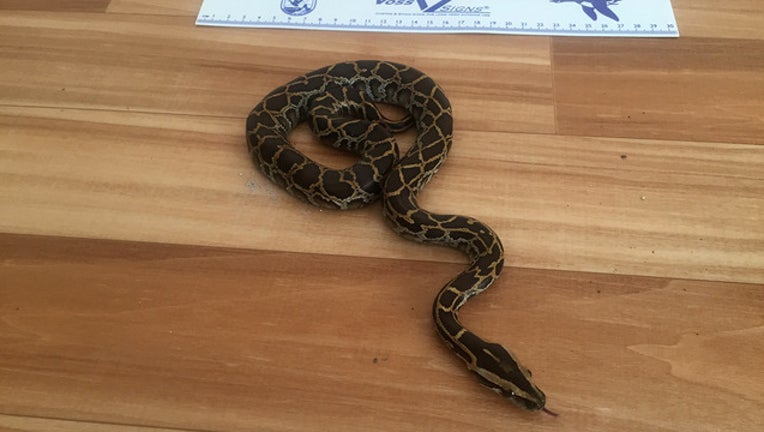 KEY LARGO (FOX 13) - Burmese python hatchlings are showing up on Key Largo for the first time, prompting state officials to warn residents to be on the lookout for the baby snakes.

Between August 2 and August 23, the Florida Fish and Wildlife Conservation Commission says, three hatchling-sized Burmese pythons were found on the island.

"These observations suggest that pythons have reproduced near this location, but there have been no sightings of python nests or eggs in the area," an agency spokesperson wrote.

FWC officials say the agency's exotic species hotline has received 31 "credible" reports of Burmese pythons in the Keys over the past five years, with recent confirmed sightings limited to Key Largo.

“While we have documented Burmese pythons in the Keys for a while now, this is the first time we have documentation of hatchlings in the area. This is not surprising considering the proximity to the known breeding population in the Everglades,” said Kristen Sommers, section leader of the FWC’s Wildlife Impact Management Section.

Residents will be getting postcards in the mail from FWC warning them to be on the lookout for the invasive snakes. The fliers show a picture of a python and list a phone number to call if someone spots one.

“We’re sending the postcards in an effort to collect more information on where and how often pythons are being sighted,” offered Bryan Falk, a USGS biologist. “This information will ultimately help all of the agencies involved focus our research and control efforts in areas where python densities are highest, and hopefully mitigate their further spread. We worry about pythons becoming established in the Keys because there are several at-risk populations of small mammals, like the Key Largo woodrat and the Key Largo cotton mouse, that would be easy prey for Burmese pythons.”

Residents and visitors can help by reporting sightings of Burmese pythons and other nonnative species to the FWC’s Exotic Species Reporting Hotline at 888-Ive-Got1 (888-483-4681), online at IveGot1.org or by downloading the free “IveGot1” smartphone app.